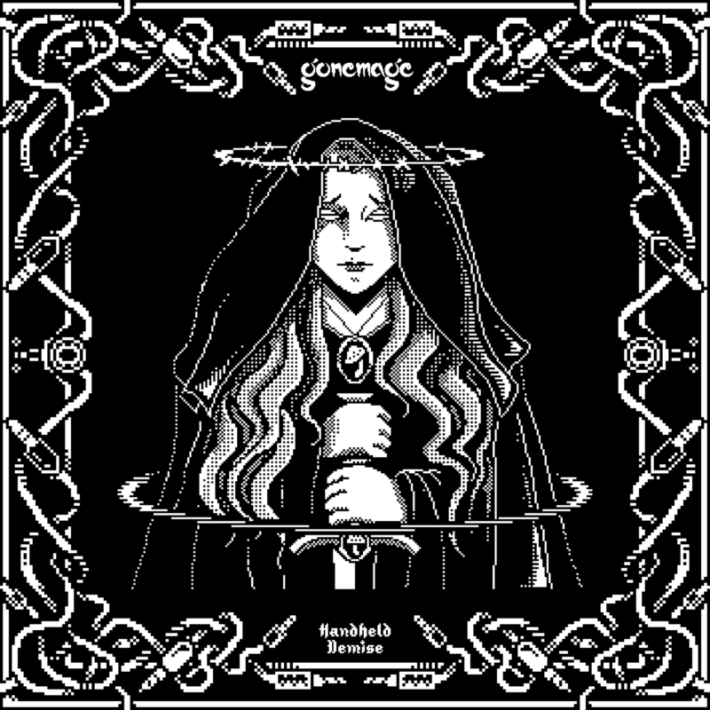 Out of a whirlwind of distorted 8-bit sounds and black metal reminiscences there comes Gonemage. A one-man-band from Texas, its mastermind released the third album Handheld Demise just about a month ago. We had a delightful chat about the influences behind this project, its enthralling lore, and how the hell did he manage to achive that sound.

Hi, this is Rick! Introduce yourself to the readers of Metal Utopia!

After listening to Handheld Demise for the first time, the one question that quickly came to mind is – which instruments did you use to record it?

Great question; I hoped that it would spark an interest in those curious. Traditional instruments in guitar (DiPinto Galaxie IV), bass (SX VTG), and the rest are virtual instruments! The drum program I used is GGD Modern Massive but I ‘retro-fied’ it to not be as thick, more of a subdued rocking sound.

Two plugins were responsable for all the synth sounds: Super Audio Cart (the most complete virtual instrument for retro video game console sounds), and TweakBench Peach (a free instrument based on NES sounds).

I can only describe Gonemage’s music as absurd and incredibly layered: there are so many musical concepts mixed and intertwined, however no component ever feels secondary. Would you guide me through the process of imagining, and writing the music for one of your songs?

Absolutely. Typically, I start with getting drum patterns down to act as a “drummer” for me to jam along with so that I can formulate guitar riffs and maybe 90% of the structure of a song starts out this way.

Once I deem the structure as near finished, I record all guitars over the drums and then bass. After this is where I go into a deep dive of tweaking and methodical puzzle-piecing with synths, guitar leads, hyper focusing on drum fills/accents for realism. Vocals almost always come last after this stage.

Handheld Demise features loads of collaborations with other artists. Why did you decide to have so many guests, instead of a more “single-player experience”? Did you write their parts before asking them to play with you? With whom did you enjoy collaborating the most?

I designated all the parts in a timestamped fashion before asking each guest but I let them express their vocals however they saw fit. I gave some notes in terms of «Maybe a high falsetto here… or loud long scream there», but mostly let the guests feel it out.

Tough to say who I had more fun collaborating with but I’d say the most surprising is Mirai of SIGH. I wasn’t sure if he would be interested but he knocked it out of the park with his signature delivery!

Gonemage’s music is inspired by retro videogames music which soundtrack are your favorites? Which ones were your main inspirations?

You started Gonemage as a “spin-off” of a Cara Neir album, right? What made you want to go all the way and start a proper side project? Back then did you imagine you’d publish so much music under this moniker? This is your fifth release!

That’s correct. It was a whimsical decision at first because I wanted to expand upon this video-game inspired ethos from Cara Neir‘s Phase Out, but that project is always shifting sounds long-term so I just wanted to keep going in that direction but with a new project. I didn’t imagine I’d make as much under Gonemage when I first started it but every time I get an idea I’m quickly brainstorming and writing!

I read that all the Gonemage albums, plus albums by your other bands (such as Cara Neir), share a common narrative universe, and they tell a story. Can you expand on that, give me a quick summary of Gonemage saga?

For sure. So Gonemage is an alternate timeline to the Cara Neir Phase Out album story arc.

Phase Out is about me and Chris [vocalist of Cara Neir] being warped into a retro video game universe by an alien entity known as The One.
This antagonist has been more latent, a behind-the-scenes figure in Cara Neir‘s discography prior, not necessarily albums about him, just little pockets of mention in the past throughout albums. Now with him as a main feature, he subjugates us into a video game gauntlet where we must fight through each level and eventually attempt to best him.

Gonemage‘s timeline starts at this warp point, but a different entity known as The Curator extracts a version of myself, or my character, into a dream realm. She’s seen as a magical protector of dream realms and chooses my character to become her protege. Eventually, my character goes through a corrupt story arc with power through a mystical paintbrush that The Curator bestowed upon him.

You are a man of many bands and even more projects. Why do you prefer, as it seems, to split your creative production under different names? And to new listeners, where would you advise them to start from?

It starts with a compartmentalization of concepts, to where I want certain projects to adhere to, either totally separate or somewhat related to another project, but still being its own thing. I like making a lot of different music, so it’s tough to keep one name when I get a lot of different ideas going!

If new listeners want something heavy, I recommend my old death metal project Sallow Moth or early Cara Neir like Portals To A Better, Dead World. Or if you want something totally fresh, start with Gonemage and work your way through the growing discography. If you want something unsettling, check out Homeskin: you can seen it as an alternate ego of Gonemage but not story-wise, just thematically.