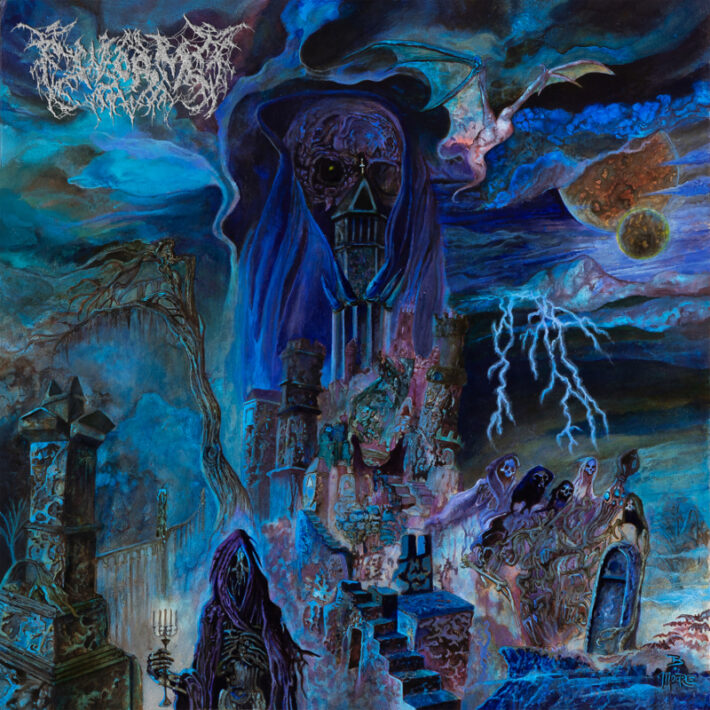 Who up playing with they Worm?

If you’re living under a rock, Florida’s Worm exploded in popularity last year with their magnum opus Foreverglade, a monstrous record of murky death doom that took home bronze on my 2021 Album of the Year list. It’s no secret I love this band. I’m wearing a Worm shirt and a Worm hoodie, clutching my limited neon-violet pressing of Foreverglade and prostrating myself in reverence at the foot of the shrine to Phantom Slaughter I’ve constructed in my musty bedroom. When I heard that Worm were dropping a new EP less than a year after the release of Foreverglade, featuring newly-added member Philippe Tougas on lead guitar, I was nervously excited. Like any devoted metalhead, I want my heroes to make more music, but I am also equally afraid of change.

The addition of Philippe Tougas (First Fragment, Atramentus, Funebrarum, et al) adds a new and unique dimension to the Worm sound. Foreverglade made use of lead guitar primarily at critical moments, while Bluenothing has lead guitar take center stage. Philippe has the monster ability to rip a guitar solo through the murk and have it fit naturally. What hasn’t changed is Phantom Slaughter’s mastery over atmosphere. The title track “Bluenothing” is dense and suffocating, a cohesive atmosphere enforced by synth and clean guitars that endures through the heavy riffage throughout the track. The atmosphere and heavy sections in this song are sure to be familiar if you’ve heard Foreverglade. With dynamic phrasing and some of the heaviest riffs on the EP, the 11.5-minute title track is easily the centerpiece of Bluenothing. In fact, the promo material notes that “Bluenothing” was at one point meant to be the closer of Foreverglade, but Phantom Slaughter presumably decided to shelve it, writing the rest of Bluenothing around the monolithic song.

“Centuries of Ooze II” is an interesting sequel to the original, with crushingly heavy riffs highlighted by ethereal cleans and a spooky organ. This track leans into funeral doom more than anything on Foreverglade, but Worm nail the aesthetic. “Invoking the Dragonmoon” is an ethereal interlude that features a soaring guitar solo, before the promotional single “Shadowside Kingdom” carries the EP to its finish. The closer begins with atmospheric clean guitar, some spooky layering and another solo, before the band kicks off into a black metal-style blast complete with soaring guitars and huge drum fills.

The use of “Shadowside Kingdom” as the promotional single is a bit of a misdirection; many people expected Worm to be fully going for a black metal sound, but the full EP shows that that is not the case. The promo material declares that “… the Foreverglade-era of Worm is ceremoniously put to an end, and the next chapter in the fanatical saga opens…”, and while it’s a shame the Foreverglade era has come to an end, the future for Worm seems to be equally as promising. I’m still onboard the Worm hype-train, and it’s chugging along as strong as ever. This band is quickly becoming a powerhouse of the underground and it’s fantastic.

I’m always up playing with my Worm.