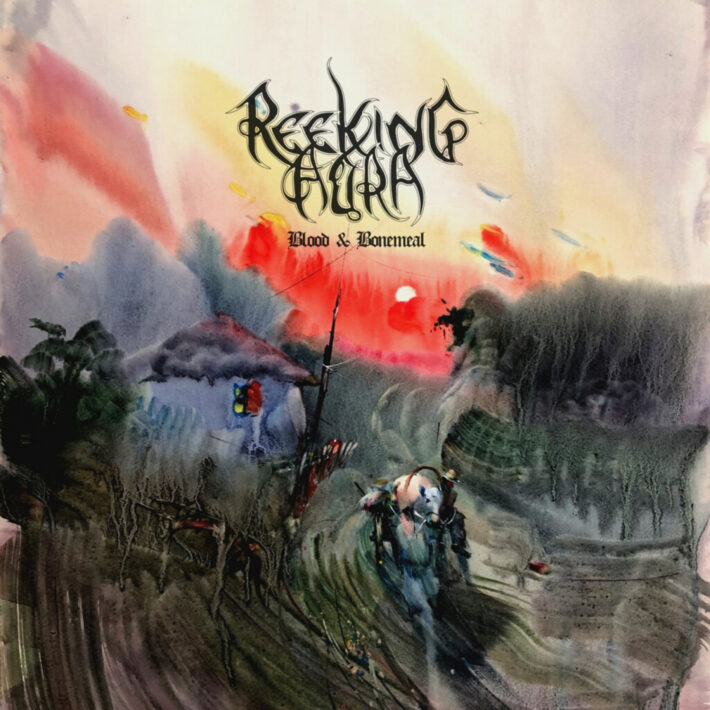 Reeking Aura call themselves death/doom “in the old school tradition.” I guess. This slowly-paced, often ethereal death metal group from New York are releasing their first full-length record, Blood And Bonemeal, on Profound Lore Records. They’ve previously released one EP. For a death/doom release, the record sounds fairly lively until the bottom drops out.

Will Smith’s vocals make any album better, Blood And Bonemeal included. His guttural growls seem an octave lower than everyone else’s. Reeking Aura makes good use of his basement-level professions, and it’s nice to hear him on a more direct project than Artificial Brain or Afterbirth. While I love those bands, Reeking Aura’s less technical approach lets me really wallow in his verbal filth.

Without looking up Reeking Aura’s information, I would not have guessed that there are three guitars on this record. The good news is that Blood And Bonemeal is not doomed to complications and bloat. The bad news is that this is somewhat of a waste of a unique band setup. There are some nice moments where they combine a typical death metal crunch with a wailing guitar over the top. While those moments are satisfying, for the most part the band’s guitar tone just sounds overly thick.

The drums and bass never really stand out on Blood And Bonemeal, but neither hinder the record either. Some of Sam Shereck’s beats create fully-fleshed out walls of sound under the mountain of guitars. Some just feel like holding pattern blast beats. Between the variety of guitars and Smith’s low vocals, I occasionally had trouble hearing the bass, but when it’s prominent it functions as well as the other string instruments.

The riffs on Blood And Bonemeal are bone-simple goodness. This record borders on caveman death metal, only to turn on a dime into something entirely different. Sometimes that’s a wailing guitar solo that is delightfully full and virtuosic. These moments are added by the direct nature of the main guitar riffs. The musical depth in this case comes from the writing’s layering instead of any melodic lines, which works nicely. Reeking Aura manage to create direct music that unfolds into something intriguing, and they’ve done it through intricate, thoughtful songwriting practices.

Sometimes, such as at the end of the title track, the metal drops out entirely and you get something closer to an ambient passage. Reeking Aura use this variety well. Songs stumble to a pause and then look around uneasily, waiting for that gurgling creature to enter the album again. This gives the record an ethereal quality for something so brutal. These outros usually last slightly too long, but this seems to be intentional as it adds to the anxious feeling that Blood And Bonemeal generates. “Harvesting The Hatchet” contains the first true prolonged atmospheric passage, lasting for multiple minutes instead of the much shorter outros of the previous songs.

Unfortunately, the tracks are a little too similar to each other despite the variety of atmosphere. The simple riffs are all simple in a similar manner. There’s not a huge variety in Smith’s vocals, great as they are. Though the tempo picks up at points, this never manages to shake the mid-tempo death metal feel that lasts throughout all the death metal sections of Blood And Bonemeal. The triple guitar attack is used in the same manner on almost every song. We end up with a record that feels longer than its short runtime. I’m not entirely sure how a band creates an album with this much variety and intention that ends up feeling this standardized, but Reeking Aura managed.

Blood And Bonemeal effectively does what it says on the tin: death metal with some doom elements and low vocals. I had a great time with it, but it does feel like Reeking Aura aren’t quite up there with the death metal’s best. If you’re looking for solid riffs, deep vocals, and music that is both heavy and well-put together, here’s Reeking Aura. Enjoy them.