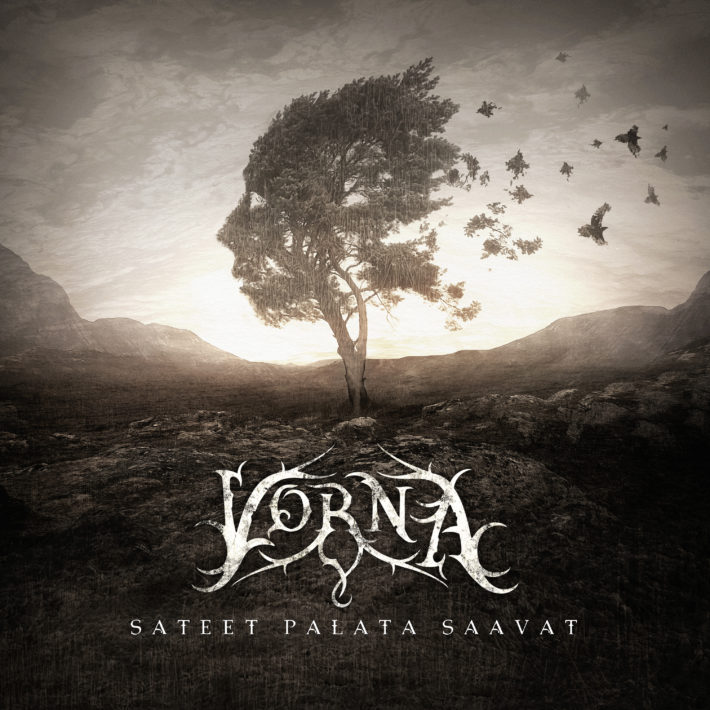 As summer has officially come to an end, the days of going out to enjoy the nice, sunny weather are getting less and less frequent. The sun tends to hide behind the clouds more often and the rains will return. The semi-melancholic feeling this change brings about is beautifully portrayed on Vorna’s upcoming record Sateet Palata Saavat (The Rains Will Return). The six-piece band from Finland has already released two albums before this one and make melodic black/folk metal with atmospheric and symphonic influences, like choirs and a piano.

From the first spin it was already clear that Sateet Palata Saavat is a solid record. There’s a lot of variety in musical style, rhythm, and ambience. There’s raw black metal passages, but also piano and strings. At times, the drums are so fast it’s like they’re played on a machine, and other times it’s the silences in between the beats that create the music. And it’s not just the instruments that are diverse: the vocalist also portrays a wide range of vocal styles. He lets out agonizing screams and deep grunts, but also beautiful, clean vocals that many a singer would aspire to match.

The record starts with an intro of strings playing a light melody that contrast with sounds of thunder in the background. The music slowly gets more and more intense, building up into a full-blown symphonic track that leads up to Toinen, the first full song of the album. It starts off with a black metal drum beat, immediately showing the band’s ability to play intense music. After a while, there’s a piano that plays kind of a duet with the lead guitar, evoking a feeling of melancholy or nostalgia. About halfway through the song, there’s an interlude with an organ that lays the foundation upon which the other instruments build up the music again, back to its original intensity. Every song sounds different, but the overall feeling of melancholy is present on all of them. So is the case with Maa martona makaa, on which the guitar plays a countermelody to the piano, really giving the song that finishing symphonic touch. On the next song, Aalloista, there’s multiple clean voices that sing in harmony, after which the lead guitar takes over and continues the melody. After a while, there’s an interlude in which the piano plays a duet with the strings, accompanied by the rhythm guitar, another example of Vorna’s ability to write symphonic passages that are charged with emotion. The last song, Kauas, is the perfect finale to the record. It starts with a piano, over which the vocalist sings in a clean voice. Over the next few minutes, the song gets built up with instruments joining and getting more intense. The clean guitar gets distorted, the clean vocals turn into grunting, and the drums get faster and faster. As the cherry on top of this already great record, when the song reaches full intensity with a full choir singing the chorus. Every instrument plays different melodies, blending in perfectly with one another. Finally, all that’s left is the choir, leaving the listener in awe as the record ends.

In short, Vorna’s Sateet Palata Saavat is a tremendous album. It’s diverse, with intense black/folk metal passages as well as calmer, symphonic parts. The vocals are no less wide-ranging, with both raw grunting as well as a beautiful clean voice. The piano, among other factors, gives the album a general feeling of melancholy or nostalgia, especially when combined with strings or other atmospheric elements. With this record, the band has proven their ability in playing their instrument, as well as in composing a record, because they haven’t just released an album, but also an experience.