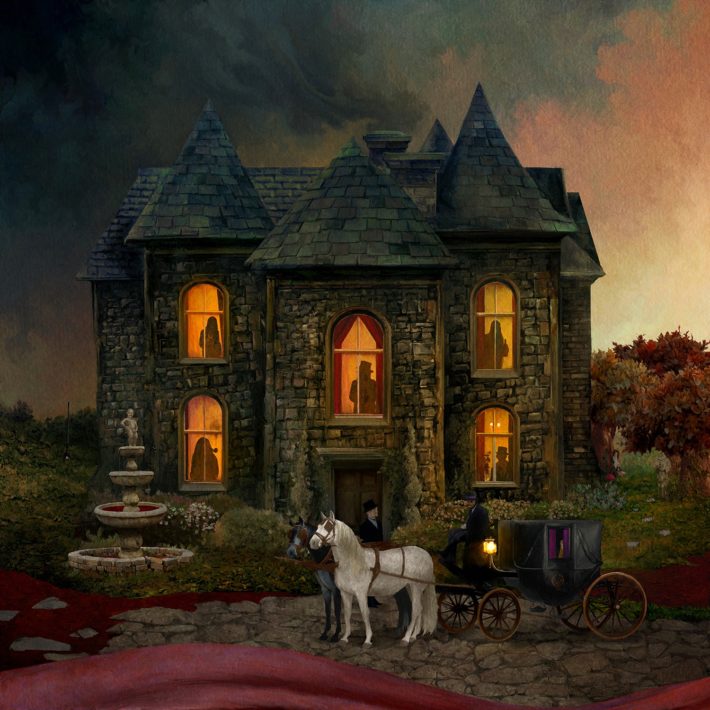 Let’s just get this out of the way at the start: In Cauda Venenum is not Blackwater Park. Maybe Opeth will one day return to the acoustic-blended-with-death metal sound that made them famous, but that day is not today. The band has turned a page in their career, and they aren’t ready to turn back yet. However, In Cauda Venenum is not Sorceress either. In Cauda Venenum has a lot to offer despite the band only using part of the range they used to have.

In Cauda Venenum starts with possibly the weirdest intro that Opeth has ever made. The primary focus of “Garden of Earthly Delights” is wordless vocal harmonies over a small variety of instruments and sounds. This is a fitting introduction to the album, as Michael Åkerfeldt’s vocals shine bright throughout In Cauda Venenum. His singing is some of the most impressive that I’ve ever heard from him, with a large range, significant dynamic shifts and impressive emotion. Almost all of the abundant harmonies throughout the album are interesting and attention-grabbing. It shouldn’t be possible at this point in his life, but In Cauda Venenum might be a highpoint of Michael Åkerfeldt’s singing career.

Fredrik Åkesson’s guitar work also stands out. Some of the slower guitar solos have a definite David Gilmour vibe to them. The acoustic sections sound precise and exact while still maintaining an organic feeling. All five band members are fantastic musicians, of course, but the vocals and guitars stand out as exceptional.

Some of the complaints that I’ve had about the second half of Opeth’s career are mostly gone. Early on, Opeth would create interesting moments by contrasting their death metal aggression with their contemplative acoustic moments. This allowed them to smooth over some cracks in their songwriting and helped them create ten minute long tracks that didn’t collapse under their own weight. When they replaced death metal with prog rock, some of the cracks started to show. Without being able to maintain interest by having a drastic change in musical style, Opeth frequently just didn’t manage to maintain interest at all, and large swaths of their weaker albums have been boring as a result. The partial solution on In Cauda Venenum is two-fold: first, the songwriting is simply better than it has been recently. The cracks can’t show up if they don’t exist in the first place. Second, this album introduces significantly more vocal harmonies and musical variety than I’ve heard from the band before. There are spoken word samples, blues-y tracks, laughter, the works. This allows Opeth to have the variety that they desperately need when the music would otherwise last far longer than it should.

Unfortunately In Cauda Venenum still drags in places. This is a 68 minute slab of prog, and there’s only so much that can be done to not have weak spots in an album like that. There isn’t much aimless wandering, but In Cauda Venenum could still stand to be a little shorter, specifically in “Next of Kin” and “Lovelorn Crime” (these aren’t bad songs, they just don’t quite support their length). The first time I got through the album, I simultaneously thought that the album was too long and was surprised that In Cauda Venenum was over already.

This is the heaviest album that Opeth has made in quite a while. There is a genuine sense of a driving force in places, something Opeth has been sorely lacking in recent releases. In Cauda Venenum gets somewhat softer as the album goes on, but this flows naturally.

Part of the reason for that flow is the songwriting process. Apparently, Åkerfeldt wrote this album basically in secret and on his own, and only informed both the label and the rest of the band when it was almost done. The result is a cohesiveness that helps the progressive elements of the music, as the sounds are able to actually, well, progress. Yes, as stated there are parts of the album that drag. But there is much less of this than I was fearing there would be.

On the scale of Sorceress to Pale Communion, In Cauda Venenum is definitely on the Pale Communion side of things. This isn’t the best album the band has ever made, but it is still excellent. By their current standards, Åkerfeldt and the rest of Opeth have bounced back. By the lofty standards of their entire career, Opeth’s latest entry belongs with the band’s better albums. Hopefully In Cauda Venenum signifies that Opeth has gotten over the growing pains of switching genres and will be consistently amazing again.