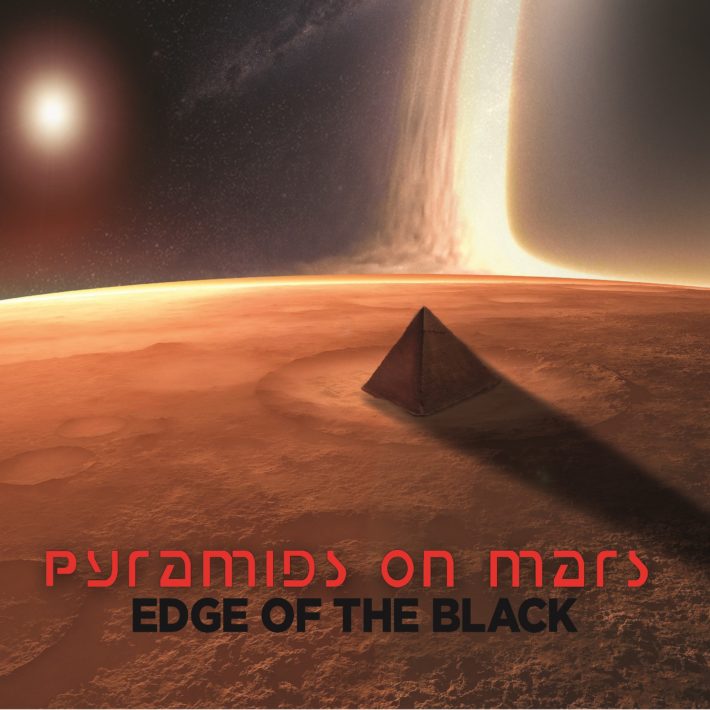 Metal is a wide genre, with plenty of music made by plenty of people from plenty of different backgrounds. This year, I have reviewed, among others, albums from bands such as Opeth, Nile, and Blut Aus Nord. These are major artists that have toured the world, have the backing (sometimes) of major studios, and have years of experience, feedback, and expectations. Some albums that come to my ears are closer to the new Pyramids on Mars album Edge of the Black. This album was written, produced, mixed, mastered, promoted, and self-released by Kevin Estrella, who also played every instrument and who definitely did not have as big a budget as the previously mentioned artists. Is it fair to compare music made in such disparate conditions? Unfortunately for Pyramids on Mars, all of these albums compete for listening time regardless of their origins, and all will either reach their destination or drift endlessly in space no matter what planet they launched from.Edge of the Black is an instrumental prog-rock album with a prominent solo guitar and somewhat muddy production. There are two major pitfalls that can await instrumental music: A lack of focus, and a lack of variety to the sound. On Edge of the Black, Estrella avoids the first problem…sometimes. Humans seem to be very attuned to hearing human voices, and so vocal music doesn’t even consider the problem of aimless wandering with no clear focus point. Instrumental music can live or die by this focus, as a lack of a clear main line can take away any purpose to the music and destroy any sense of engagement the listener may have. Estrella somewhat solves this problem by simply writing melody lines for the guitar and treating it as a solo instrument. The lead guitar isn’t always present, and when it is there sometimes it just riffs with no thought, but for a decent chunk of time, the guitar clearly and obviously assumes the lead instrument role and it works well enough. This makes Edge of the Black sound quite a bit like old Joe Satriani albums in some ways. In fact, Satriani is an obvious  influence to Estrella, even if you haven’t read the promo material in which Estrella quotes himself as saying that he sounds like if Satriani joined Rush and says that he views this album as being similar to Surfing With the Alien. The lineage is direct and casts a shadow over this release.

Joe Satriani is an exceptional musician, who is extremely difficult to emulate. Kevin Estrella does his best. The shredding is there, the emoting is sometimes there, the catchy melodies are sometimes there. Unfortunately, the full range of the guitar isn’t. Satriani was able to make his guitar sing the same way a vocalist would, with plenty of tone changes, varied articulation, and clear command of the instrument. Estrella plays like a guitarist and doesn’t have the same range or ability as his apparent idol. Don’t take this the wrong way-the guitar playing on Edge of the Black is actually quite good most of the time, it’s just not Satriani levels of good, nor is it quite good enough to carry the whole album. Some greater variation in songwriting or guitar style would help alleviate this issue, but as Edge of the Black stands, there isn’t enough to hold interest for the entire record.

There is the second pitfall I mentioned earlier, a lack of variety to the sound. Estrella is already fighting from behind here by making an instrumental album so obviously in the style of a different musician. The Bach feature is a nice touch, and Estrella has a good performance. “Whale Song” is also quite a different sound than expected, but these final two tracks don’t help the first eight on the album and don’t do enough by themselves to make the album dynamic. I could just go listen to Surfing With the Alien instead of Edge of the Black, as there isn’t anything that Estrella adds to the old formula here. This is a problem for every genre, but it especially stands out in instrumental music because the lack of vocals tends to cause the lead instrumental style and songwriting to gain prominence. They are too derivative. Additionally, Estrella is a much better guitar player than he is a soloist, if that makes sense.

As a labor of love, Edge of the Black is a great accomplishment. Kevin Estrella obviously has a style that he wants to play, and he has enough talent to see the album through with some bright moments. From a listener’s perspective, there isn’t enough here to make this an album for any but the most enthusiastic fans of this style. The guitar riffing is good enough to make Edge of the Black have redeeming qualities, but it isn’t good enough for this to stick around in my listening rotation. If you can’t get enough Satriani in your life, though, this is worth a shot.