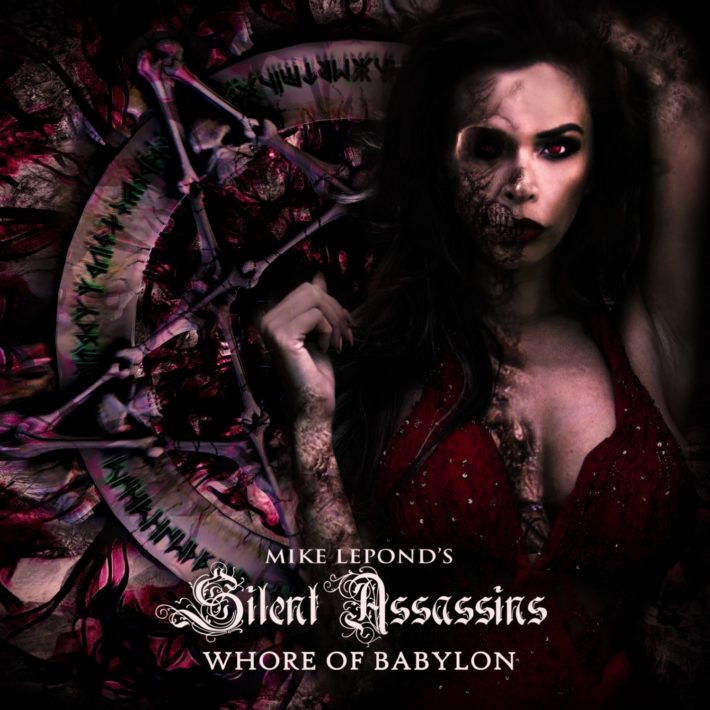 There are three major categories of bands with terrible names. The first, bands such as Shitfucker, need no more explanation. The second, bands such as Eximperituserqethhzebibšiptugakkathšulweliarzaxułum, are frustratingly incomprehensible and prevent a fan from actually talking about the band. Mike LePond’s Silent Assassins fall into the third category: Bands that sound like they played rockabilly forty years ago and that broke up after three separate instances of a band member choking to death on their own vomit in the back of a Toyota Tacoma. Despite this problem, this particular band very deliberately uses their brand to their advantage, as Mike LePond is a name that might be familiar to some of you.

Whore of Babylon is the third full release from Mike LePond’s Silent Assassins, whose named leader is better known as being the virtuosic bass player from Symphony X. If you’ve listened to Symphony X at all in the past, then nothing on Whore of Babylon will surprise you. This is power metal sitting comfortably in the pocket and with thorough musicianship and confident mastery of the genre. This album consists of ten tracks that are varying flavors of historical stories-some are flavored descriptions of historical events, some are popular tales from history.

The sing-along choruses are the backbone of this release, so it’s a good thing they’re always tolerable at worst. Rather than try to moderate their passions, Mike LePond’s Silent Assassins let cheesus take the wheel. The result is entertaining as hell. I worried about the risk of flat choruses, but it is no surprise that someone from Symphony X could write choruses this infectious. The choruses gave every track a fall-back plan for when the meandering instrumentals started to show some wear and tear, and it was a successful fall-back plan in every single case.

Unfortunately, that fall-back plan was needed a lot. The guitar solos, instrumental passages, and various attempts at fleshing out the rest of the songs had a tendency to feel flat and hollow. Everything that was needed for an excellent album was there, but the pieces had a tendency to repel each other. It felt as if the band didn’t bother to finish stitching up the music because they didn’t care. Considering LePond’s comment “jamming with these guys is a no stress situation,” I suspect that this is actually the case. This is less a project about creating music that the fan will consider good, and more about rocking around and creating fun moments in the studio. That fun tended to spill over in the choruses, so it worked out, but the somewhat lackluster instruments strained that fun. The instrumental performances excelled throughout, this hollow feeling was entirely a songwriting problem.

It might be unfair to compare a side project like this to the main attraction, but I couldn’t shake the feeling that this was a discount version of Symphony X. Nowhere was this more present than the vocals. Vocalist Alan Tecchio has a love it or hate it type of voice, and I frequently oscillated between the two while listening to Whore of Babylon. He is able to do what is required of him, and possesses a very typical 1990s power metal tone. Occasionally the nasally feel overwhelmed what could have been a better performance. Other times, that same nasally feel perfectly complemented the sense of fun that the band was going for. I would have loved a more consistently engaging performance, but that might have removed part of what made Whore of Babylon a work of love.

Whore of Bablyon will not show up on any end of year “best of” lists, but it was never supposed to. This feels like three excellent musicians showing up to play the tunes that they wanted without a care as to what anyone else would think. If Symphony X is a gourmet meal, Mike LePond’s Silent Assassins is fast food. Tasty, tasty fast food. You might enjoy it every now and then.