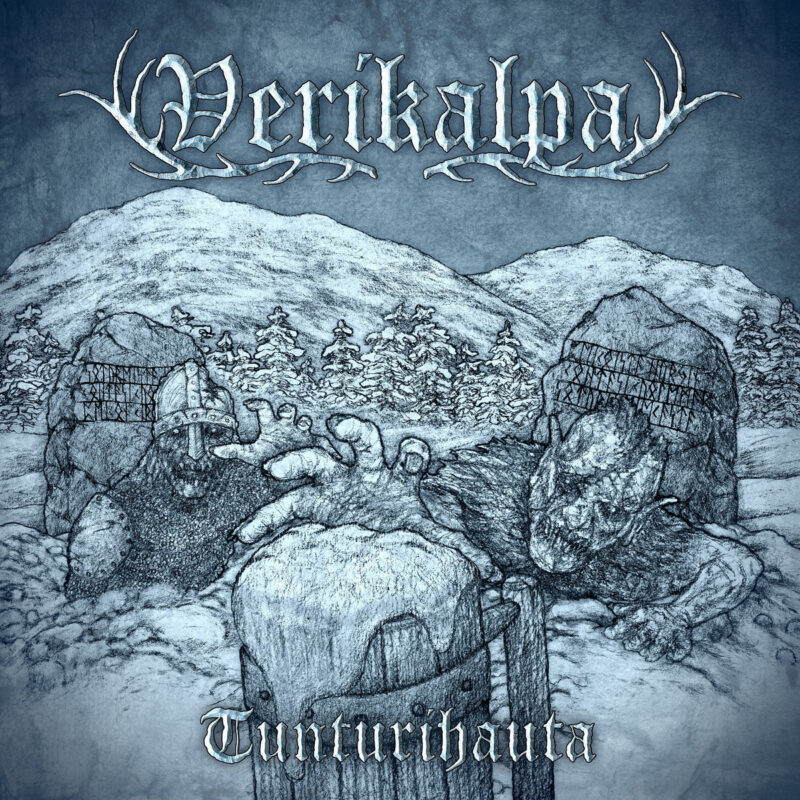 Sometimes, listening to metal can be exhausting. So many bands take themselves so seriously, creating grand compositions and insisting their work is the ultimate form of art. After all, what makes music good? Why is good music good? Tough questions, right? Well, none of that matters right now. Today we’re talking about folk metal.

I think it’s safe to say I am the “folk metal guy” here at Metal Utopia. Swiss folk legends Eluveitie are my all-time favorite band. I reviewed Ensiferum for my debut review (another of my favorite bands), and now I’m reviewing their fellow Finns in Verikalpa. As the resident folk metal guy, I can tell you there are really only three types of folk metal. They are as follows: folk metal for drinking, folk metal for riding into battle, and folk metal for complete nerds. Can you guess what category Verikalpa falls into? That’s right, fill your steins with ale boys!

I enjoyed Verikalpa’s last record, Tuoppitanssi from 2020. It was my introduction to them, and I found it a fun and jubilant yet suitably heavy fusion of Finntroll, Korpiklaani, Turisas, and others. I particularly liked the prominent role the accordion took on that record. Their melody writing and general ability to write a catchy riff and combine it with an addictingly bouncy accordion line helped that record stand out. On their newest record Tunturihauta, the trend of their melodic writing bearing the weight continues.

Also, as an aside; my apologies to any Finnish readers we may have. Due to my well-documented history of being unable to speak your exotic language, whatever grand poetry contained in Verikalpa’s lyrics is unfortunately lost on me. Just be glad you don’t have to hear me try to pronounce some of these words.

The record begins appropriately aggressive, and we get an immediate taste of my beloved accordion. I have recently discovered that what I’m hearing is actually a keyboard masquerading as an accordion, which is disappointing. Oh well, I will still refer to it as such. Opening track “Verikauhu” and subsequent track “Kalmoarmeija” feature great accordion lines both shared with and trading off with the guitars, and it works to great effect. “Riitti” has a driving riff off the bat that feels very Ensiferum, and “Raivokansa” features a fun gang chorus with energetic riffs driving along the verses.

While the single “Rautanen Herra” is a fun, aggressive romp – in fact it’s one of the better tracks on the album – I simply cannot ignore how it sounds uncannily like a mix between Finntroll and Korpiklaani. The riffs are characteristically Finntroll while the accordion work and the vocal refrain in the middle are Korpiklaani staples. Despite that, I actually enjoy the song a lot. The title track “Tunturihauta” pumps the brakes, and opts to begin on an icy stomp that nullifies the energy of the previous track. Although the song eventually thaws and accelerates, I felt the beginning was just too slow.

I also noticed “Jotunimmalja” was the most similar stylistically to their previous record, with its steady galloping drums driving along mid-paced riffs. Subsequently, “Taisto”, “Hurmos”, and “Suohon Suotu” have some of the best melodies on the entire album, many of which also recall their previous record. What Verikalpa lack in originality they make up for in simply writing fun records. Verikalpa will never be able to write a folky cacophony better than Finntroll, a triumphant riff better than Ensiferum, or a drinking song better than Korpiklaani. But that’s okay.

Take my numerical rating with a grain of salt: this is by no means a bad record. In fact, if you like folk metal even a little bit, listen to this band. While I found Tunturihauta less varied than its predecessor Tuoppitanssi – and though there is little on Tunturihauta I haven’t heard before – there’s not much here that isn’t enjoyable. I can’t fault them for making a record where I enjoyed almost every song, even if it’s relatively unoriginal. After all, Verikalpa had my toe a-tapping throughout the full runtime. Recalling my bit about tough questions at the beginning of the review: this record is just pure fun, and sometimes we need that. All work and no folk metal makes Jared a dull boy. So, my bottom line is this: check this record out if you like dumb folk metal. Tunturihauta is very much a folk metal fan’s record. I doubt it will convert many to our side, but if you’re a weirdo like me then your ear-holes are in for a fun time.