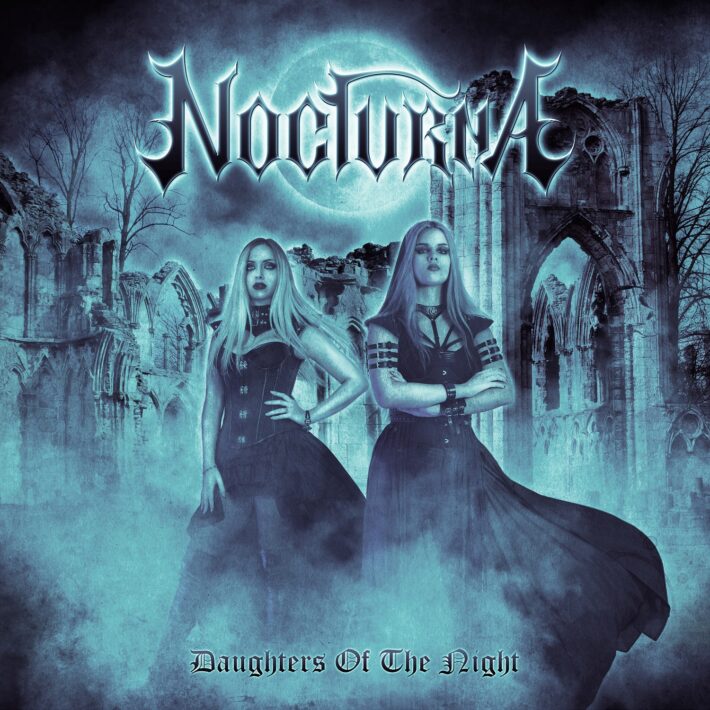 Daughters Of The Night brings symphonic gothic power metal group Nocturna into the world. The band was founded by Frozen Crown founder Federico Mondelli. Nocturna play a driven form of power metal where speed is sacrificed to let the good sounds linger for just a moment longer. Dual lead vocalists give Nocturna the unique feature they need to stand out in a crowd of Luca Turelli acolytes.

I adore these dual vocals. Nocturna make full use of their strengths as they give their vocalists the cheesiest harmonies imaginable on choruses that deform the surrounding space. Standard and boring chord progressions plague the record, and tracks start to sound repetitive and blend into each other in my memory, but I don’t care. The vocals leave me drooling as I stare into space, unable to remember what I was supposed to be doing in a given moment.

However, some of the climaxes and breakthroughs on Daughters Of The Night don’t feel earned. In the moment, all is forgiven as the band ascends to massive heights, but before and after those mountainous marvels the songs take on an odd color. Nocturna could have done a lot worse for a debut record. Still, some of the songwriting choices sound like the band didn’t know how to get from point A to point B correctly, and so they heap glorious melodies onto point B and hope that everyone just lets the stapled-together phrases go. It mostly works, but leaves me feeling vaguely unsatisfied at times.

The larger songwriting failures of Nocturna get more bizarre once you realize that the minor moments are largely effective. The riffs on this thing stand out in a genre known for snazzy riffs. Quiet piano tunes effectively convey a sense of introspective tension followed immediately by bombastic and tight guitar lines that rival what anyone else is doing. These smaller moments obviously had plenty of thought put into them, and as a result Daughters Of The Night isn’t just hopping from chorus to chorus with bland in-between moments that sound like a burden. Nocturna’s writing within a phrase is as effective as their more long-term writing is disappointing.

The biggest problem with Daughters Of The Night is that it gets caught in the gravitational pull of past giants. Nocturna can’t help but throw the very comparisons that could sink this record into your face through their songwriting. Too many moments reminded me too much of Rhapsody, of Dialith, of Unleash The Archers. To a certain degree, who cares? I love all of those bands, and Nocturna just makes for a larger party. The issues arise when I notice those blemishes in the songwriting on Daughters Of The Night. Because I’m already primed to think of other bands, and because I only make these mental comparisons when I’m pulled out of the music due to some moment that didn’t quite click with me, I inevitably end up forming more disappointed memories of Nocturna than the band perhaps deserved.

So, this could have been a lot worse. I certainly enjoyed enough of Daughters Of The Night to not really care about all of these issues I just mentioned, instead letting myself get lost in the sounds of euro power metal. However, I probably won’t end up returning to Nocturna’s debut as much as I could have because, despite my enjoyment, it just feels like the incomplete version of what the band could be. I’d recommend this to anyone who has ever enjoyed a Rhapsody Of Fire record, or for anyone who is as much of a sucker for vocal harmonies as I am. There are a lot of bands who are making symphonic power metal right now, but I’m glad that Nocturna is one of them.