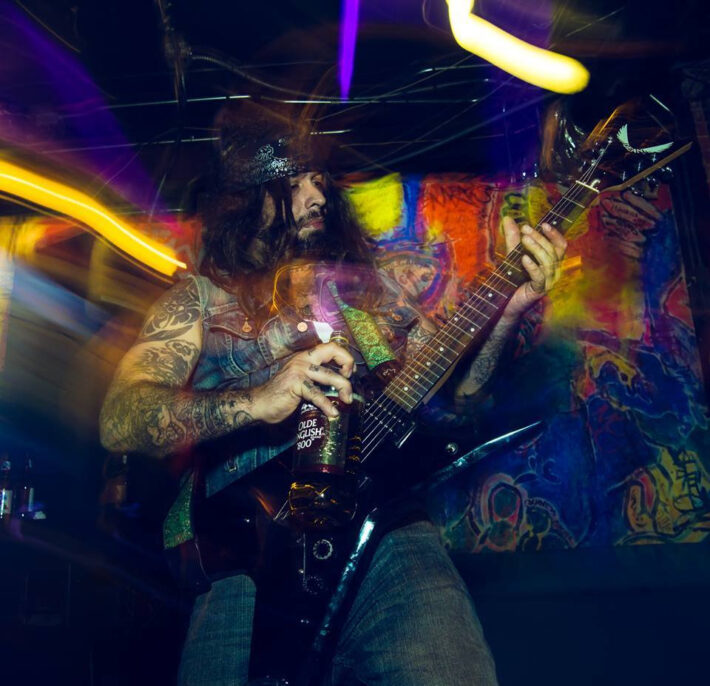 A thick fog of psychedelic fumes comes from South Carolina: Stoner/Doom quartet Space Coke has returned with its third album Lunacy. To celebrate this release, I had a chat with mastermind Reno Gooch.

Hi, this is Rick! Who am I talking to, and what do you play in Space Coke?

This is Reno Gooch. I am the songwriter, guitar, singer and occasionally other intruments in Space Coke.

In your words, Lunacy is «either an escape or an immersion in the madness of humankind»; what does each of these ideas represent, in terms of approach to the music? Are they also different ways of seeing the relationship between art and daily life, as in escapism versus socially involved?

It’s escapism in the sense that art can take us mentally and emotionally out of a world system that we feel is oppressive and wrong for us. I see music, sound and lyrics as sigils; they’re my ritual magick to travel beynd the physical world as we experience it. But also we cannot physically escape this world so there is an immersion even if it’s against our will.

The title Lunacy reflects the escapism in its invocation of the moon, and immersion in its meaning of insanity. The songs are spells. They will affect you whether you accept that or not.

Are these two visions reflected in the lyrics? If so, how?

There is a lot of references to all things lunar in the lyrics. As in Lightmare that says “The moon is my mother”; and the lunacy is in Bride of Satan, for example, which is about two brothers fighting to the death over a bride who is only truly in love with the Devil. This is analogous of course with layers of meaning. I will have a full lyric sheet out soon for fans to get the whole story more readily.

Bassist Jay Matheson is also an accomplished audio engineer. Was he involved in the production?

Jay did all of the sound engineering, recording and mastering in his world famous Jam Room Studio in Columbia, South Carolina. He is an old school audio wizard! His studio wall is lined with amazing punk and metal albums that he has recorded there including Kylesa, Baroness, Black Tusk, The Queers, Oi Polloi, Appalachian Terror Unit, Coffin Torture and many more.

Lunacy is darker, heavier than Space Coke’s past records. Why such a shift? Would you say there are other reasons why this album is different from the rest?

I wanted it to be darker and more occult. That’s where I always wanted to go with Space Coke. It’s hard to figure out how to mix Doom, Goth and Psychedlic. I am working my way towards the best way to present that in a recording and it’s a process.

You’ve said that each one of you added your own influences on the album, pushing it above and beyond the traditional sound of psychedelic/doom metal. What are some of such influences? And how would you say they helped craft Space Coke’s peculiar sound?

Jay really comes from an old school metal and punk vibe and I want to make things as weird as possible. He keeps me grounded and I make it stranger. We have done everything from punk to noise in our sound and I wouldn’t want to make a recording without his influence. I write with his approach in my mind and that makes me come up with a certain style of music that is definitively Space Coke.

2022 is approaching and you’ll be off to a great start with the album release in mid-January. What else can we expect from Space Coke next year?

I am already starting to work on a new album. Writing and recording Lunacy during the lockdown really inspired me to craft the sound more. I feel like we are ready to make the album that we have always been working up to this year.

Many thanks to Reno and all the members of Space Coke! Lunacy is out now and it can be found on Bandcamp, and you can get all the band updates on its Facebook page. And remember: if the amps don’t smoke, it ain’t Space Coke!