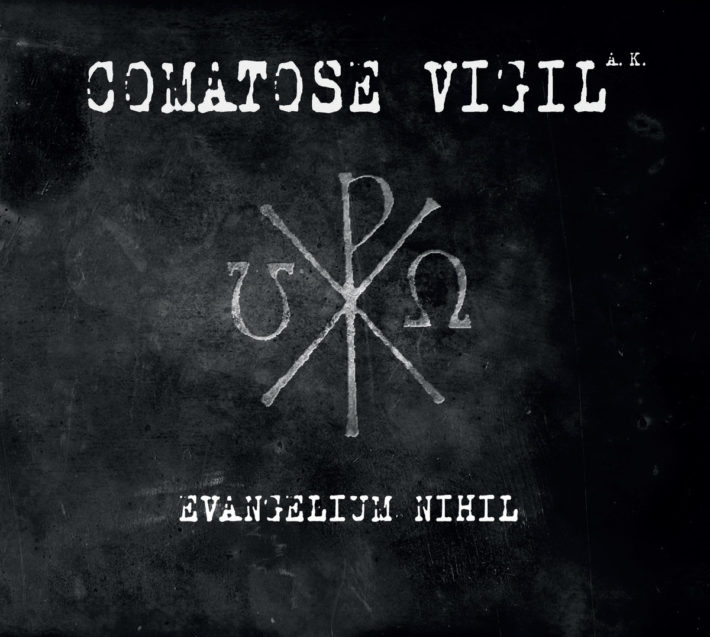 Funeral doom. A place no one goes to feel happy. A style of music capable of evoking emotions often best left alone. Because of all this, it makes us—the listeners—curious. What place will this music take us to? It is an incredibly hard style of music to get right, where the focus is more on emotion than technicality. Comatose Vigil A.K. (“A.K.” added to avoid legal issues) offer their latest in this niche genre, focusing more on horror than on grief.

I tend to judge an album based on its title track (if there is one). If the album is named after the track, surely there must be something exceptional about it. If I were to judge this particular album by its title track, I would be very disappointed. Funeral doom (at least how I interpret it) is supposed to have space that allows its listener to fully embrace the crushing feelings it conveys. Whether that’s unending melancholy or overwhelming terror, there is supposed to be some element of disgestion. The problem with “Evangelium Nihil” is in its use of strings. As the song progresses, every once in a while the strings will play that iconic line from the movie Psycho. What this does is suck me out of the moment of imagination and force the image of the movie in my head. That, and despite the slow tempo of the song, there seems to be too much going on. In the middle of the song, it suddenly delves into static sound effects that feel out of place. I understand what they were going for; instead of falling into the usual stereotype of deep sadness, they are trying to explore funeral doom through another avenue of horror. But any hope of this “static section” having any impact is lost by its sudden introduction.

If “Evangelium Nihil” was an example of what not to do, “Comatose Vigil” learned from those mistakes to create a masterpiece. It manages to maintain its horror-like atmosphere with its slow, trudging tempo and there is plenty of space for the listener to get lost in without too much going on. Each time I listen to it, I’m pulled into a black pit with terrors that manifest at the edge of my mind. The vocals add to the crushing weight, making this a dark and heavy song. While strings were one of the biggest drawbacks on the previous song, they do nothing but elevate “Comatose Vigil” to another level. Instead of trying to be at the forefront with a motive, they are used as a textural element, making the song bigger as a whole and not letting the guitars dissolve into monotony. Midway through the song, a choir sneaks into the mix and continues to build, ever so slowly, to an impending climax. It’s like watching a horror movie seeing the killer walk slowly toward his victim. You know he’s going to do it and with each step, the fear continues to build. This song achieves what the band was trying—and ultimately failed—to do with the first track. It conveys a sense of fear and horror with plenty of space for the listener to let it sink in.

“Deus Sterilis” continues in the same vein as its predecessor; heavy, slow, and terrifying. It fits well within the theme of the album established by “Comatose Vigil”, adding a nice continuity on to the next track.

“The Day Heaven Fell” is a unique track in the sense that it subtly changes emotion from the previous three tracks. Instead of eliminating the emotion of fear, this track is filled with dread and grief. It’s a small, almost imperceptible change, yet ends the album on a melancholic feel that is typically associated with this kind of music. From the opening, eerily plucked guitars to the ambient decay at the end, this 20 minute closer is a great way to end this long record.

At the end of the day, this album would have been great with only three tracks. After listening to how the last three flow together, and the atmosphere they create, the opener feels out of place. It’s hard to stick out in this genre without straying so far from what defines it. It’s also hard to compete with some of the landmark albums that have come out in the last couple of years from the likes of Bell Witch and Swallow The Sun. While this album might not hold up against those, it is still a good one to put on every once in a while.