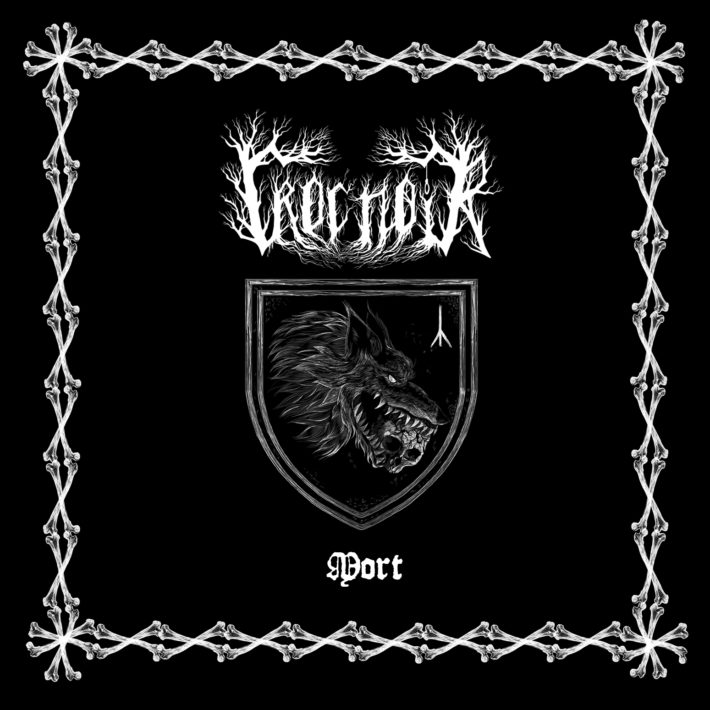 I admit I was confused at first by the band name. What do crocodiles have to do with raw, mid-tempo, sombre black metal from Alsace? Don’t get me wrong, crocodiles are pretty metal. One of the tightest death metal songs, Nile’s „Sacrifice Unto Sebek“ is about a man-eating crocodile god, with not only the instrumentals being brutal as hell but the lyrics perfectly contributing to the vision of carnage. Thankfully it was just my limited knowledge of french, and a quick dictionary skim revealed that croc actually means fang, which makes more sense within the context.

I guess the animal we’re dealing with here is the wolf (as evidenced by the album cover), the apex predator of the Alsatian woods, which was actually extirpated from the area a long time ago. Croc Noir’s music evokes the lingering spirit of the beast, a creeping death still wandering the landscape. But their style does not mimic the creature’s bloodthirsty nature. This isn’t furious, breakneck-paced black metal. The wandering wolf is the symbol of a primal darkness, imperishable, permeating the souls of world-weary men. It is a melancholic, solitary dirge.

As I mentioned, it’s mostly mid-tempo stuff with a hefty dose of DSBM stylings. Being Frenchmen, there’s an obvious huge influence from Peste Noire, especially their early records. The method is mostly drawn out, melancholic melodies, nothing too complex in the songwriting department. Yet they’re always compelling and provide that enchanting atmosphere of lonely forest walks. However, Croc Noir have a trick up their sleeve that elevates them from just being generic depressive black metal no. #789. It’s those damn accordions. The French influence rears itself again when every now and then an accordion breaks out with some utterly sublime melodies. As much as it can be an instrument of jolly, upbeat party music (trust me, I’m from the Balkans), Croc Noir dig deep into the darkest ponderings of your accordionist who then lets all his world-weariness speak through the instrument. A great complement to the downtrodden guitars riffs and melodies.

The accordion is present on most songs with a decent degree of variation in use. On showcase track “Des Feuilles Mortes” its melody takes the form of the chorus, while the black metal settles down and provides rhythmic backing. On “Tapis Dans l’Ombre” it’s used in tandem with some awesome tremolo riffs. And it’s always used in good measure, not as an omnipresent always-in-your face gimmick. When it’s black metal time, it’s black metal upfront and its stylings do their thing without supplementary instruments being shoehorned in for no good reason. When the accordionist puts on corpse paint he gets his moment, before respectfully stepping back and letting raw guitar crunch and blast beats finish breaking down your spirits.

Croc Noir has a good thing going on. A compact sound with a few neat extra things going on. They’re already a notch above the countless start-up black metal bands who haven’t managed to progress beyond emulating the classic sounds and techniques. However, they’ve still got some work to do, some improvements to make. And I say this especially because you can tell there’s plenty talent in this, at the end of the day mostly standard black metal record. If you’re not that into raw depressive black metal (and I am), Croc Noir might not strike you as especially interesting. Yes, they have the accordions and have elevated it’s used beyond gimmick status, but there’s definitely more to be done both with it and the black metal baseline. But this is their debut, and they’ve certainly convinced me that whatever they do next is worth anticipating. Not to say “Mort” isn’t a good record in its own right – it really is.