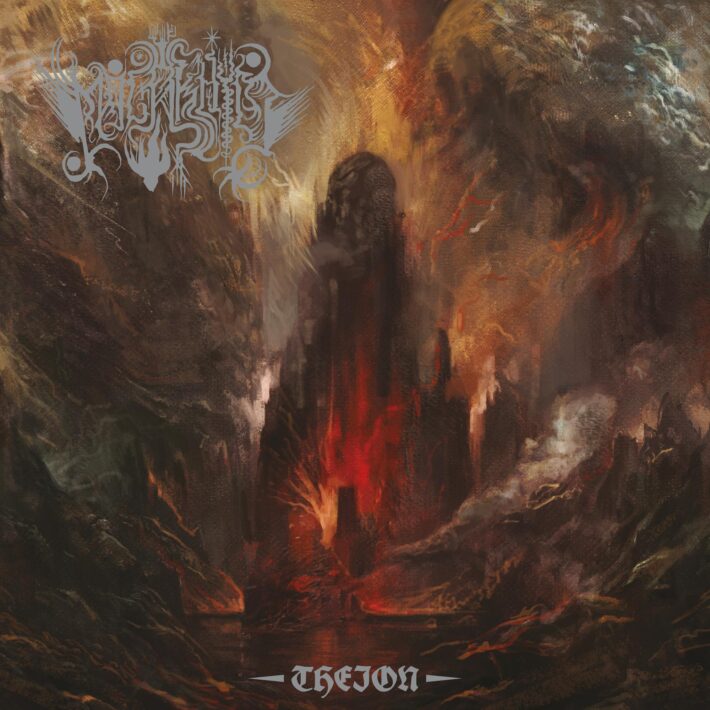 There’s a new year. This doesn’t mean anything by itself, everything that made last year what it was is still in place, and there is no magic deadline for the rise of political movements or diseases. However, there is a symbolic power to it. The turning over of a new leaf. This is my first review of the new year, and I hope to get off to a good start. Please don’t let me down, Malakhim.

Theion is the debut full-length release from Swedish black metallers Malakhim. Everyone calls them black metal, so I will smile and nod even though they sound a lot closer to blackened death metal to my ear. Not a big deal, but expect more Behemoth than Burzum, more Musmahhu than Mayhem when you enter this album. The band settles into a mostly mid-paced-for-black-metal tempo, and the buzz of the guitars will sound familiar to anyone with a familiarity with the label.

You’re forgiven if you give up on Theion after the first two tracks, as Malakhim do not start this album with optimism-inspiring tunes.They’re fine. But the first quarter of the album fails to differentiate itself from a thousand other black metal releases from the last few years. I forget the riffs as they happen, the songs  meander, and it feels as if nothing meaningful happens. It’s only two tracks, but this sets up the rest of the album to plunge into the obscurity of mediocre black metal.

From there, however, the album soars. Nothing changes significantly. The riffs still feel as if they are nothing more than acceptable, and the atmosphere sounds as if it will trip and land face first in a death metal release. But everything works together. Vocalist “E” leads Theion, as his bestial howls of joy carry the record. His voice fits the feel of the album perfectly. Theion has a harder shell to its sound than most black metal albums do, so even though Malakhim doesn’t break any new ground on their debut, it still feels like a fresh release.

Outside of the vocals, the production sounds slimey, but this works out to the record’s benefit. Given how the riffs and songwriting don’t hold this album up, it’s up to the atmosphere and individual performances to carry that burden. A murky residue falls over the album, making the tracks feel as if they exist in a dimension slightly adjacent to yours. This never wanders into the territory of raw black metal-indead, by Iron Bonehead Production standards, the production job may feel positively clear. However, the producers obviously put a lot of thought into how the album would present itself, and that thought paid off.

Theion is a boilerplate black metal album, for good and bad. Malakhim don’t try to break any molds or go any new places here, which leaves the record weak to decades of comparisons. Because the vocals are the main selling point of this record to my ears, the times when the band decides to change up their howling sound come off as bizarre and immersion-breaking. When the vocals collapse, nothing else rises to hold the music up. The drumming impresses, but isn’t enough to carry a record. Theion never feels less than competent, but there isn’t really a reason to listen to it beyond a change of pace.

Of course, that’s enough at times. Theion does not reinvent the wheel, but still has made a smooth, fast wheel. For a young band, this debut impresses me and leaves me excited for their future. The new year starts off on solid, familiar ground. Hopefully it continues that way, I’ll take all the new beginnings I can get.