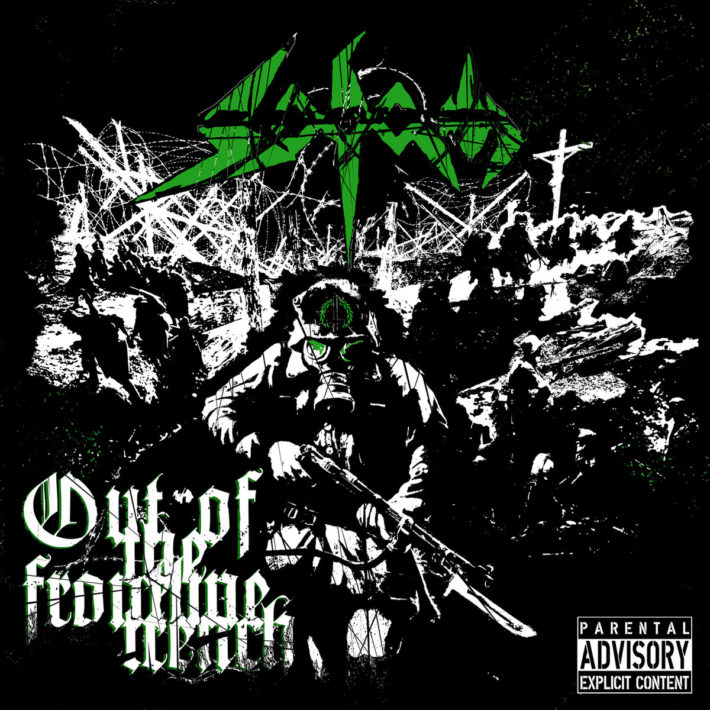 You probably already know Sodom. They have been active for almost four decades, and have released over thirty albums, live albums, demos, and EPs in that time. They are thrash metal royalty. They apparently have an album coming on the horizon, but have released the EP Out of the Frontline Trench in the meantime to rev up their fans. Sometimes, older bands can get complacent in their old age, and fall into patterns of comfort or blandness. Sodom looks to avoid that trap over thirty releases into their career.

If you don’t already know Sodom, they play your basic brand of old-school thrash. Raw aggression, fast riffs, and vocals that seem to splint the difference between punk and death metal dominate the EP. There are only three new tracks on Out of the Frontline Trench, the first of which will also be on their upcoming album. A re-recording of their most popular track “Agent Orange” and a live version of “Bombenhagel” finish the tracklist. Twin guitar attacks and drum patterns with plenty of room for fills the new tracks, which follow the dogma of pure thrash and would have sounded in place in the 1980s and 1990s.

Despite their age, Sodom are still able to hang on to their instruments, and there is plenty of fun to be had on Out of the Frontline Trench. The choruses are all catchy, the riffs are all interesting. The twin guitars are very well used, and add a real power to the sound that some bands can’t match. These guys have written simple enough music, but they are executing it with impressive levels of precision. Despite undergoing countless lineup changes, Sodom plays with confidence that fits a band of its age.

There are some problems here, and they mainly center around the re-recording of “Agent Orange.” First, this was obviously written by someone in a different place than the new tracks. “Agent Orange” has noticeably more aggression than its newer counterparts, and the guitar solo is noticeably better than the others. This wouldn’t be a problem except that it highlights problems with the rest of the material. “Out of the Frontline Trench” is aggressive, sure, but compared to “Agent Orange” it loses some of its shine.Sodom can still play at an extremely high level, but the inclusion of a re-recording and a live track just show that they have lost a step in the songwriting department. It is a small step, but it is large enough to create a nagging thought whenever listening to the first few tracks.

Second, there is no real point to this re-recording. It has somewhat better production than the original, but otherwise is similar enough to not really have a purpose. They could have just put the original song on here and the quality of the EP would have been about the same. I don’t want to dismiss the hard work that Sodom put into recording the track, but there doesn’t seem to be a benefit to said hard work.

Alright, maybe it’s just an EP. They grabbed some material for their hardcore fans to pour over without bothering a broader audience, and I’m being nitpicky. Fine. I’m sure that someone somewhere will absolutely love that they get to hear a slightly different version of their favorite song, and the fact that it’s not aimed directly at me does not mean it’s bad. So let’s just stick to the newer material for now.

Unfortunately, there are still some small issues with just the newer tracks. Some of the drum fills get repetitive, and the guitar solos sound stale and phoned-in. These are even more nitpicky than my previous complaints, but they are somewhat substantial issues when there are only three tracks. When the only three new tracks on your EP sound somewhat interchangeable, it is a problem. The drum fills and guitar solos are the cause of this. They aren’t poorly played, but they don’t change at all throughout the tracks. This forms an unintentional sense of continuity that creates more of a sense of sameness than the songs can support.

Ultimately, this is still Sodom. Even if they have understandably lost a step over the past four decades, they are still great musicians, and no amount of minor gripes will change that. Out of the Frontline Trench is an enjoyable release that will definitely please longtime fans and hold them over until a new album drops. If you’re a newer fan looking to check out this band, Out of the Frontline Trench will tell you what you need to know.