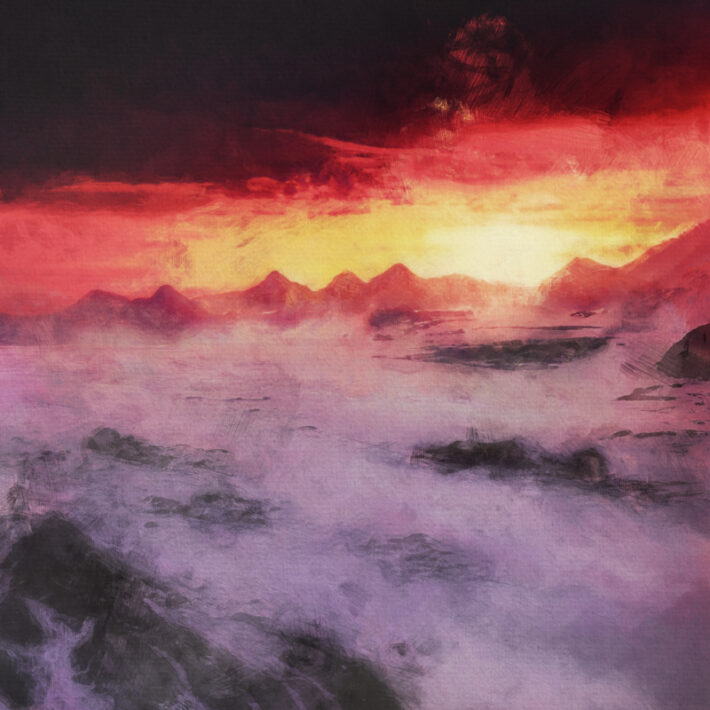 Black metal projects consisting of just a single member are nothing new. Since the early days of Norwegian black metal, outcasts have rejected any notion of sociability and sought to create evil music all by themselves. One-man projects are very interesting because the music has been created entirely by a single mind, often leading to long and dense albums filled with ideas. One such mind is Ayloss, a Greek black metal musician who has been pumping out music on his own for almost twenty years. He is most notable for his weird ambient/black metal project Spectral Lore, which he started in 2005, and under which name he has released five full-lengths. Auriferous Flame sees Ayloss taking an approach to black metal unlike what we’ve heard before from his other projects.

The Great Mist Within is much more atmospheric than what Ayloss has done in the past. One of his more recent projects, Mystras, incorporated medieval thematics and folk passages into a washed-out style of atmospheric black metal that is somewhat similar to Auriferous Flame. Ayloss himself said that, “Αuriferous Flame is in a way a continuation of many of the ideas and music styles in Mystras, without the obligation of the medieval historical theme and folk music pieces.” In my opinion however, Auriferous Flame transcends Mystras in terms of quality atmospheric black metal.

Opening track “Voice of the Gleaming Edge” and title track “The Great Mist Within” are aggressive and driving cuts with great guitar leads throughout each track. The repetition of the leads actually works very well to create a deeper atmosphere, and the drum gallops give a feeling of progression and energy to each song, preventing any sort of boredom. “Molten Gold” is more mid-paced traditional black metal with a minor chord groove executed very well. The repetition of the dissonant lead builds tension throughout the track, while intermittent counter-melodies cut in and out.

“Ancient Corridors”, clocking in at 10 minutes 45 seconds, is the longest track on The Great Mist Within, and unfortunately it doesn’t quite manage to justify its length. The track is slow and haunting, with a quality atmosphere created by its clean guitar melodies. Unfortunately, the placement of this song following the up-tempo title track causes it to feel extra drawn-out. I think “Ancient Corridors” would have benefitted by being about half as long. It would have also helped if we got another up-tempo track at the end rather than (or in addition to) the meditative clean outro “Mass of Ice”, as in its current state it really feels like this record crawls to the finish line.

Auriferous Flame’s debut is a flawed but solid record coming from a veteran black metal mind. This record feels like an additional outlet for Ayloss to express some of the atmospheric ideas and melancholic feelings that his other projects don’t seem to cover. On The Great Mist Within I’m not hearing the same left-field eccentricity or inspired creativity that we hear on Spectral Lore records, but also there’s something to be said for relative simplicity. I’m hoping Auriferous Flame isn’t a one-and-done project for Ayloss, because I could see him taking these ideas further than he did here and really blowing me away in the future.