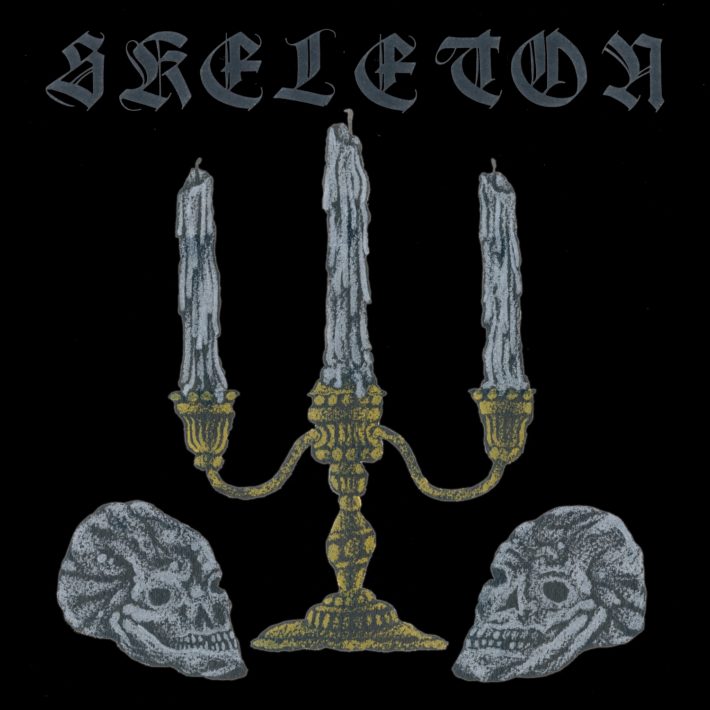 Far under busy city streets, in a place where the souls of the dead dwell, bones lie in musty heaps and gossamer webs cling to ribcages. Worms feast beneath funeral shrouds and the doomsday grins of the deceased leer out from behind cracked skulls. Candles flicker dimly in the darkness, hot wax dripping slowly. Beyond the light, in the unwavering pall of the tomb, a macabre figure rises. The clinking of bone upon bone can be heard as the figure makes its way out of the shadows. For behold – it is the SKELETON, and he brings with him the smoldering fires of darkness and the crushing weight of despair.

This is the imagery that comes to mind on the debut self-titled album from the blackened punk band Skeleton. Hailing from Austin, Texas, the metal quartet primarily plays a mix of black metal and punk rock, but there are also elements of thrash and crust present. Now, I will be the first to admit that blackened punk is usually not my wheelhouse. However, listening to Skeleton has opened a new appreciation for this amalgamation of styles.  It’s raw, violent, and will permanently disable your pacemaker. This is primarily due to the guitar shredding by David Skeleton and Alex Guzman. The primal beats laid down by percussionist and vocalist Victor Skeleton, accompanied by the magic of bassist Cody Combs, helps seal the band’s apocalyptic sound. Victor also does a tremendous job with the vocals, shrieking his heart out on the LP with an admirable black metal gurgle. The production quality on the album is raw enough to give it the proper vibe and avoids the lo-fi struggle of being recorded in someone’s basement.

The self-titled album begins with the riotous track “Skeleton.” It’s pedal-to-the-medal with this ferocious opener. The churning guitars build up a wall of noise that helps to set the atmosphere of the album. Then it’s on to “Mark of Death,” a punk smasher that will get you headbanging in no time. Skeleton backs off for a moment as the oddly calming intro of “The Sword” washes over the listener.  However, this reprieve is short-lived as the song launches into a diatribe of swirling guitars and drums. The main riff of “The Sword” is as infectious as the bubonic plague, lodging into your mind like the axe in The Shining.

“Toad” demonstrates that Skeleton are masters of their craft. Even though the track is under 2 minutes, the band effortlessly switches back and forth between punk and black metal. “Ring Of Fire” continues in this vein. I’m fond of the main riff of this track, and the ritardando at the end of the song is the pièce de résistance. The first part of “At War” features the band’s melodic side with elegant, sweeping riffs. But then the band jumps off a cliff into the furious second half of the song. It’s punky and catchy as hell.

“Taste Of Blood…” Either you took one to the jaw during the last song or the skeleton from the catacombs has developed a taste for human flesh. The ending of this song is particularly jarring. Track 8 – “Victory” – is one that had me scratching my head just a bit. At first listen it seemed like filler, as it’s a short instrumental track that doesn’t stand well on its own. However, it makes more sense if you look at it as both a respite and a link between tracks 7 and 9. “Turned To Stone” features phenomenal drumming and is a bit more chaotic than other songs on the album. Parts of it almost sound like something The Chariot would write.

Always save the best for last. Skeleton masters this principle with their closing song, “Catacombs.” It’s melodic, violent, driving, rhythmic, atmospheric, and raw. “Catacombs” is the undisputed masterpiece of Skeleton’s debut album, hands down. The denouement after the main theme is orgasmic. I really can’t convey how much I enjoyed this song, so you’ll just have to listen for yourself!

Skeleton’s debut album is a vile, raw masterpiece of blackened punk. I am impressed by the band’s consistency and musical prowess. Skeleton combines melody, heaviness, atmosphere, and creativity to engage the listener. Fans of Iskra, Bone Awl, Fasad, and Venom will enjoy Skeleton, but devotees of black metal and punk in general should also give Skeleton a spin. Get ready. The sounds of the SKELETON – of a grimy, rat-infested, bone-clanking brute – are coming soon to a city near you!