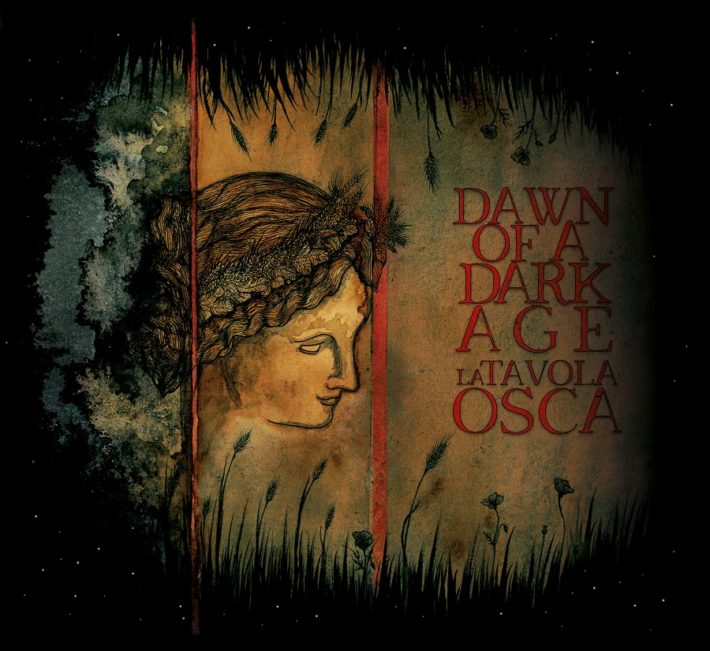 Mixing two distant concepts can get you some weird results. Haphazard mixtures are how you get the best ice cream flavors, and how you get the worst ones as well. They’re how you get the most innovative and forward pushing bands on the absolute cutting edge of what the listener can even imagine, and they’re how you get the bands that feel like a bad evolutionary mutation that was born in pain and will die quickly. Dawn Of A Dark Age somehow manages to fit in all of these categories at once.

It’s hard to get more uncompromising that Dawn Of A Dark Age. There is almost no thought given to what the listener will think. Does it sound like the clarinet and black metal rasping fit together about as well as sriracha and quail eggs on chocolate ice cream to you? Too bad, it’s what you’re getting. This level of uncompromising artistic vision is rarely seen, and there’s a reason for that.

The transitions on La Tavola Osca are extremely smooth. Given the vast sonic disparities in this album’s sounds and influences, you would be forgiven for assuming that there are jagged edges throughout the music. However, everything flows together for the most part. This speaks to the songwriting prowess of composer Vittorio Sabelli. Being able to blend these disparate noises and make them sound like natural friends is an impressive feat, and one that Sabelli has spent years refining.

Sabelli is a clarinet player who values expression over technique. That’s not to say that his technique is bad, in fact it’s rather excellent when needed, but rather that it doesn’t get in the way. The biggest issue with his playing is that however he recorded the instrument sounds out of place with everything else for large swaths of the album, almost as if the rest of La Tavola Osca was put together in a studio and then the clarinet parts were recorded on a cell phone and pasted on top. Otherwise, for something so out of the norm, the weirdest part of the album sounds fairly well integrated and driven.

Unfortunately, the album as a whole just doesn’t hang together. Large swaths of the thing are too repetitive, and once you get over the weirdness there isn’t enough meat on the bone. Repetition in music is a dangerous tool, and the masters of composition have used it to increase tension for centuries, or to provide a specific atmosphere that their sound explores. But the trick is that repetition is still doing something in those contexts. Not really the case here. Listening to La Tavola Osca feels like ordering twenty chicken nuggets at your fast food establishment of choice, only to get exactly three bites of gourmet chicken instead.

The bigger problem is that the music stretches on forever, and doesn’t hit enough payoffs. Every moment feels like it’s building towards a bigger moment, but then that bigger moment never arrives. Part of this is my expectations, caused by the use of motifs in this album that typically signal a progression but are just part of the texture here, but part of this is a lack of actual growth in the music. It might seem bizarre to write that about an album that ranges from quiet clarinet duets to black metal, but it’s how it feels. There is no destination in mind for the music, and the musical wanderings don’t always have a purpose. On previous albums, Dawn Of A Dark Age was able to get away with this as individual songs were relatively contained, and if one was a miss the next one could capture the intention. Here, though, there is really only one pitch thrown, and it missed the strike zone.

Although La Tavola Osca is a miss for me, it is an admirable implementation of an unflinching artistic vision, it is a vision that I don’t see eye to eye with. Still, if you’re looking for unique music that you haven’t heard the likes of before, it will be difficult to find something better fitting than Dawn Of A Dark Age. Maybe check out their back catalog though. I didn’t really enjoy listening to La Tavola Osca, but I can’t stop being fascinated and impressed by it either.

Click here to visit Dawn Of A Dark Age’s Bandcamp