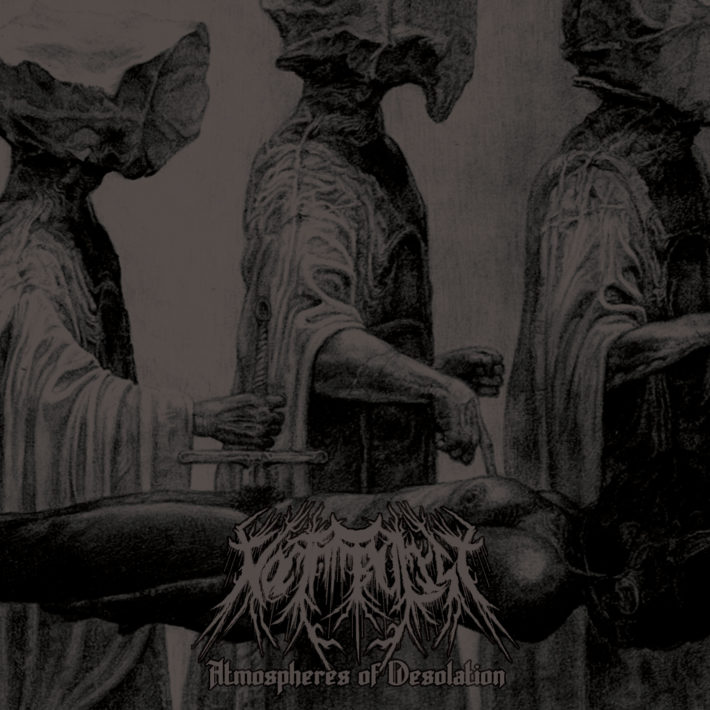 Even though Noctambulist has been founded back in 2016, the only thing to be found on their Bandcamp was The Soil Tears Ligament From Bone To Cleanse The Earth, one track from early 2017. Now, about two years later, they release Atmospheres of Desolation, a full-length dense, heavy and dissonant death metal album that was definitely worth the wait. When putting on the record it’s like a brick wall coming right at you, hitting you in the face, leaving little room to breathe. This makes for an intense experience with an album so dense you could listen to it ten times and still discover new riffs and melodies. With its more atmospheric interludes it gives you just enough time to catch your breath before coming back with even more intensity than before.

The fact that Noctambulist’s band members are really skilled at both playing their instruments as well as composing the music becomes clear in Abnegation, the first full song of the album. After Dimming Lights Illuminate, an introduction full of dissonant guitar riffs that almost sound like static, Abnegation follows up with extremely fast and very quickly changing riffs. There’s high-pitched shredding as well as more rhythm-based riffs, proving the guitarist can turn his hand to anything. The grunts are really well done too, there’s a lot of power behind them, contributing a lot to the aggressiveness of the record. However, the vocalist can’t just do deep grunts, but he can also produce agonizing screams, which can be heard on tracks like Denial of Autonomy. The drums have to be mentioned too, they’re so damn fast, it’s got to be a full body workout to play them. There’s a balance between the supporting role of the drums and its additions to the music (like fills, for example), making sure they aren’t too distracting, while still contributing something extra to the music.

Apart from the intense aggressiveness of the record, there’s also more atmospheric parts, creating quick breathers between the explosions that make up the majority of the record. In Atmospheres of Desolation, the album’s third track, the pure aggression gets alternated by a more rhythmic part that flows into an atmospheric section. In this part, the the guitars play suspenseful melodies, accompanied by the drums. After a while, though, the music builds up to an even more intense comeback than the beginning of the song. Another atmospheric section appears in Jubilant Cataclysm. In general, the bass guitar doesn’t stand out too much, but instead blends in well with the rest of the music. However, in this song it lays the foundation of the ‘interlude’. It repeats the main guitar riff on top of which the rest of the band can build in order to get the song back to its original intensity. What these examples, as well as the other interludes, have in common is the structure: first the music gets a lot more quiet, creating a haunting atmosphere, after which the tension gets built up to eventually explode into more aggressive music.

In conclusion, Atmospheres of Desolation is an intense technical death metal record that shows the band members’ intense skill in both playing their instrument as well as composing the music. The fast, haunting riffs get alternated by more (relatively) quiet interludes, only to build up again towards even more intense music. Even though the album’s duration is just under half an hour, it’s like they’ve compressed over an hour of music onto the record, you keep discovering new riffs and rhythms every time you give it a listen. It’s definitely an explosive start of the year, and a real recommendation for anyone who likes to be blown away by their music!