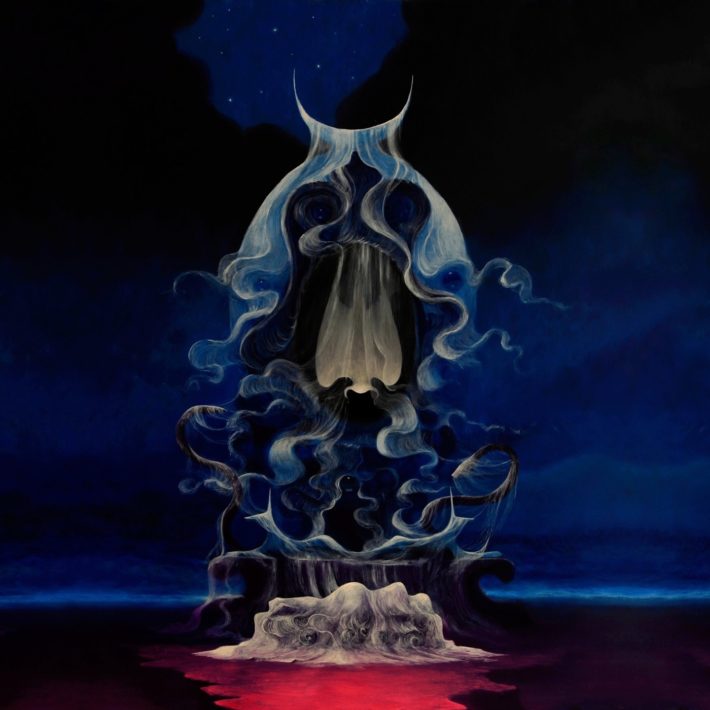 Ars Magna Umbrae first appeared on the black metal scene with its 2017 EP „Through Lunar Gateways“, silently appearing on Bandcamp without any pomp as one-man black metal projects usually do. In its first seconds it breaks expectations one has of such releases – instead of disjointedly produced, raw but often promising black metal, Ars Magna Umbrae showcased polished, grandiose sounds, an obviously experienced approach to atmosphere. In other words, this did not at all seem a youngling’s first attempt at bedroom black metal. The author hides behind the obscure pseudonym “K.M.”, but I’d wager this certainly isn’t his first serious foray into music, nor black metal. The 20 minute EP, while being rough around the edges, showed great promise and I was looking forward to Ars Magna Umbrae’s next outing.

A year later we got the first full length, “Lunar Ascension”. Originally self-released on Bandcamp, it is now being re-released by “I, Voidhanger Records” as a physical release and including one extra song as a closer. It continues right where the EP left off, starting with a colossal, suffocatingly dense, loud tone, perfectly fitting the thematic preoccupation with celestial bodies and surrounding dark forces of the cosmic void. It blasts with intricate riffage protruding from the deafening production, punctuating with higher tones, before slowing down and pondering the cosmos with calmer, but no less forceful atmospheric bits. The overall sound is superb and perfectly encapsulates the vision of an unspeakably colossal universe that many “cosmic” black metal bands strive for.

While this leaves a good impression on the first listen, on the second and third a suspicion crept into me. The musical concept sounds great on paper, but in practice it seems to start falling apart. I could speak in the abstract how well the songs are conceived, but in the act of listening I noticed how they don’t really grab me. Sure, I thought, I seldom have time to give my full attention to the music. As many people nowadays, even music enthusiasts, owing to general life commitments I can’t often fully invest myself into just listening to the music, sitting down and shutting out all concerns except the sounds coming out my speakers. It might just be a demanding record, certainly not the first in the genre. Maybe I should try active listening instead through shitty earbuds on my commute.

I try to do this with every album I review, even though some great ones click instantly without demanding full attention. But in this case, even though there was nothing except me, the couch and the record, my thoughts still seemed to wander. “Lunar Ascension” failed to engross me, despite everything about it indicating that it would at some point. I thought about it for a while, thinking what the cause might be. Despite all the promise the music shows, I think there is still a lot to improve in the songwriting department. For a start, most songs fail to differentiate themselves from the others. The methods in all of them is the same – dense riffage intersped with slower but mostly uninspired sections. The wall-of-sound tone that would certainly be a selling point for the records often betrays its plans. The riffage is certainly interesting, but it just can’t land any “oomph”, can’t establish its own groove while being obscured by the loud production. The drums, which are by the way quite nicely produced and carry a strong, deep pulse above the guitar sounds, are unfortunately not that varied in the fast sections (but carry some well-placed fills in the slower ones). This ends up with a sort of rhythmic monotony most of the time, and coupled with what I previously mentioned, enshrines a feeling that not really much is going on in the songs. Sure, atmospheric black metal commonly thrives on repetitive but compelling textures, but Ars Magna Umbrae tries to go beyond that yet never fully realises. Compare for instance with Deathspell Omega, an obvious influence on the guitars style here – their dissonant guitar antics are complemented by equally demented, chaotic drums, which are in Ars Magna Umbrae’s case mostly just straight blasts or simple grooves.

But I certainly wouldn’t call this a bad record. It just does so much things right at the end of the day. A couple moments and tracks are simply brilliant – the final section of “Daughter of Endless Light” or the whole of “The Wanderer”. If you’re into dense, cosmic black metal it’s certainly worth at least one listen. I’m sure there’s listeners out there who will appreciate the record more than I did, if nothing because they have a slightly larger attention span than me. Also, this record hasn’t turned me off the project completely – I await to see what K.M. comes up with next. I can imagine the next record being a lot better, winning me over without much effort.

Tracklist:
1. Through Thorns And Bones
2. Daughter Of Endless Light
3. Dying Sun Divination
4. Lunar Ascension
5. The Wanderer
6. Fallen Star’s Light
7. A Whisper From The Void (Interlude)
8. Chtonic Torches Of Gnosis
9. The Feast Of Shades