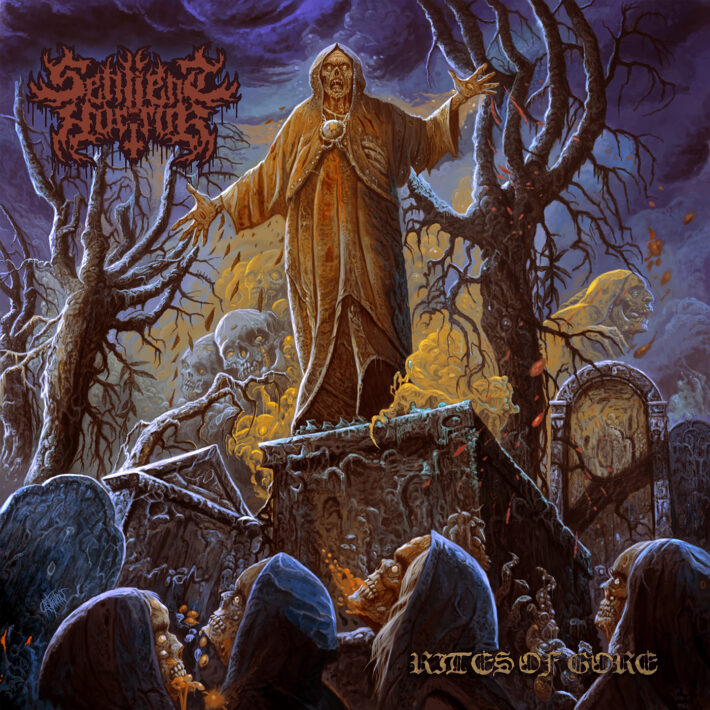 But wait, it’s actually not that simple. Well- maybe it is, but I still wanna talk about this record. The subsection of the old-school death metal scene dedicated to pure Swedish worship has somewhat slowed down recently. It was on fire a few years ago, but for as much as I love the style, nothing has really floored me since Gatecreeper’s Deserted in 2019. I certainly didn’t expect Sentient Horror, a funny little band from Stockholm, New Jersey (yes, seriously) to be the band that blows my mind. Boy was I in for a surprise.

The quality of old-school death metal, being such a firmly established style as is, relies heavily on variation and the overall quality of a band’s writing. For what Sentient Horror lack in originality, they more than make up for in every other respect. This style is of course nothing new, but Rites of Gore is so well-crafted and compelling you’d think you were hearing Left Hand Path again for the first time.

These New Jersey boys take the established Swe-death style and make it their own. They play a kind of “Americanized” Swedish death metal style, by which I mean their music has the polish of American death metal with all the swagger of Swedish death. Their guitar tone isn’t pure messy HM2 either, it’s got a tighter sound than that of the OG Swedish stuff, but the impact is still there. Think Gatecreeper with the hardcore influence toned down. Sentient Horror are pure death metal of the highest order.

Each and every song on Rites of Gore is an absolute riot. “A Faceless Corpse” and “Obliteration of Souls” make for a monumental one-two punch opener, and the driving punky “Swamp Burial” keeps you moving in preparation for the pummeling of the title track and subsequent bangers “Splitting Skulls” and “Descend to Chaos”, the three serving as a central block for the album. The driving “The Grave is My Home” brings in “Till Death Do Us Rot” and the epic “The Eyes of Dread”, two fantastic tracks that conclude the journey on a climax. The latter features addicting triplet riffs that add a unique touch to what was already a great album. The CD version of the album also ends with a cover of Entombed’s “Supposed to Rot”, which not only fits the theme of this album perfectly but is also an outstanding cover of the iconic track. With the cover included, the whole package doesn’t even break 45 minutes, and I was breaking my neck the whole time.

There are no mediocre songs on this album. No filler, all killer. Nearly every track stands out on its own, and even the less memorable songs have a killer riff or two to make you question why it’s not in your playlist already. Performances are top-tier all around, guitar work and writing are exceptional. Vocal performance works perfectly, I could listen to his voice all day. The drumming fits naturally, with a punky influence where it suits the song. The only thing lacking is some bass-forward parts, but the guitar work is so addicting you barely notice.

This was a last-minute grab from the promo pile for me, and I couldn’t be more taken aback by Rites of Gore. The word that kept coming up in my notes was “outstanding”, because this record is outstanding. Redefining Darkness have a real gem in Sentient Horror, with their killer music and killer merch to boot. This album honors the legacy of the classic bands that pioneered the style, and these boys deserve all the praise I can give them. This will certainly be in contention for my favorite death metal release of the year. Over the course of this old-school death metal revival, I can seldom say the style has been better executed than here on Sentient Horror’s Rites of Gore.