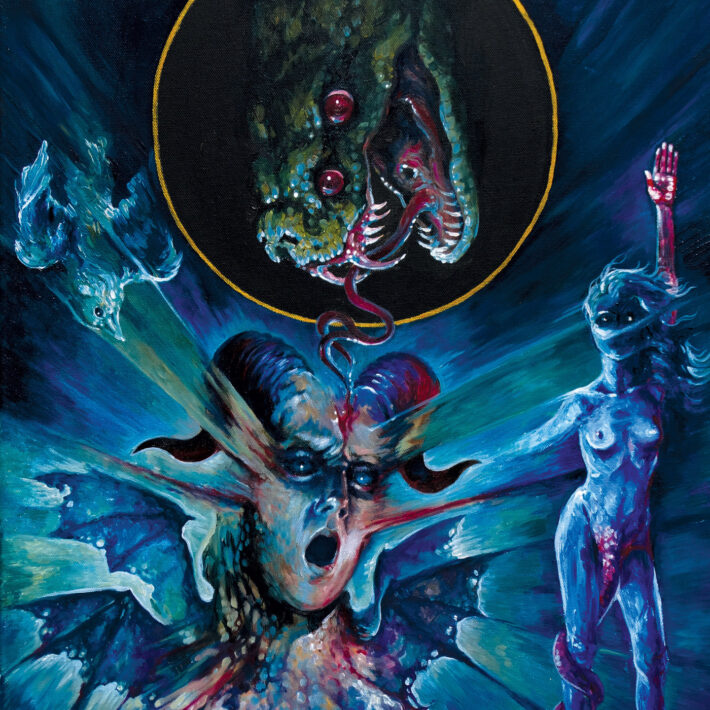 There are few one man projects that release albums as fequently as Esoctrilihum, while maintaining the high quality of his discography. In merely four years, Asthâghul (the mastermind behind the project) has already created five full-lengths and an EP. This Friday, he releases his next offering: another full-length with almost 80 minutes of intimidating, intriguing, symphonic black metal.

The record, called Dy’th Requiem for the Serpent Telepath, fits perfectly in his discography. Though it’s mainly black metal, there’s also clear influences from death and doom metal, and the symphonic elements also play an important role. The album’s twelve tracks are divided into four sections, telling the story of the death, transfiguration, and rebirth of the “Serpent Telepath”, which is reportedly an astral projection of Asthâghul himself. The cryptic language and intimidating album cover only add to the mystic atmosphere of the record, perfectly representing its musical content.

The album starts off with Esoctrilihum’s recognizable sound: dissonant and raw. Though obviously inspired by the classic black metal sound, the mix is full of dynamics, making the music sound richer than its Norwegian ancestors. The vocals, ranging from whispers to grunts, are expressive. Even though you can’t really understand what he’s saying, Asthâghul still succeeds in conveying the haunting distress of the Serpent Telepath’s death. On songs like Salhn, you can hear how Esoctrilihum makes use of strings in order to create tension. The doomish riffs on guitar and drums lay the foundation for a slightly off-key violin, its dissonance prying into your mind. When the grunts begin, there’s even a second violin playing a countermelody that creates even more dissonance.

Between each track, as well as within, there’s various changes in musical theme and instrumentation. Even so, the album still works as a whole. The album is like a trip through various levels of discomfort, while keeping you so engaged that you keep wanting more. An example of this is Agakuh, from the second part of the record. It starts off with a lone guitar riff, which quickly gets accompanied by the rest of the instruments, creating a compelling vibe. Asthâghul’s distressful vocals and the penetrating strings evoke an uncomfortable feeling. After a few minutes of new layers being added and removed, there’s another simplistic tremolo riff that functions as a kind of bridge towards a new theme. The new sound, brighter than the first part of the song, goes through a series of transformations, taking you along through an aural trip.

The third part starts off with a higher energy than the previous tracks. Dy’th, one of the singles that was already released, seems to be one of the more straightforward ones though it doesn’t lack in power. Where Dy’th might have been relatively low on experimental elements, Craânag definitely makes up for that. It’s totally symphonic: Asthâghul creates an oppressing vibe with strings, timpanos, and a piano. At one point, there’s even a touch of rejoice, though overall, the atmosphere is still ominous. It’s definitely one of the more atmospheric tracks on the record. After the final part, which is as impressive as the other three, you’re left to contemplate what you’ve just experienced. And though it might be a bit overwhelming at first, you’ll come back to the record in no time.

In short, Dy’th Requiem for the Serpent Telepath is yet another impressively haunting, aural trip, created by the mastermind behind Esoctrilihum. It’s dissonant and raw, although the mix is really dynamic. Not a minute passes before a new instrument or musical theme is introduced, making sure that new elements can be discovered each time you put on the record. Composed and recorded with great skill, this album is one that fans of dissonant black metal can’t skip.

Part I: Serpentine Lamentations of Death