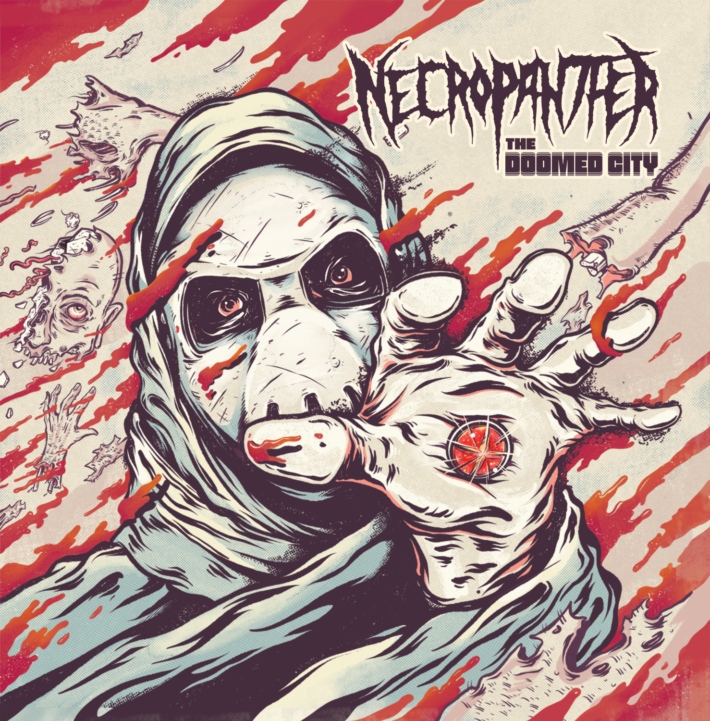 In 2018, Necropanther came out with the album Eyes of Blue Light. Their second release, Eyes of Blue Light was fantastic. The riffs were memorable, the musicianship and songwriting were impressive, and the entire album sounded fun and relaxed while still maintaining an adequate level of aggression. Now, Necropanther is releasing their third album, The Doomed City. This is supposedly a concept album based on the dystopian story of Logan’s Run. Given that the band is coming out with an album relatively quickly after a rousing success, and that they are trying something more ambitious than their past works, and that very few bands are able to consistently put out only amazing albums, obviously the best response to the news of The Doomed City was to get more and more excited as time goes on before even listening to the album, building my expectations higher and higher until there is no possible way that any album ever could meet them. And so that’s exactly what I did.

Necropanther plays a brand of melodic death metal that has a heavy thrash sound underlining it. Although The Doomed City is a concept album, it definitely is not progressive. The music is entirely what you see on the tin: Short, deliberate melodeath. However, there is some small variety here. Some jazz influence sneaks onto the album in places, which is a nice addition to the typical Necropanther sound.

One of the minor issues with Necropanther’s last release was the transitions between phases. Occasionally the transition from one section of a song to another would be awkward, as if the band wasn’t quite sure how to get from point a to point b and solved the problem by just mashing them together and hoping that nobody noticed. That problem is gone now. The seams between song sections are still there, however, the seams contribute to the music and make the overall picture more lovely.

The members of Necropanther are all excellent musicians and all are showcased quite well in The Doomed City. Particularly impressive was the drummer. In the past, double base kicks dominated Eyes of Blue Light and formed the backbone of the sound. That has changed. The drum beats seem far more varied on The Doomed City, and that variety is very welcome.

Paul Anop, vocalist/guitarist of the band, claims that “we are really reaching our stride in our songwriting and recording process,” and it shows. This is a very confident and comfortable album. Necropanther, despite playing thrash tinged melodeath, are not afraid to have moments of space and silence in there music. There is no real sense of urgency on The Doomed City, instead the music moves at its own pace and moves forward only where it wants to. The songs on The Doomed City feel very polished and smoothed out, even compared to previous Necropanther releases.

The downside to smoothing things out is that they lose their edge. Comfort and death metal don’t always mix well, and sometimes that comfort isn’t quite earned. When it works, relaxes death metal can be an incredible trick, but having so many songs that fit that bill in a row is a problem. There is a repetitive nature to this music that might be more forgivable with more aggression, but as it is the album slightly sags in the middle. This is more egregious than it could have been because despite being a concept album, there isn’t really a musical climax here. The songs aren’t building towards anything, they exist for their own purpose only. This album structure isn’t necessarily bad, but on The Doomed City it exaggerates the other existing problems. The lack of progression from song to song is like adding butter to a sandwich. Amplifying existing taste is fine, unless the sandwich that you’re adding the butter to consists of cigarette butts and human bone marrow. It’s not that bad here of course, but the concept is the same.

So, The Doomed City didn’t quite meet my high expectations, and isn’t up to par with Necropanther’s previous releases. It is still a very good album, though. The musicianship is impressive, as it always is on this band’s releases, and despite the sag in the middle, this is a very enjoyable release from a band that is becoming an increasingly interesting presence in the melodeath genre. Unlike in Logan’s Run, the future is bright for Necropanther.