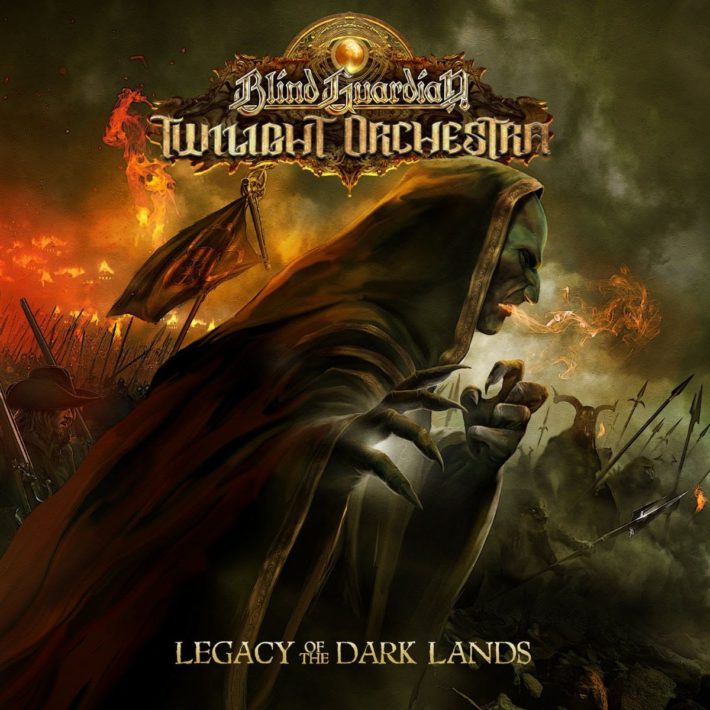 It’s been 23 years since we first heard of this project; and now that we can finally hold it in our hands, writing an appropriate review is not an easy task. Not only because of the weight of our expectations, but because of the colossal nature of this work as well.

Legacy of the Dark Lands presents itself as a work with many different layers since the beginning.

First of all, this isn’t “just” your typical concept-album; it’s the sequel to the German fantasy book (now also available in English) The Dark Lands, written by Markus Heitz, who collaborated on the album lyrics alongside Hansi Kürsch. It is embedded in its own narrative universe, which transcends the album and involves another media. This gives the album a distinct narrative aspect, but it doesn’t prevent us, the general public, to appreciate this work without any “preparation”.

It’s not your typical power and/or symphonic metal album either, even for Blind Guardian’s standard. It can’t be compared to anything else, because this album is completely, irreversibly, symphonic; or better, orchestral. No drums, no guitars, no bass nor keyboards. Accompanying Hansi’s voice there is an entire orchestra, so we could even ask ourselves why, on a metal website, we’re reviewing an album that isn’t metal, not even symphonic metal, by any means. In fact, the album is accredited to Blind Guardian Twilight Orchestra, not Blind Guardian¸ and only Hansi Kürsch and André Olbrich (Blind Guardian’s guitarist, songwriter here) have taken part in this project. The truth is, and it becomes more and more clear listening to the album, that this is a Blind Guardian album; an odd one, sure, but it still is. The roots, the fatherhood of the German quartet are obvious.

Now let’s talk about the real protagonist here – the music.

Despite the seemingly long tracklist, out of 24 tracks only 11 are “real” songs, plus an overture, while the others are spoken interludes that carry on the narrative between the songs’ lyrics. The songs, on their part, are pretty much connected to each other, via musical cross-references and, as said above, the story.
The way the album is built makes it difficult to analyse each song separately, because the impression is of one long song, interrupted by interludes here and there; it is best to simply point out where the music reaches its peaks, and this orchestral experiment is most successful.
The strongest section of the album is the central one, followed by the first part. The two singles, This Storm and Point of No Return, are both solid pieces that feature enthralling choruses, while Dark Cloud Rising and War Feeds War have a calmer pace while remaining extremely interesting.It’s worth to mention In the Red Dwarf’s Tower as it is a more narrative song yet a very interesting one and extremely captivating in its atmospheres, especially towards the last minutes. Treason and Harvester of Souls are the two songs which best convey the heroic force and the impetuosity of Blind Guardian’s music, with the latter being, in a personal opinion, the best song off the whole album.

The last songs are somewhat weaker, but this may be due to the very nature of the album, which can become tiresome to the ear; and here the interludes play a part too, because despite the impression of one great song, as said above, having so many interruptions might result in a fragmented appearance. On the other hand, we could say that interludes are needed, because otherwise it would have been exhausting to hear orchestral music non-stop for at least an hour, since it is an album which requires its fair share of attention.

However, the presence of said interludes is never overwhelmingly bothersome, and Legacy of the Dark Lands remains a wonderful album to listen to, capable of delivering strong emotions and moving the listener’s soul just like the previous Blind Guardian works had accustomed us to.

The first time we hear this album, we might not be entirely convinced. The first questions that can arise are whether this album will be actually listened again to in a more casual way, whether its songs will be sung and whistled, or listened to singularly. But Legacy needs its time, and needs to be heard at least a couple of times, not only to comprehend it, at least partially, but also to get used to its peculiar aspects; and the more we hear it, the more we are fully convinced that a more casual approach is absolutely possible, and also that it’s full of songs and “riffs” awaiting to be obsessively listened to again.

So yeah, it’s still a Blind Guardian album. The choruses and arrangements are still there, and even the riffs, remains, only this time it’s an orchestra performing them.
Hansi’s voice, and fantasy themes, are not the sole elements which anchor Legacy of the Dark Lands to its “half-brothers”; it’s the whole musical structure, that reveals itself as we lend our ear more and more.
We are able to sing Harvester of Souls the same way we can sing The Prophecy, with the same impetus, like a battle cry, andwe can hum In the Red Dwarf’s Tower just like we hum Curse my Name, losing ourselves to the rhythm; it’s just a matter of getting used to it, but we are soon left wondering how will this album sound if, and when, it will be played live.

Legacy of the Dark Lands might be regarded as the “final experiment”: after years of bands mixing symphonic elements into their music, one band takes the next step, releasing an album that – if you still haven’t got it – is entirely orchestral.
But, one could argue, only Blind Guardian could have done it: this album’s most peculiar trait, which is having a metal structure, metal elements, despite the lack of distorted sounds, was only possible because this is the next step in the evolution of the band’s sound too. Those elements, which are the features that trace the album to its makers, are there because they come from a band who has always used them, in every song through every album, always merging metal sounds with symphonic effects; this made such step possible.

In conclusion, this is not an easy album. Just as it wasn’t easy to write and compose (23 years!), it’s not immediately easy to listen to and comprehend, and writing a review is even harder; we feel like we lack the proper instruments to do such things. The reality is that we, and this album, just need our time; then every piece falls into place. And we are left amazed, moved and thrilled by its delightful melodies.