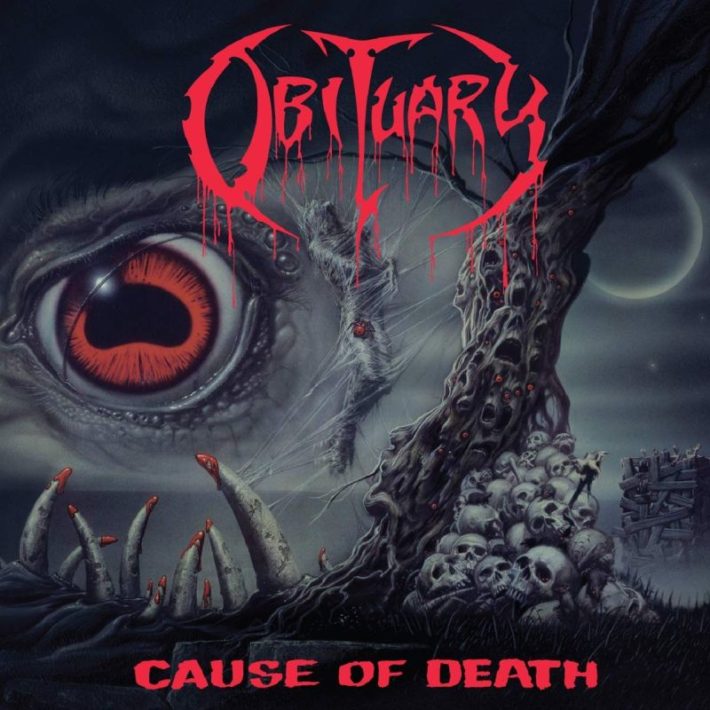 There were a lot of very important 30-year anniversary’s this year coming from the Florida death metal scene. It was a very important time and place this kind of music, as pioneers of death metal were pushing the still young style to new frontiers year by year. In 1990 there were several important debuts – Atheist’s “Piece of Time”, Deicide’s self-titled, Cannibal Corpse’s “Eaten Back to Life”, Nocturnus’ “The Key”, and many others. But there were other established Florida bands releasing new pieces, including Death’s third album “Spiritual Healing”, and the one we’ll talk about today, Obituary’s sophomore “Cause of Death”.

As I said, the name of the game back then was innovation. The general precepts of death metal were established already, but the young pioneers were hungry for more. A lot of bands ended up pushing further, until some achieved the first few releases of technical and progressive death metal such as Atheist’s “An Unquestionable Presence” and Death’s “Human”. Others didn’t push technical proficiency but established their own peculiar styles, many with great success.

Obituary definitely falls in the second category, almost ironically in opposition to the first. Obituary were always known as a band that doesn’t care about instrumental showmanship. Some would even claim their music to be very simple. Simple or not, it certainly employs a sort of “less is more” philosophy in a successful way, developing their own unique sound which went on to be hugely influential in death metal up to this day. In any neo-old school death metal you’ll hear at least some Obituary.

Obituary’s debut, 1989’s “Slowly We Rot” already established them as a death metal force. It was notably a very sludgy, thick album, working just as well in slow tempos as it did in faster ones. A year later, “Cause of Death” ended up being an improvement in every department. The formula was perfected. A couple important innovations were apparent – James Murphy, a guitarist who played on Death’s “Spiritual Healing” joined Obituary on this album, and unfortunately just his one. His lead playing greatly added to their style, and his wailing solos are always mentioned when talking about this album.

Second, there was a number of creepy ambient interludes and outros added to the songs. A minor detail, surely, but it added a lot to the dark and sinister feel of the album. One just needs to look at the great album cover by Michael Whelan, a haunting Lovecraftian scene with dark colors penetrated by bright reds. It was a great choice of art and the image will keep appearing in your mind while you listen to the music. In other words, the soundscape became much more tangible and engrossing.

“Infected” is as great an opener as you can get. Endlessly thick and slow guitar tones open for Murphy’s sombre leads, before ferociously exploding and introducing the star of the show – vocalist John Tardy. A lot has been said about his vocals, and while influential and spawning many pretenders, nobody can quite manage to do his style at his level. There’s plenty death metal vocalists matching the tone of his dry, shouty snarls. Yet nobody sounds as monstrous as him, putting in so much passion and energy. Another great thing about his vocal work is that he doesn’t overdo it, as in, his performances are often used sparsely within the songs, piercing the atmosphere at the right moments instead of continually yammering. “Infected” is a perfect example of this, where Tardy makes himself heard only a couple of times for just a couple of stanzas.

“Body Bag” continues as sludgy as ever, but opens with quite a groovy riff and Donald Tardy’s equally groovy drumwork, which is one thing Obituary also does very well. Their lack of technicality is made up for with, amongst other things, their mastery of rhythm. Speaking of groove, I’d also contend you’d be hard pressed to find a groove metal band that doesn’t have at least some Obituary within their DNA.

Next we get “Chopped In Half”, spawning the “CHOPPED IN HAUUGHHH” meme, which is also something you’ll find yourself imitating every time the song starts. This one goes fast and does some classic OSDM tropes exceedingly well. It’s followed by a great cover of Celtic Frost’s “Circle Of The Tyrants”, just so you remind yourself where a lot of these riffs came from.

“Dying” is what many find to the highlight of the album. The groove goes hard on this one with a riff you heard from anyone between “Lamb of God” to “Soulfly”, and it is a question who copped it from who – Pantera or Obituary. Still, the magic of the song goes beyond, and by its end it expertly runs from fast to mid to slow tempos, with John Tardy appearing only in the final third to deliver a career-defining performance.

“Find The Arise” is actually an old song, demoed back when the band were still called “Executioner”. I’d never would’ve thought honestly it was something from their younger days. The recording and performance are tight as hell, and it is likely the most aggressive and fastest track on the album. The next track, “Cause of Death” aptly epitomizes all that is good about the album – groovy riffs, great leads, sludgy stomps and monstrous vocals. Same goes for “Memories Remain”, this time including some spooky synth work. Finally, the album closes with “Turned Inside Out”, a bouncy groovefest that is sure to make you band your head if for some strange reason you forgot to do so with the rest of the album. As great a closer as you can get.

As I’m sure is clear by now, “Cause of Death” has a plethora of great moments, stylings and methods that not only make the album enjoyable in itself, but that resonate far in the future of death metal. The genre was quite young in 1990s, but the creative impetus was massive, especially in the Florida scene. Some influenced the continued development of the genre less, some did it more, and Obituary certainly veers towards “more”. Their style was certainly tight enough not only to ensure them a lasting legacy, but to keep the band existing for over 30 years now (with a slight pause after 97), still writing, still touring, still keeping the Florida death metal legacy alive.