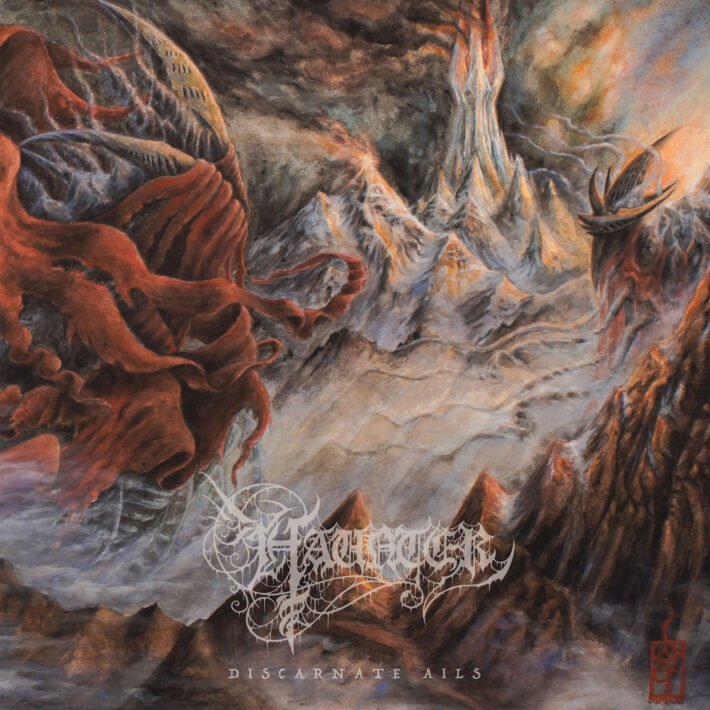 Every once in a while, something comes across the promo pile that humbles you. Something that reminds you why you listen to metal, why you keep up with new releases. Haunter have shown me the light.

This record sounds gigantic. Compared to their last release, which I thought felt a little too stripped down, Discarnate Ails has a massive, textured feeling throughout. I love it when an album feels like it “fills out the space”, where the mix fills your ears and wraps you completely in its terrible embrace. Haunter have nailed it. This album is overwhelming in the best possible way.

The first track “Overgrown with the Moss” is a sprawling, swirling maelstrom of riffs. Over the course of ten minutes, the song grows and morphs like a supernatural horror, consuming its surroundings and growing stronger with each passing riff. Layered vocals with varied techniques create an inhuman image, like the howls of something unholy. The guitars weave between melody and dissonant motifs, in an abrasive and hostile yet simultaneously atmospheric way. Heavy riffs punctuate the dissonance, before weaving back in with the dissonant motifs. Haunter seem to switch between more traditional death metal riffing and techy-dissonant cacophony in such a natural way that neither style feels out of place.

Middle track “Spiritual Illness” takes a turn, as Haunter combine their monstrosity with a style directly off Blackwater Park. Opeth-ian riffs interspersed with dissonance and inhuman growls create an entirely unique feeling, one that is simultaneously terrifying and yet oddly inviting. Naturally, performances on this album throughout are absolutely mind-blowing, as this kind of style simply would not work otherwise.

Final track “Chained at the Helm of the Eschaton” leans heavily on dissonant motifs and recurring ideas. Despite being fourteen minutes long, the track feels less like the winding maelstrom of the opener and more like a recollection on how far we’ve come. The dissonant motifs we hear become familiar, as Haunter embraces you with their riffing. The epic conclusion of the album takes us down multiple different routes with different sounds within the terrible realm of death metal, and feels like an ebb and flow of hostility, before breaking off entirely into the melancholic clean guitar that fades us out.

Haunter’s Discarnate Ails is a full experience that my words could never fully hope to describe. Despite being only 31 minutes long, this record is packed full of ideas, and tells a complete and satisfying story. Haunter manage to utilize dissonance in such an intentional and deliberate way that the dissonant motifs become like a melody in and of itself, guiding the listener down the path laid out for them. Mind-blowingly creative yet destructively heavy, Haunter have created something remarkable here. It’s taken me a while to fully digest this album and I’m still blown away by it every time I listen. This is a must-hear.