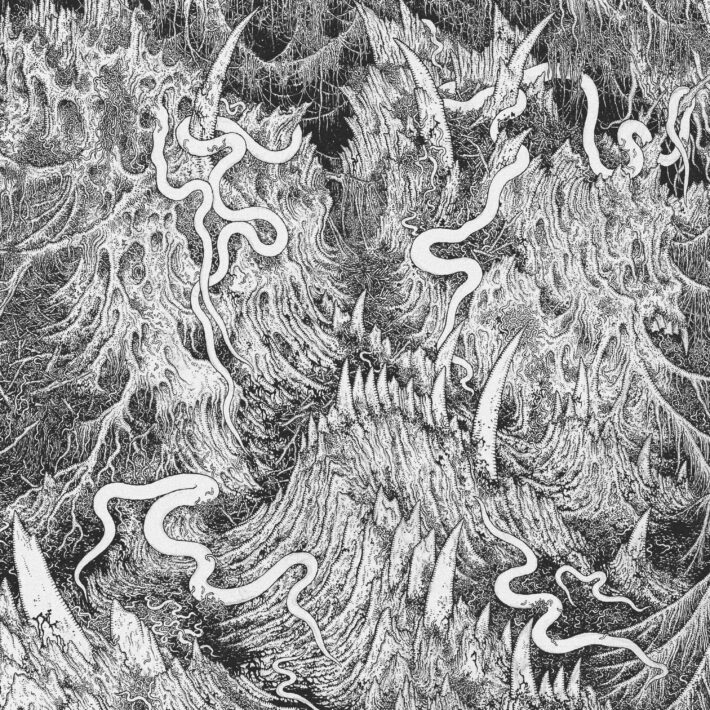 Malignant Altar have broken up, which sucks. The Texas-based group announced their dissolution after this split was ready to be released. I’m not sure if there are more recordings coming out after this, but either way, the band made an impact with their first full-length release, and I was looking forward to what they had to offer. Reviewing a posthumous release can get weird, so much so that it almost overshadowed the contributions from Gosudar, the first band featured on this split. However, this Russian group was good enough to stand out despite the circumstances.

Both bands have released one full-length release complemented by shorter releases prior to this split. Both bands play a similar style of death metal that borders on death/doom. Gosudar takes a more distorted, cavernous approach, with booming drums, fuller guitars, and a songwriting style that switches between stutters and long bell tones. Malignant Altar play close to the same thing, except the guitars are more distorted, the drums are more active, the production has more of an oily sheen to it, and the vocals have more of a bark than a growl to them. If you’ve listened to either Gosudar’s debut full-length Morbid Despotic Ritual or Malignant Altar’s Realms Of Exquisite Morbidity, you won’t hear anything new here.

Gosudar and Malignant Altar complement each other surprisingly well. Neither band outshines the other on this split, and both are similar enough to the other to maintain continuity throughout the release, but different enough to have their own identity and strengths. Gosudar do a bit more with their articulation and Malignant Altar create a more complete atmosphere. Both bands sound a bit too much like a mash up between Hooded Menace and Tomb Mold, but that’s not a huge problem when listening to this.

All musicians involved bring stellar performances, as expected. Malignant Altar’s drummer and Gosudar’s vocalist stand out as the best of the bunch. While I preferred the tone of the guitars on the Gosudar half of the split, both groups articulated well and used their instruments beyond just playing the correct notes at the correct time.

The riffs on this split are effective within the context of individual songs, but the atmosphere and more general song structure seems to be the songwriting focus. This is just as well, because the riffs can be frustratingly similar to one another at times. There are only four songs here, but they still overlap enough that I got a sense of deja vu while listening. On the subject of there only being four songs: Did we really need a cover track? Malignant Altar do a fine job, but it seems like a wasted opportunity. Maybe they ran out of time before breaking up. I don’t know.

I approached listening to this release differently because it was a split. Maybe if the two bands teamed up on a full album, I would be more critical, but as it is, I see this as more of a bonus for fans of either band than a release that’s meant to stand on its own. This split fulfills everything that I’d want to see from this type of release: two interesting, similar and yet unique bands writing music that complements each other and remains cohesive. Outside of the above songwriting concerns, my only large complaint is that these two groups won’t be able to team up again. If you didn’t like either Malignant Altar or Gosudar before, nothing about this split will change your mind. If you’ve heard of and love only one of these groups, congratulations on finding a new favorite band. There’s nothing new here, but not much is missing from this split.