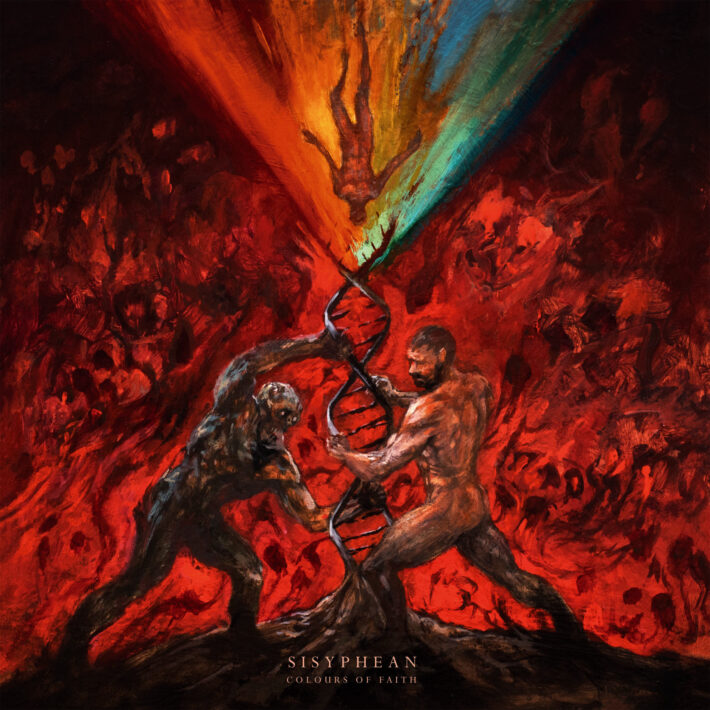 Dissonance requires context. Whether or not Sisyphean play sufficiently dissonant black metal to you will depend on how much Serpent Column and Imperial Triumphant you’ve consumed. Colours Of Faith contains close-together lines, but within the context of their subgenre their songs sound pleasant and soothing. Some of this can be credited to an excellent production job, but some to a songwriting approach that manages to incorporate plenty of crunchy moments while maintaining clear melodic lines. When those melodic lines lock in, Colours Of Faith creates joy.

Inevitably, those melodic lines disappear. And with them disappear my appreciation for this record. From the start, there are passages where Sisyphean just let the general black metal aura vamp for a while and don’t do anything to progress the music. See 4:10 in “Scorched Timeless” for the first example. These moments only serve to bloat the runtime of the record. Sisyphean provide a good contrast to this in the introduction to the final track “Conqueror,” which uses repetitive passages to slowly build into a nice, full metal song. It would have been better to have more of this type of songwriting.

The production aids Sisyphean’s style as previously mentioned. Every instrument pops. The band’s twin focuses on atmosphere and dissonance could have resulted in a record caked in mud and indecipherable moments. Instead you can differentiate most notes, and this allows Sisyphean to make full use of their style. The drums benefit the most from this. A healthy portion of Colours Of Faith’s runtime contains blast beats, but the drummer switches things up enough that I appreciate the ability to focus on every instrument. Every musician plays their part well and all justify the added clarity that the production gives them.

This sums up my issue with Sisyphean’s use of dissonance: it doesn’t resolve. Within the context of the record, clashing harmonies is simply a musical baseline. Colours Of Faith stagnates because it relies on atmosphere and crunched melodies rather than progressing the music. I can forgive this when the melodies are clicking because that is enough to satisfy the need for movement. At other times, when the vamp is active or when Sisyphean attempt to create a spooky moment, there just isn’t enough going on to be worth paying attention to.

To be clear, Colours Of Faith wasn’t a bad album. I just left the listening experience feeling a vague sense of deja vu and wondering what Sisyphean was missing. Despite that feeling, I had a good time with the record. These issues that I raise don’t kill the record, they merely prevent me from loving it. Everything here is perfectly fine. But with a different approach to their overall song structure, Sisyphean could have made a monster of a record instead.

Colours Of Faith contains some great moments and had no real poor elements, but left me feeling unfulfilled. Sisyphean show an understanding of how to create tension, and are aided by knack for writing great melodies and strong production, but they need more dynamic songwriting in order to take the next step forward. Still, I’d recommend this to anyone looking for more dissonant, harsh metal, especially those who feel that the genre occasionally goes too far.