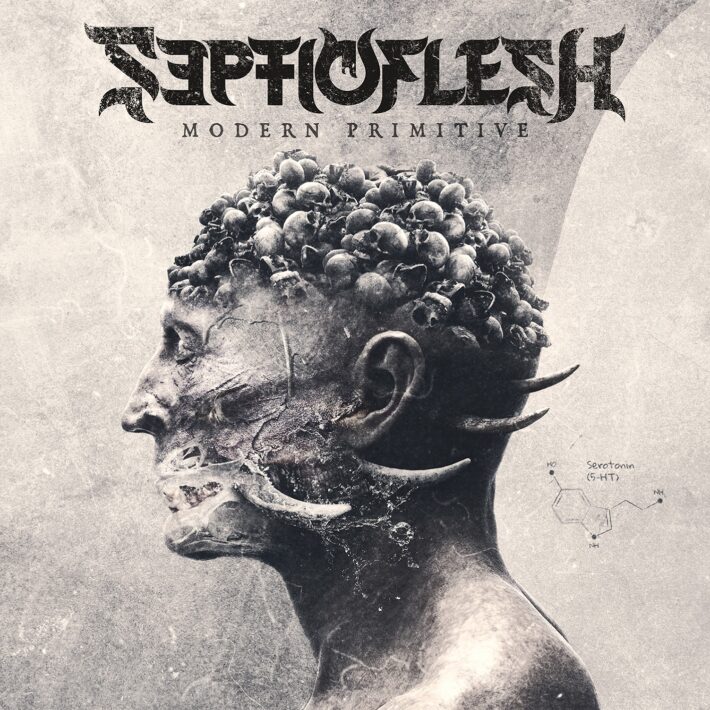 Modern Primitive marks the return of symphonic death metal giants Septicflesh for their eleventh studio album, and their first and first in five years. They’ve made some astounding music over the years, including back to back home runs Communion and The Great Mass, but follow-ups Titan and Codex Omega both failed to grab me the way their predecessors did. But a band of this caliber will always be worth paying attention to. I approached Modern Primitive expecting the worst and was pleasantly surprised.

For those who don’t know them, Septicflesh play death metal with the symphonic sub-tag woven into the fabric of their sound. Rather than adding strings for flavor or featuring a violin solo, Septicflesh write from the ground up with their full instrumentation in mind. What results is music that doesn’t hit as hard as some of its peers, but has the potential for grandiosity on a larger scale. It also has the potential to turn into overly-written slop. Septicflesh have generally succeeded throughout their long years, but past success doesn’t indicate a promising future.

Opening track “The Collector” gives you all you need to know about this record. Fantastic melodies and an interesting song structure, some earned big moments, vocals that sometimes elevate the music and sometimes fail, well-incorporated orchestral elements, and an approach to production that threatens to ruin it all. Septicflesh’s strengths come through on Modern Primitive as well as they have in quite some time.

The song structures simply show a band at the top of their game. The lead line weaves throughout the instruments, going from vocals to guitars to horns and back again. The transitions between passages sound smooth as hell and are the obvious work of old masters. But it’s easy to get lost in the details: they can simply write excellent melodies. All of the tricks and special moments lead to that.

Septicflesh employs a balanced mixture of clean and growling vocals. While I quite enjoy the clean vocals, especially on tracks like “Coming Storm,” the growls are more of a mixed bag. The louder growls sound solid as they usually do on Septicflesh records, but there are some attempts at whispers that just fail. A minor issue, but one that pops up and can’t be avoided.

I can forgive the vocal problems and some minor songwriting issues that pop up because they are solid attempts at doing something interesting that simply don’t pan out. The band tried to do something interesting and failed hard, but at least they tried. The production is a far more concerning issue because it’s a safe, boring approach. It lowers the ceiling of the record in order to raise the floor, and tries to remain inoffensive to everyone while being loved by no one. That’s what killed the last two Septicflesh records for me, and to see the issues pop up again is concerning. Whispers of this approach crop up elsewhere, but thankfully these whispers are often too quiet to hear. Playing it safe is the thread that could have unraveled everything that Septicflesh accomplished with Modern Primitive.

Very few bands will pop out their best album multiple decades into their career. Septicflesh is not an exception. However, Modern Primitive still sounds great and provides a mixture of strengths that only Septicflesh can deliver. Anyone who enjoys symphonic elements in their music or can appreciate the less rambunctious side of death metal should check out Modern Primitive. And then follow it up with the rest of Septicflesh’s records if you somehow missed them.