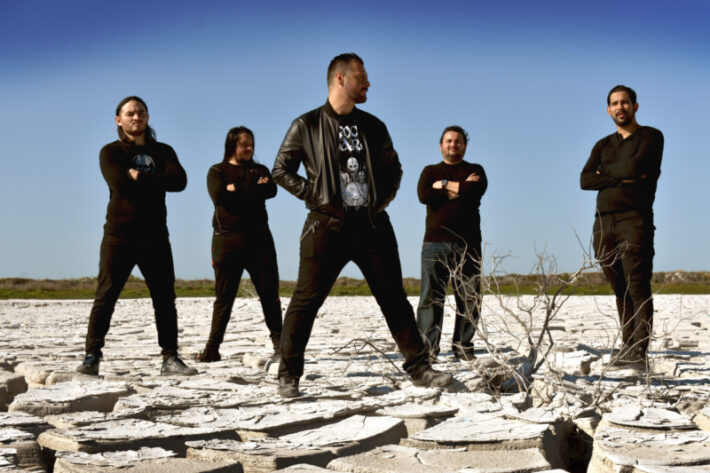 Melodeath band Death Scythe take no prisioners, and with their savage sound they’re showing the world the brutal side of Xibalba. Within a month the band will unleash their newest album Killing For Pleasure Forever, so I had a chat with the band. And spoiler alert, they’re just getting started…

Hello, this is Rick! Who am I talking to, and do you play in the band?

Hello Rick! This is Gerardo Mendoza, from Merida, Yucatan. I’m in charge of the screaming and the crazy sounds!

Death Scythe seems to have a somewhat turbulent past; formed in 2003 you went on until 2009. You then split up for nine years, came back in 2018 and you released your second album. Then your bassist became guitarist, and you also hired a new drummer.
Can you tell me more about the history of the band, explain what went on during the breakup?

Sure! It was that time, I think all bands have to go through it, where you need to balance your personal life and the band. At that time I was pursuing a career as a 3D animator so I had moved outside the country. When I left, the band went on hiatus and other members like Roberto Cervera [guitarist] started other music projects.

It was around 2018, where the Yucatecan scene became very strong with bands like Uberhate and Atversus, those bands really inspiring me to make music again. So I grabbed the phone and we started conversations about having at least a comeback show.
It was a crazy idea since I was living in Canada at the time. But in June of that year I was going to Mexico for vacations and everything fitted together to do the show. It was amazing! Can you imagine playing your songs after 9 years? It was a dream come true!

After this experience and seeing the reaction of the people we decided to make a formal comeback as an active band, since I was moving back to Mexico.

We had to make some changes in the band since Alexis Castelan [former guitarist] and Mario Gonzalez [former drummer] left the band due personal issues. We invited Eduardo Perez “Kili” , a very good friend of ours.
Rafael Barreiro decided that he wanted to try guitars and we recruited his friend, David Montero, to play the bass.

And just like that we were back! And we started to work on what will become Descending into Xibalba.

Yes, you are right! Back in 2009 when we made Killing For Pleasure we didn’t have the resources and also the proper time to do the album we really wanted. Also the album was just known in the Mexico area, so we thought that we could do it in a better way, with our new sound.

It was an idea that we always had in our head for a long time. We really love those songs, we believe that it needed a second chance.
So we came up with the idea to re-record Killing For Pleasure Forever, with special guests from local bands in Yucatan and changes on all the songs. New riffs, new art and also I had the opportunity to re-write some of the lyrics.

So you are listening to Killing For Pleasure as we always imagined. It’s great, because the people that had known us from before will enjoy the new perspective of the album, and for those that never have listened to us before it will be a completely new album.

Death Scythe hails from Yucatan in Mexico, and themes about the Mayan are present in your lyrics. What kind of stories do you want to tell with such themes? Is your heritage important in the context of your music?

Here in Yucatan we are very proud of our mayan heritage, it’s really alive! You can see it everywhere here; in the language we use, the food, the traditions etc.
It’s very easy to be inspired since it’s a culture that’s full of legends, gods, heroes and great wars, but more important for us is that the Mayan culture has a beautiful view about death as a cycle, so it fits perfectly what we want to represent in our music. Our roots are important and really reflect who we are now.

You shot three video clips for the new album. Why did you choose those specific songs? And where did you shoot the video for Wind? What’s the story behind it?

Well, the first one was Touched By A Scythe. We really wanted something very fierce and raw as a first single. That song is one the first ones we ever created so it’s very special for us. One of our guests on the album is in this song, Rach Espinosa. He is the guitarist of Uberhate and also the producer of the album, so it was a great honor to have him with a guitar solo in this song! Such a killer solo!

The video was made completely by the band, it was a great experience since we had never done a video just by ourselves. Also it was hard because I was in Canada at that time, so I recorded all my shots and then the shots from them were recorded in Mexico, everything was put together in edit, and boom! We had ourselves made a video for Touched By A Scythe!

The second single was Wind, for this one we wanted to show the more melodic part of Death Scythe. For the video we were looking for something big; so we made it in a dry swamp and used a drone for the big shots. For the first time in a Death Scythe video we hired an actress too, Carolina Peñúñuri. The video was directed by Humberto Rodriguez, vocalist of The Genotype and one of our vocal guests, on the song The Fall Of The Empire.

It was a brutal shooting, we woke up at 4 am to be there around 5 am to have the sunrise, then the sun was very strong! I almost fainted twice! But in the end we did it and we are very happy with the result!

For the third single, Killer Faith, we had the opportunity to do it in this abandoned maya type restaurant: it’s a huge place with scale replicas of the most famous mayan pyramids, and a cenote too! Killer Faith is a strong song so we wanted something simpler to focus more on the music and the lyrics. It was a very hot day! Everyday is hot here in Yucatan!

The album is going to be released on August 26th. What then? Do you have any plans for a tour?

Yes! Spoiler, we will release a last video for Hollow Darkness days before the album release: it will be a great surprise! We also have an album streaming the same day of the release! We are very excited! Death Scythe will be playing around Mexico by the end of 2022; we are looking to play outside internationally too.

Also we are already planning a new album! Stay tuned!

Thanks a lot with everyone in Death Scythe for their time! Killing For Pleasure Forever will be released on August 26th and you can get a taste of it on Bandcamp. Don’t forget to follow the band on Facebook and Instagram too!