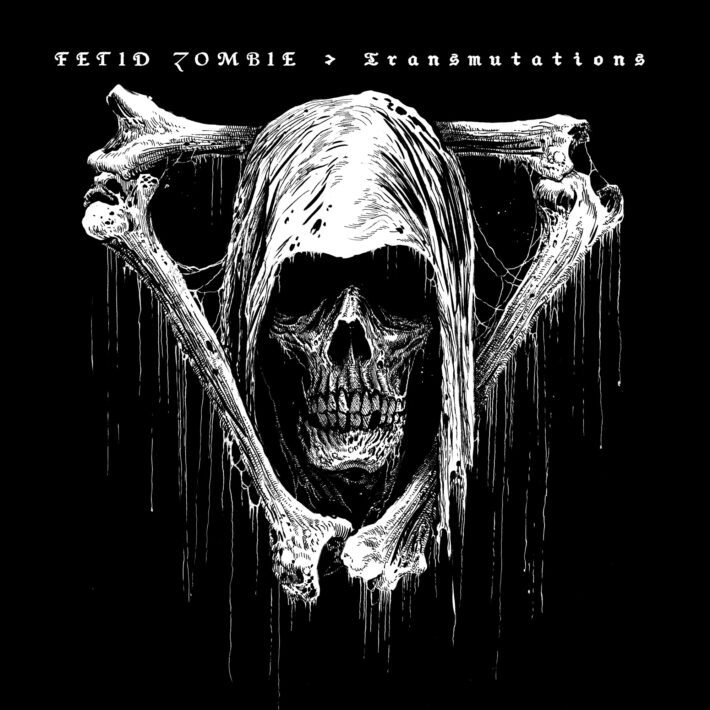 Look at that album cover again. Now look at the band name. Fetid Zombie. If you haven’t listened to this band already, you surely feel confident in how they sound. Nasty, grimy, lo-fi death metal awaits you, right? Not quite.

Fetid Zombie have been playing death metal for quite a while now, having released six full length albums prior to Transmutations since 2007. According to metal archives, Transmutations had a cassette-only release last summer via Morbid Visions Music. Transcending Obscurity have decided to help this record, well, transcend the obscurity of such a release by giving it a more widespread and accessible digital release. As far as the music goes, Fetid Zombie play “dark and atmospheric death metal that is rooted in the heavy metal sound.” Mark Reddick and company have also clearly been listening to copious quantities of doom metal, to their artistic benefit. Between the atmospheric focus, the exploratory song structure, and the occasional clean vocals, death metal fans may not get what they expect with Transmutations.

Fetid Zombie don’t follow the rules of death metal. They don’t shatter said rules in roaring defiance to create something progressive or avant-garde. Instead, they seem to simply walk their own path through the metal underground. This casually flippant approach causes the band to create their strongest moments: Rather than deal with the confines of their peers, Fetid Zombie have no issue bringing in any vocalist or guitar tone that fits the particular moment.

The band brings intriguing variety to the table.Transmutations doesn’t stick to any sound for too long. Although the release never strays from death metal, Fetid Zombie troll the depths of the genre and take whatever they feel like. This helps their atmospheric focus. Because you’re never sure if, for example, the low rumbling growls of the vocalist will give way to clean female vocals, you never get too comfortable with the current sound. This lets the atmosphere sink into your brain like a vague foul stench, where it lingers for a surprising amount of time.

The other side of the variety coin does not spark as much joy: Large portions of Transmutations feel like aimless wandering. This issue mainly rears its head on the first and last tracks, both of which feel like they should end at least three times during their stretched out eight-plus minute time frames before they finally do. The other tracks don’t avoid this issue either. Transmutations feels as if the band focused too much on creating interesting moments and passages and let the greater song and album structure fall by their wayside. To Fetid Zombie’s credit, many passages on Transmutations sound fantastic. Usually disappointment surrounds them.

This disappointment often stems from songwriting issues. Too often, the riffs bore me and don’t carry their weight. This again feels like an issue of focus and priorities. Fetid Zombie may have zoned in on their atmosphere at the expense of other aspects of their songcrafting. This kills any chance at longevity that this record had. But I have the sneaking suspicion that I’m in the minority for that. There is a certain type of underground death metal fan who may be awestruck and ensorcelled by Fetid Zombie, and who may try to shove it under the noses of their friends like a particularly rotten apple.

I wouldn’t be shocked to see Transmutations end up as one of the best albums of the year for some people. But not for me. Although there were moments of sharpness, Fetid Zombie’s newest release felt generic and forgettable. I would recommend Transmutation to people scouring the corners of the internet for their next fix of intrigue. There has been a glut of great death metal recently, and Fetid Zombie doesn’t make the cut.