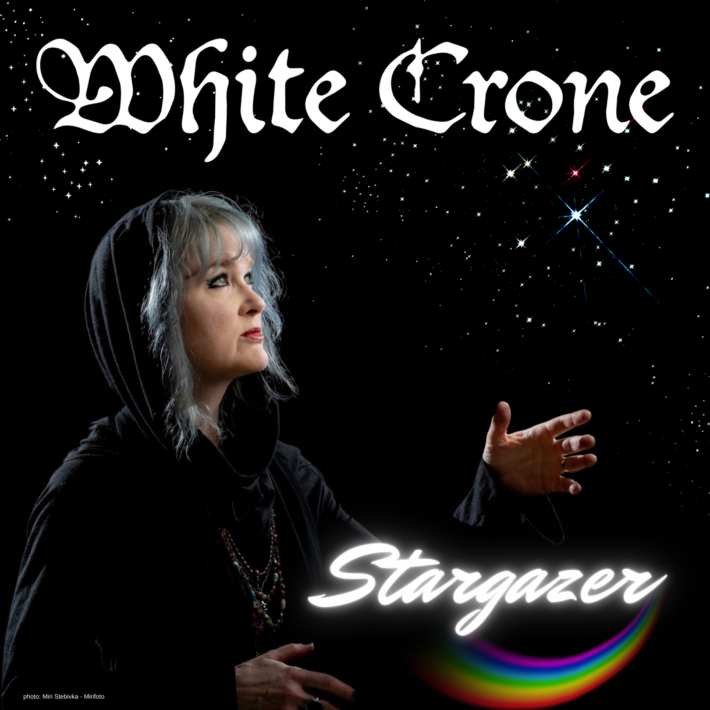 Blues musician Lisa Mann has been walking down a new, obscure path these days: under the moniker of White Crone she has already released an album and more recently a cover of the Rainbow classic “Stargazer”; on such occasion, we had a small talk.

Hello Lisa! So, you’re an award-winning blues artist with five albums behind your back; last year you released “The Poisoner” under the name White Crone, and now you’re back with this cover in honor of Ronnie James Dio.
What led you to start this project and make such a radical style change?

Hey Rick!  Well, to be honest, I started out in rock and metal in my early years.  As a young budding bassist and singer, I was a huge fan of Iron Maiden, Dio, Mercyful Fate and the like, I loved all kinds of metal from the classics to Bay Area Thrash.

I was in a few metal/ crossover punk bands as a teen, but decided I wanted to play for a living and started working in Top 40 bars.  I did that for many years, playing everything from rock to pop to reggae, and I was even in an Irish band for a while.  It was after I returned to Portland from a few years of doing rock bar gigs in Seattle that I came into blues music, which was the best way to get paying gigs in Portland.  I absolutely fell in love with it! But of course I never lost my love of heavy metal.

As a recording artist, I always wanted to create a metal album, but I try to wait until I’m inspired to write something.  Oddly it was after hearing Ghost’s “Cirice” during that Grammy voting season that I got inspired.  I started delving into their music, which is very heavy on songcrafting, and it hit me, “Oh, this guy doesn’t give a fuck what anybody thinks.”  All of a sudden, I started hearing melodies in my head, when I was taking a walk, or driving, or showering.  I would pull over or hop out of the shower to sing them into my phone app.  Pretty soon I had a big amalgam of material, which began coalescing into songs.

I started pre-production at home for what I thought would be a personal project.  After it all grew into a full album over the course of a year or more, I decided I would record it in studio, and release it to the public.  I knew it was risky to my “blues cred” but a lot of my blues fans actually love it!

As a contemporary blues musician, did you find playing heavy metal to be much different? After all, metal music has its roots in blues and rock’n’roll, and such influences were visible in “The Poisoner” as well.

My earliest bass influences were John Paul Jones, Jack Bruce, Roger Glover, Geezer Butler – all very blues-based bass players, playing what we would call proto-metal today.  Once I started playing blues later in life, it was very apparent where their bass lines came from – those guys were listening to blues.

Without blues, there would have been no Black Sabbath, and without Sabbath, no metal as we know it.  But after a while, the blues got stripped out of metal in favor of more classical, and other modern elements.  Classical music is more prescribed, and most metal is as well.  In classical music, they put a piece of sheet music in front of your face and that’s how it goes, and that’s how I approached “The Poisoner”.

I faithfully recreated the guitar and bass parts I pre-recorded at home when it came time to do the final tracking at Opal Studio in Portland. Additionally, I bought a set of e-drums, and mapped out all the drum parts exactly as I wanted them for the drummer I hired, Oregon-based drum instructor Larry London.  I had former Glacier guitarist Mehdi Farjami do guest solos on two songs, and gave him a lot of specific direction in the studio.  They both greatly improved on what I gave them, of course, as they are far more skilled than I am at their instruments.  But metal songwriting and performance is far more “this is how it goes” than blues.

When writing and recording much of my original blues material, I am far more likely to just scratch out bass and vocals, and tell the guitarist “play something Hubert Sumlin-like here.”  In that regard I suppose blues is far more free-form, but I don’t find metal restrictive.  It’s just… different.

Why did you choose to cover Ronnie James Dio of all singers, and why a song from his Rainbow era?

Ronnie James Dio was such a huge influence on my singing, especially those first two solo albums.  I used to sing along to those albums in my room, and my mom loved to hear me sing his songs. (King Diamond? Not so much.)  My mom was a fan of great singers, she raised me on Barbara Streisand and Melissa Manchester.  She was also a big Dio fan, and even accompanied me to his concerts.
Dio has a special place in my heart, memories of him are wrapped up in memories of my mom.  She died two years after he did, and for a long time, I couldn’t listen to Dio without crying from grief for the loss of them both.

As a teen I wasn’t as aware of his Rainbow material.  I had heard it, but didn’t own those albums.  It wasn’t until later in life that I really took time to listen to “Stargazer” from front to back.  I heard it in the car one day and while listening to the long outro, his voice was so impassioned I was brought to tears again.

It’s a song about grief and regret.  So for me, it’s not about the era, or the band, it’s about that voice, that performance, and the agonizing mythology of the lyrics.  “Stargazer” is just a cathartic pleasure to sing, it just wrings everything out of you, every moment of grief and pain you’ve ever experienced.  Dio had such a way of expressing himself emotionally, and coupled with his technical ability, that makes his shoes impossible to fill.  But I did the best I could in my own way, I hope.

In order to record “The Poisoner” you taught yourself to play both drums and guitar; you had already hired a professional drummer, but why did you choose not to record yourself the guitar parts this time?

Alastair Greene and I are good friends, he did the guitars on “Stargazer”. He’s got an incredible background, he played in Alan Parsons band for a long time. He also played in Sugaray Rayford’s band for a while, my husband is the bass player in that band.  I joined them in Europe on a tour in 2019, and we spent a lot of time hanging in the streets of Metz, France.

He’s a headbanger like me, though he is known for blues rock.  He and I kept saying “we have to do something together!”  When it came to Ritchie Blackmore parts, I knew Alastair was the guy.  He is so good on his instrument, especially with slide.  There is no way in hell I could teach myself to play at that caliber in any short period of time.

You employed session musicians on both your album and now this cover, including Vinny Appice amongst others; do you think there’s a live future for this project, with the aid of these valiant musicians?

I really never intended White Crone to be anything more than a recording project.  Having said that, if in the future there is enough interest, who knows?  As for live performance, I am looking forward to doing shows with Splintered Throne.  I joined the band as their lead singer before the pandemic, and we used that time to write a bunch of killer songs.  Splintered Throne will be cooking the new album up in the studio this year, and we look forward to performing to support it.

Nowadays it’s easy to look online and find a cover of any song, remade in whichever genre you’d want; among all this music, what do you think it’s the secret behind a great cover?
What’s the ingredient that makes a cover stand out on its own as a great song, and not just as another copy?

When doing a cover, I guess you can try and be as faithful as possible to the original and re-create it, or you can veer off and do something wildly different with it.  Think of Celtic Frost doing “Mexican Radio”.

In the case of “Stargazer”, I started from the original and tweaked from there.  I changed a few of the chords in the song, firstly based on a mishearing of it, but then I decided I liked the changes better because they sounded sadder.  I didn’t have a scratch track, so Vinny tracked to the original song, along with Cozy Powell.  He kept going after the song ended, and played some fills that were too good to fade out.  That’s why the song is longer.  I really didn’t give him much direction on how to approach it, so it feels different than the original.  I just love what he did.

The same goes for Alastair, and the keyboardist Eric Lawrence.  I sent Alastair the drum, bass and vocal scratch and let him go at it.  He added some extra parts that aren’t in the original song at all that served as the basis for the extended outro.  Then I sent the rough mix to Eric, and he did his own thing as well, adding arpeggios at the end that made the outro very dreamlike.

Like I said before, I usually approach metal in a more proscribed way- “here, play THIS.”  However this time I wanted to use a more organic approach and let the musicians add their own voices.  Then I turned it over to Kevin Hahn at Opal Studio, and he added his voice with the mix and master.  It’s very heavy on the guitar, so it features Alastair’s power nicely.  So in the case of “Stargazer”, I think the secret ingredient was this open-handed way of directing the musicians, and making the right choices of musicians to work with.  All in all, I’m very happy with the way the track turned out.

Thanks a lot to Lisa for this interview! “Stargazer” was released on July 9th 2021 and it can be found on White Crone’s Spotify and official website; you can follow White Crone on Facebook, Instagram and Twitter, and listen to “The Poisoner” on Bandcamp.