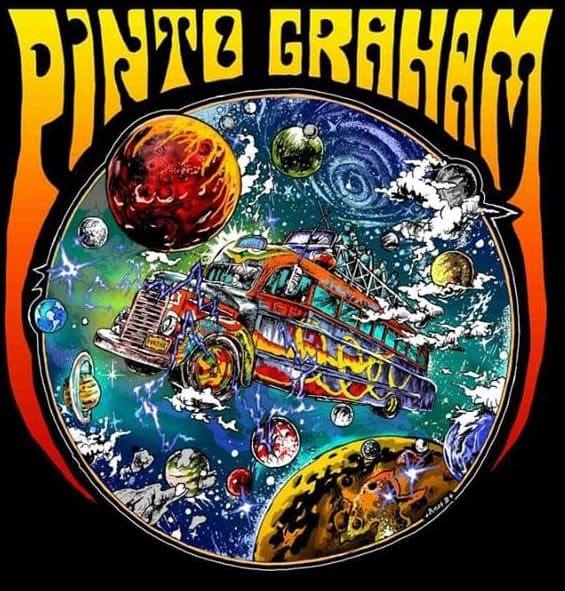 Do you want to hang out with friends this summer, enjoy the sun, drink some beers, and listen to some groovy stoner rock? If your answer is yes, the boys from Pinto Graham have got you covered. Their new record, Dos, will be released this Friday, July 12th. It’s a catchy record, good music to put on at a party (even when there’s non-metalheads around).

Pinto Graham is a stoner rock band from the United States, composed of three people from different regions in America. They released their first album, Uno, back in 2017, and now the gentlemen are back with a new record. The album has a real ‘garage rock band’ sound to it, and because the guys also know to make their music groovy, the music is really fit to put on at a party this summer. However, even though it’s good party-material, it might get a bit boring if you listen to it thoroughly. In other words, the music is fun, but the album in general is a bit monotonous. The songs kind of follow the same structure and have the same sound, without anything in particular that makes one stand out in between the others.

The album’s first song, Further, starts with a drum beat and a guitar that, bit by bit, starts playing the main riff of the song. The band has two singers that often sing together, one being the main vocalist and the other one doing the background vocals. The vocals do fit the music, but they aren’t too original. After the next song, which kind of follows the same structure, it’s time for Southern Superstitions, one of the stronger songs on the record. It starts with a groovy riff that immediately catches your attention, after which the drums come in and perfectly support the guitar riff. About halfway through the song, there’s a guitar solo that shows the guitarist is quite skilled with his instrument. The second to last song on the record, Old Man of the Mountain, is the other track that stands out on the record. It’s catchy in the same way as Southern Superstitions, and also contains a nice guitar solo. The album’s last song, The Weight, is a slower song, the sound of which kind of reminds of Black Sabbath’s earlier records (just like some other songs on Dos). It’s groovy and catchy, allowing the listener to easily sing along with the chorus.

In general, Dos is a fun album. It’s groovy and quickly catches on, which makes it suitable to put on as background music at a party. However, if you really want to listen to the record and focus on the musical aspects to it, it’ll probably get boring after one or two times. The album has a familiar, not too original sound and there’s quite some riffs that vaguely remind of other band’s riffs. It’s a quite short record, there’s just six songs, and only two of those really stand out from the rest. Even so, if you’ve got about twenty minutes to spare, it’s still a fun listen.