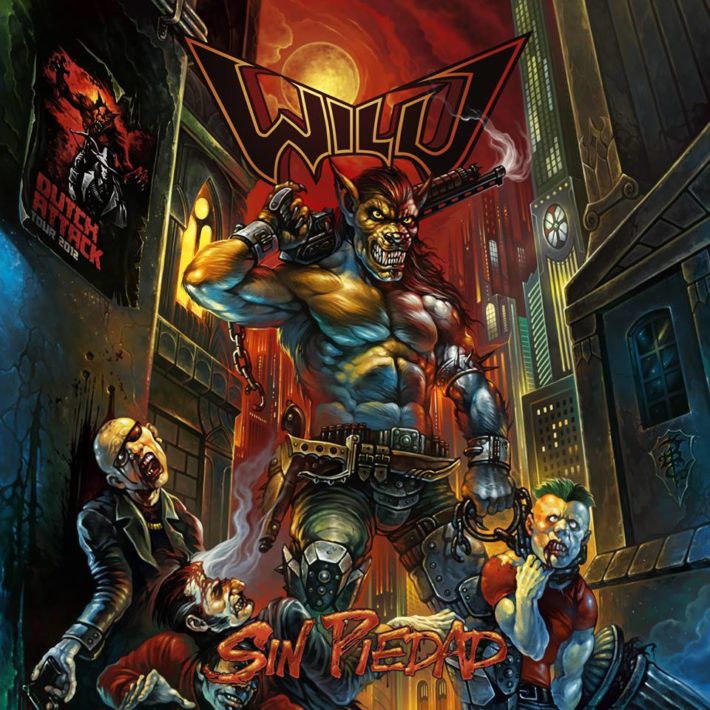 It doesn’t occur too often that a Spanish metal band’s album is distributed worldwide, so when it does, it’s quite promising. And Wild’s Sin Piedad definitely deserves some international attention! Some things that especially stand out are the killer vocals, the great guitar riffs and solos, and the overall catchiness of the album.

Like I mentioned earlier, the songs on this album are very catchy. This is partly because of the energetic drums that, together with the bass and rhythm guitar, lay a perfect base for the lead guitar and vocals to build upon. Regarding the sound, the album perfectly fits the genre.

José García, the band’s singer, has a great voice that fits both the heavy metal and power metal sound. In Sin Piedad, for example, his high, kind of raw voice, has a power metal sound that reminds of Leo Jiménez, singer of another famous Spanish band named Saratoga. In Vuela Alto, though, his vocals remind of Bruce Dickinson’s (Iron Maiden’s singer) classic heavy metal voice.
The guitars, for their part, really contribute to the sound of the band. In songs like Acorralado (Cornered), the rhythm guitar, together with the drums, perfectly fit a power metal song, while in Bajo un Cielo de Cristal (Under a Glass Sky), the double guitars really mimic the original ’80s/’90s heavy metal sound, especially like that of the first few Iron Maiden albums.

The title song, Sin Piedad, starts off the album immediately catching the listener with a fast riff that, together with the other instruments, quickly builds up to a fast-paced power metal song. When José García joins in with his high, raw voice, he sets the tone for the whole album, promising that it will be powerful, energetic, and catchy.

While the first three songs sort of start following the same trend, Wild surprises the listener with the fourth song, Circo Virtual (Virtual Circus), in which the drums and bass guitar have a more important role. Not only do they work together to create an awesome intro, but they are brought into prominence over the course of the whole song and they even have their own solo, which is something that you don’t see very often in the genre.

Unlike the other songs on the album, Madre Tierra (Mother Earth) starts with a relatively slow and relaxed intro. The two guitars each play a melody that harmonizes with the other, building up to the actual body of the song. The chorus sounds less like the fast and aggressive heavy metal sound of the other songs, but has more of a relaxed feeling.

The album’s last song, Luna de Sangre (Blood Moon), contrasts with Madre Tierra. Instead of concluding the album with a relaxed feel, it makes for a powerful finale, full of energy, with a fast drum beat and an exciting guitar riff that, together with García’s powerful vocals, leave the listener in a state of ecstasy.

As we can see, the band succeeds in creating the signature heavy metal/power metal sound. However, no two songs sound the same, it’s really dynamic. Some songs sound like a classic power metal song, some like original or newer heavy metal, and in other songs they create their own sound. The mixing has also been done greatly, so that every instrument, as well as the vocals, really stand out. In conclusion, it’s a great addition to the Spanish metal scene that really deserves listening to.