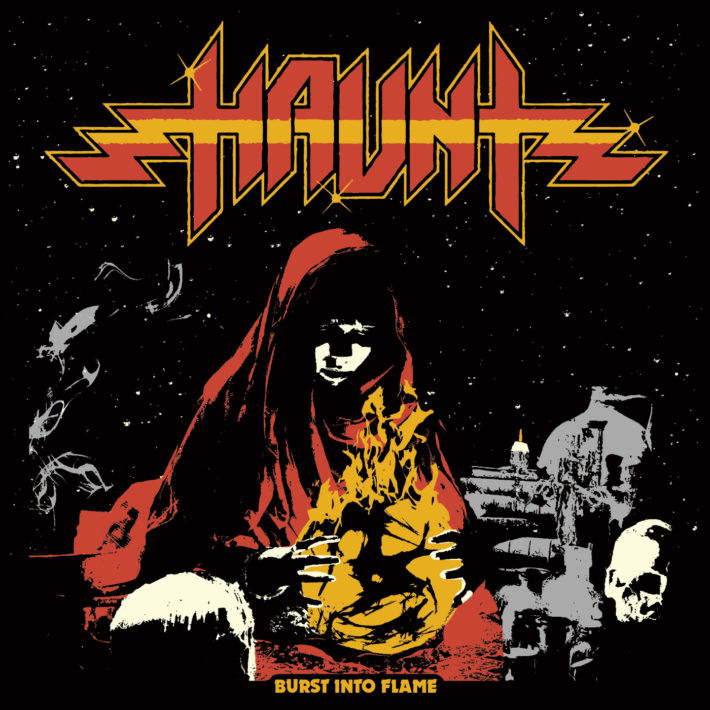 There are some bands that just make it easy to enjoy living in the moment.  The American heavy metal band Haunt effortlessly carries this banner.  Heavily influenced by the NWOBHM crusade, Haunt’s debut LP Burst Into Flame is a heart-pounding trip to the vault of metal past with a crisp, modern-sounding production.  Fans of ‘80s classic heavy metal will digest Haunt’s effort with eagerness and a touch of nostalgia.

Haunt ignites the listener’s attention with the first smoldering offering on Burst Into Flame. The anthemic title track rips, roars, and leaves the listener gasping for oxygen in an effort featuring front man Trevor William Church’s passionate voice and guitarist John Michael Tucker’s shredding riffs. Both men are also part of the doom band Beastmaker, and their cohesion and familiarity with each other’s stylistic choices echo throughout the record. The second track on the album, “Crystal Ball” is an esoteric thrill ride that recalls Maiden’s Powerslave. “Reflectors” opens with atmospheric guitar that settles into a catchy groove á la Judas Priest.

“My Mirage” continues in the vein of previous efforts on Burst Into Flame, offering wailing guitar licks framed by Church’s fervent singing. Haunt wears their influences on their sleeve, but beneath the obvious references there’s originality and panache. “Wanderlust” could be classified as power metal, but don’t let that steer you away from its down-to-earth melodies. Just imagine rolling down the road with the windows open, the anthem pounding in your ears, the wind whipping at your hair.

On track six, Haunt tries something different as “Frozen in Time” fades in to some “whoas.”  Burst Into Flame is full of songs that can easily stand alone and possibly a few that could become radio singles – “Frozen in Time,” with its memorable chorus and catchy drumming and guitarwork, falls into the latter category. It’s difficult not to hear Maiden in the opening riff of “Heroes.” The guitar is heavily featured in the first minute of the song with a thrashy riff that has mosh pit written all over it.

“Can’t Get Back” is one of the weaker efforts on Burst Into Flame, perhaps because it lacks infectious melodies and doesn’t bring anything new to the table. “Looking Glass” is exactly that – a reflection of the 38-minutes of thrilling, no-holds-barred heavy metal that is Burst into Flame.  One thing to point out about the finale is that Haunt seems to take a step outside of their influences for a moment and truly comes into their own.

Burst into Flame is an energetic, enjoyable eruption of heavy metal that keeps going long after the embers have faded into silence. The album is a testament to Haunt’s hard work and dedication to their craft. Fans of Iron Maiden, Judas Priest, Diamond Head, and Angel Witch will find material to enjoy on Burst Into Flame. This is definitely one of the best old school heavy metal releases of the year – so crank up the volume, get your body moving to the rhythm, and plunge right in to the fiery blaze of Haunt’s Burst Into Flame!