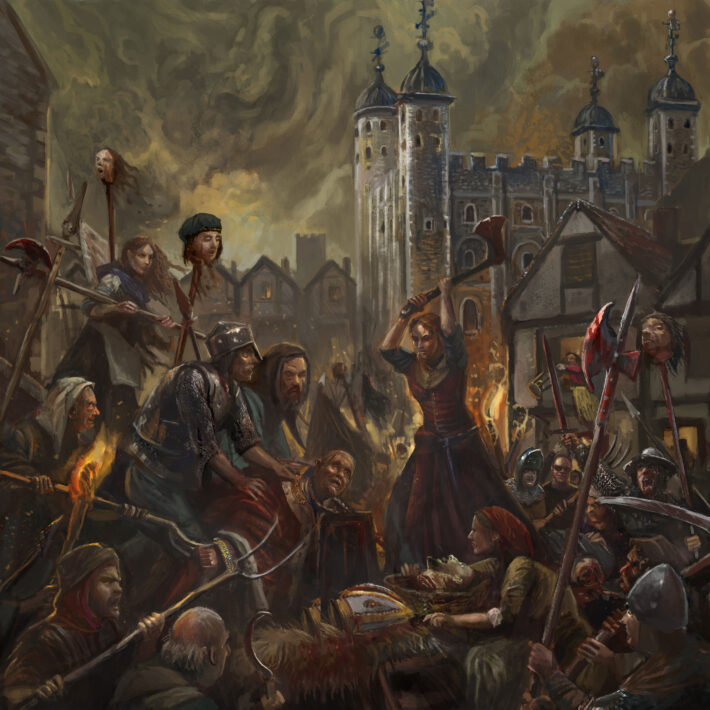 Started by history nerd Dane Cross as a solo project, Sacred Son already have three black metal full lengths under their belt. Now a full-fledged band, they are releasing their biggest project yet – a concept album about the Peasant’s Revolt of 1381, re-examining the Great Uprising as a proto-revolutionary event in English history. Through allegory he describes the revolt in visceral detail, in an effort to revive its righteous anti-fascist inspiration in the modern day.

Following a foreboding intro, the 13-minute monolith title track kicks off with tremolo guitar leading into a fierce blast section. The drums stand out most on this track, as the transitions between blasts and gallops feel great, and his fills stand out among the repetition in the guitars. The single “Le Blakheth” has the most dynamics, featuring tempo changes and a variety of riffing styles. The song hangs on a crushing rhythmic section before transitioning into a double-bass groove with tremolo guitar on top. An atmospheric section leads into a heavy doom section, which leads into a mid-paced gallop with some bright guitars.

“The Boy King” and the final track each begin with a doom-influenced section with lamenting guitars that eventually lead into a brighter blast. The outro is mostly slow, but they throw in some intermittent sprints. Unfortunately, there isn’t much to differentiate the two songs, as they both feel like they’re missing a hook, and as a result they largely blend together into a fairly unremarkable mass. Their placement on the album makes the music feel like it is slowly fading out. This makes the album feel longer than it is, and ultimately ends up being a detriment.

Despite the two solid tracks making up the front half, the entire album feels inconsistent due to the slower, less riff-driven second half. While the doomier, atmospheric approach can certainly work, it struggles here due to the transition from the more aggressive A-side. I felt that the slower sections seemed to drag, and the record wasn’t always able to recapture the earlier energy. Despite that, some solid riff writing prevents this issue from dragging the entire record down.

Ultimately, The Foul Deth of Engelond comes out to be a good albeit inconsistent album with brief flashes of greatness. The historical concept is largely limited to the verbose lyrics and the atmospheric sections, and I felt they could have done more with the world-building. Still, Sacred Son put together an enjoyable record of black metal, and I look forward to hearing how they build on this release in the future.