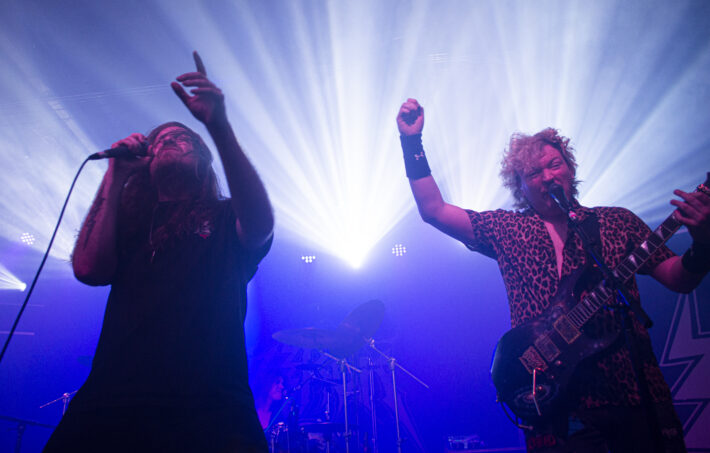 It’s odd to think that The Number of the Beast is as old now as Led Zeppelin I was when I first heard it as a child, letting it repeat over and over on my portable CD player. But with time comes longing, and with longing nostalgia, and with nostalgia, recreation. I don’t believe that 80s heavy metal bands ever ceased to exist or even to be born, but at a certain point they were caught “in between,” not young enough to capture the cultural zeitgeist, and not old enough to evoke that yearning for a forgotten era. The genre has settled now, and as a collective seems aware of its own place in history, which means attention turned to it in the contemporary age is done so in the light of reminiscence.

It is with an attitude of levity, then, that Striker can approach its material and audience. But levity does not mean complacency. In the 80’s, musicians would often come onstage stoned and sloppy, powering through a dynamite set on pure style and energy. Striker was tight, lucid, and precise, blazing through riffs and cleanly-plucked leads, evoking a modern prog outfit in performance and a cadre of nightclub hellions in presence and demeanor. They and I, alongside some 200 fans, reminisced, and we did not do so quietly.

The technical nature of 80’s heavy and hair metal almost betrays the nonchalance of its own reputation–after all, this is the sweaty, alcoholic sludge that power and melodic death metal crawled out of. You knew punk bands didn’t care because their music was as raw as their message. But Iron Maiden, Yngwie Malmsteen, Ratt–these groups were no strangers to camp, a perspective certainly inherited from hard rock bands that pioneered theatrics and storytelling in their songwriting, and that acted as precursors to pioneers looking to push the limits of color and virtuosity in their music. It would always be difficult for bands to maintain a rebellious edge but still care about how they and their songs were perceived. For groups (like Striker) recreating the style in the modern day, the burden of image is gone–it’s all thrills for these artists. They’re playing a role, one they know is past the height of its cultural relevance but that conjures a reaction nonetheless. This gives them the freedom to embrace the saccharine nature of the music and perform uninhibited by vanity. As a result, the show is not as arresting as seeing someone like Van Halen in the 80s would be–the audience is not possessed by the cultural authority of the performers. Instead, they’re in on the game, drinking in the throwback alongside the onstage musicians and sharing in their homage to heroes who have since grown old and become mortal men.

40 years after this style emerged, authenticity is all but impossible. It’s almost like going to a Shakespeare festival; the wardrobe, language, and artistic style are all part of a period piece, but not all bands are created equal, and the ability to successfully elicit a representation of a certain impression is limited by the talent of its attempters. Striker hits the mark, fully recreating the feelings and tones of their inspiration, but it is not completely dry–their sound is informed by several generations of contemporaries, and there’s a heaviness to their music that can only exist after metal evolved to the extreme. To a young ear, it will sound fresher, more impactful, and less gentil. This isn’t to compare their songwriting to the greats, and it isn’t merely hair metal cosplay–there’s a real appreciation for the music from its creators and they arrived at the venue prepared to demonstrate it.

There isn’t much to say about the concert presentation. This was, all things considered, a small gig, Striker being the first band to play, followed by Seven Kingdoms and Beast in Black. The stage was lit by a few bright lights in basic colors and occasional fog machines. No elaborate light shows, no moving pictures, just five dudes onstage having a blast–and have a blast they did. The musicians of Striker left no doubt that they were enjoying the performance; they headbanged, they laughed, they clasped hands with audience members. Such a concert could not have been seen as dull were it performed at a knitting convention, and if Striker deserves credit for anything, it’s communicating their passion to their audience.

I may be doing an injustice to this group in describing them as a genre act–the performance is not entirely throwback. These are musicians that live in the here and now and understand the context of their work, and how to fashion it with the tools and influences of today. They know how to generate the energy required to power such a high-speed machine. And, like the people that attend their show, they understand the camaraderie that is shared in the presence of heavy music, and in the memory of sounds that brought us up in joy.

Striker’s tour continues through May 13th and their latest single, Strange Love, is available for streaming now.