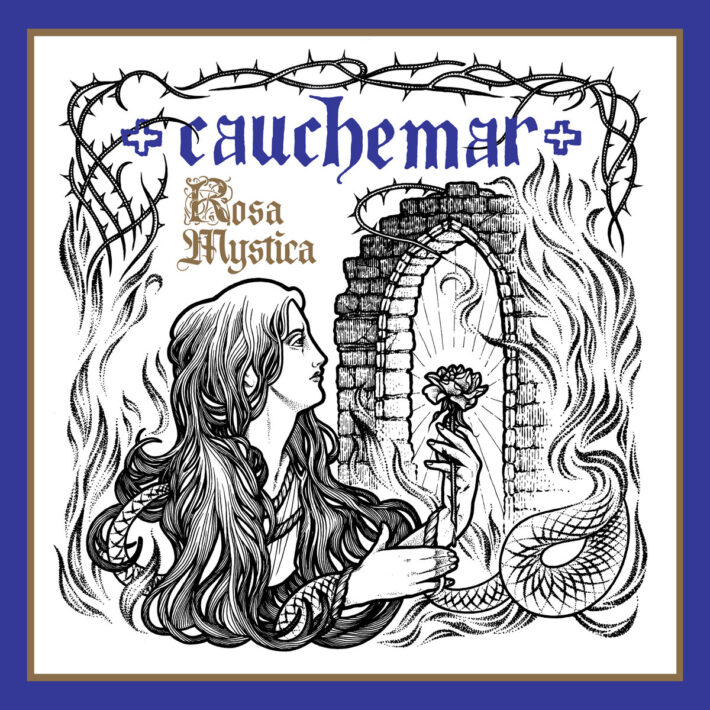 Right of the bat, this one is pretty different for me. Traditional heavy metal is a subgenre far outside my area of expertise, one where I’m only really familiar with a handful of bands. So why am I reviewing a trad record by a cute little Quebecois band? Well, the truth is they have an awesome longsleeve for sale with bats printed on the sleeves, and that caught my eye and made me want to hear the record. Yes I’m serious. But as it happens, there’s plenty to talk about with Cauchemar.

Formed in 2007 by power couple Annick Giroux and François Patry, the band didn’t release their first EP until 2010, and are now unveiling their third full-length, this time on their own Temple of Mystery Records. The band tows the line between heavy metal and doom, frequently alternating between mid-paced heavy metal and slower traditional doom on consecutive songs. Despite that, the record flows really well, and the slower songs don’t seem to drag – they’re able to maintain an element of dark mysticism throughout.

Musically, Cauchemar are very low-key, even compared to most traditional metal. It feels wrong to call it “easy-listening”, but in the literal sense that’s what it is – it’s chill and welcoming, easy to listen to. Truly a great palette-cleanser for when you’re a little tired of constant brutality, and want something laid-back yet groovy and fun. Great riffs on the title track and “La sorcière” are certain to have you swaying, but not too fast of course.

These French Canadians take “traditional metal” to its purest roots. The dual guitars of Judas Priest are a modern invention that Cauchemar scoffs at. François handles guitar duties single-handedly, and the isolated guitar track gives Rosa Mystica a very intimate, DIY feel. Despite being experienced musicians, they opt to ditch fancy production save for some touches of organ, which gives the band a spacious sound and an authentic local-band feeling that can be very hard to nail.

To be completely honest, I didn’t expect to enjoy this as much as I did. This record just has a great feeling of intimacy and authenticity that you don’t get very often anymore. Despite having a DIY feel and a spacious sound it doesn’t feel under-produced (like the last Outre-Tombe record did), it just feels right, like a great rehearsal tape. The French lyrics add so much to the equation too, as I don’t speak a lick of French and as a result the vocals are just another instrument carrying a great melody. I’m seriously hoping this doesn’t pass under people’s radars, because any trad fan will certainly eat this up.