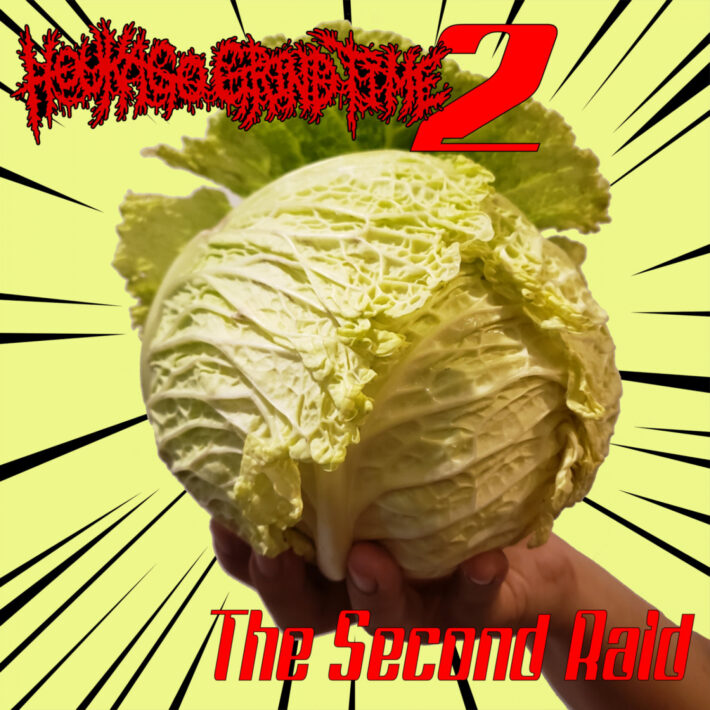 Houkago Grind Time are back. Since 2019, this…anime-based one-man grindcore group by Andrew Lee (of Ripped To Shreds fame) has released 2 demos, 7 split releases, and a full-length. Now he’s back with this correctly-titled second full-length release Houkago Grind Time 2: The Second Raid. This group, outside of the theme, plays grindcore that is exactly what you’d expect to hear from an anime grindcore band. As both grindcore and some corners of the anime world are ridiculous, over the top, and un-serious, so is Houkago Grind Time. In listening to this release, I tried not to take it more seriously than its creator did. Thankfully, Houkago Grind Time 2 contains a lot of fun.

Where the two bands do align is within Andrew Lee’s quality songwriting. While some riffs on Houkago Grind Time 2: The Second Raid don’t stick with me, there are plenty of great ones, such as a particularly noticeable passage in the middle of “Moe Again”. The rest of the songwriting is exactly what it needs to be. The songs feel varied in their approach to aggression. The actually-enjoyable squeals on “Rum Raisin Daisuki” is an example of Andrew Lee effectively using every trick he feels like.

Another example of this is the various samples throughout Houkago Grind Time 2: The Second Raid. These various samples, including a ProZD clip at the beginning of “You Are My Nakama (Bonds Stronger than Friendship)” that I will never ever admit to being online enough to find funny, either are effective or are short enough that I find them inoffensive. These sound like the type of samples that would usually stick in the listening experience like sand in my eye. Again, though, I didn’t take this record more seriously than its creator did. No sample harmed the listening experience, no matter how often I listened to this release.

While I don’t need Houkago Grind Time to be serious, I do need the album to stay interesting throughout. Sometimes these songs just feel like they’re filling space, which is a problem for a record that’s less than 20 minutes total. On “Moe Again,” the previously-mentioned excellent riff is followed by a more mid-tempo second that doesn’t go anywhere or do anything. It sounds as though the band had some great ideas but no idea how to sustain them, so they decided to not bother trying.

Some of the riffs on the later tracks feel borrowed from earlier tracks. Again, sub-twenty minute album. Again, side project that may not be a fully-serious endeavor from a band with a saturated release schedule. While this record’s flaws are understandable, that doesn’t make them matter less. While Houkago Grind Time shows flashes of musical brilliance, it surrounds those flashes with dregs.

Houkago Grind Time 2: The Second Raid is a fine record, but one that reaches that level through higher highs and lower lows than usual. Despite my misgivings above, the record is brief enough and entertaining enough that I never felt disappointed to listen to Houkago Grind Time. I recommend this to grindcore fans who lament that the genre has gotten too full of itself, Ripped To Shreds fans who are looking for more from Andrew Lee, and anime fans who need something to listen to as they go outside for the first time. I certainly had a fun time here.