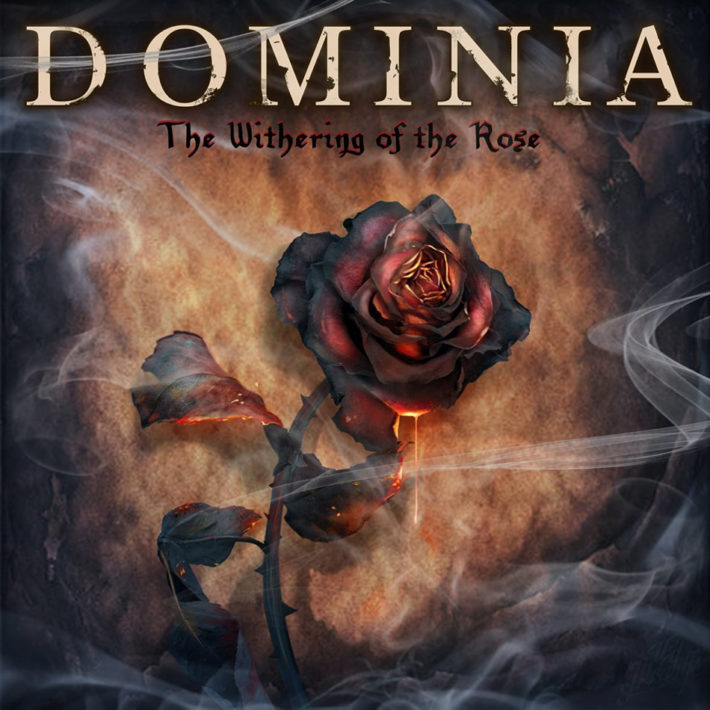 Melodic death metal is an interesting subgenre. Under the same label you can find very different bands, each and everyone with a different artistic perspective, and very different influences, which often results in a great variety of music… all under the same roof. A quick exemple is that both At The Gates and Amon Amarth are considered melodic death metal, yet they are nothing alike. Personally, I think that few others subgenres can have such level of inner heterogeneity. This particular quality is one of the reasons I like melodeath: a band could have one foot here, and another foot in a completely different genre.

Domina, with this album in particular, is an example of this kind of bands: since the first listening, the main impression is that of a work in between melodeath and gothic; think Dark Tranquillity, but slower, and perhaps a bit less harsh. And with a violinist!
This intent of blending genres and moods is without a doubt one of the striking points of the album; we have mournful atmospheres and almost distraught backgrounds, accompanied by classical interludes, and they all concur in the creation of powerful feelings during our listening experience.

The Withering Of The Rose starts off with the long and melancholic “I Want To Forget”, where we can already appreciate the previously-mentioned violin. It then goes on with pretty solid songs, including “Suprema”, the single, adding heavier melodies and growls.
The climax of the album is certainly in the middle, with “Entombed In Grief” and “The Elephant Man”, the latter of which features an impressive violin bridge, and a captivating clean-sung chorus.
The second half of this full-lenght starts again with a somber-yet-frantic tone that is kept until the end; a bonus mention must go to “The Night And The Dark Room” (the last song before the bonus track, “The Song That You Don’t Like”), that ends with a marvelous church organ outro.

Overall, I’d describe this album as emotional.
If I had to make a similitude, I’d say that listening to this album is like being secluded in my home, watching a storm outside, by the window, with sometimes thunders and lightning, other times just the sound of the rain falling from the sky

So, what kind of album is The Withering Of The Rose? Well; it’s a good album. Not a great one, but a good one.
Why?

I think that in the end, all things considered, it’s pleasant to listen to, but it doesn’t really last. Only a couple of songs leave a persisting impression unto the mind of the listener, while the others just kind of come and go, and they go… they go nowhere; it is an album that makes for a great soundtrack, but that’s that.
It doesn’t really lack in anything, it just feels like there could be more; maybe the only thing that’s missing is something to make this album stand out. Because it is a good album, but like many more out there. At the end of the day it feels a bit insignificant; it does encourage you to look out for more by the same band, but really because you want to know if they did any better – since the potential is clearly right there. And I really want to underline this point, because in no way we’re talking about a bad album, it’s just that confronted with previous Dominia works, it is perhaps more emotional, but less interesting. It’s an album that doesn’t distinguish itself.

Do I recommend it? Yeah. As I said, there are one or two songs that actually need to be checked out; even the album as whole, it’s still worth to give it a listen after all. Put it in the background, while you study or work. It is surely pleasant to your ear, but this rose will fully wither without leaving a durable mark.