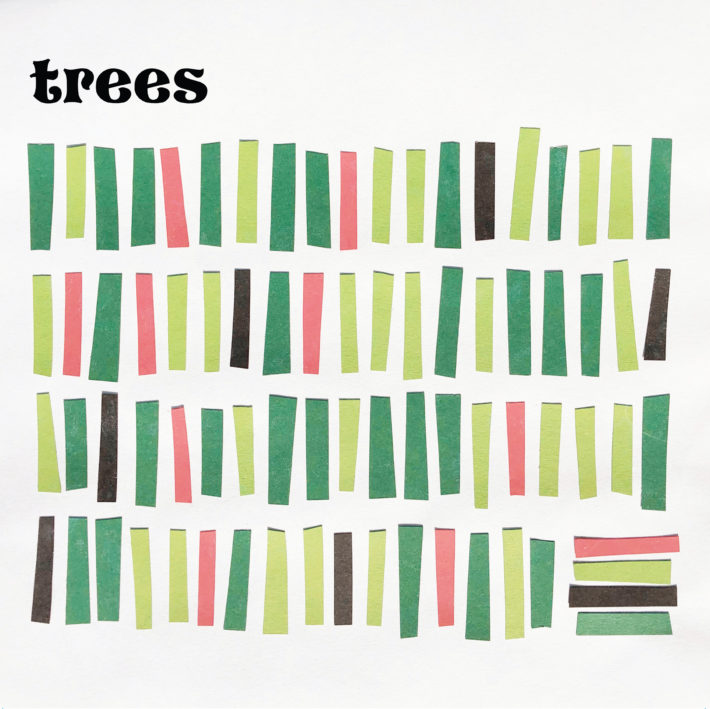 When I was looking through Svart Records’ releases and came across the band Trees, I was immediately intrigued. I thought to myself that if a band’s name is Trees, it’s got to be cool. And after listening to Out In The Open, the single they had already released, this assumption was confirmed. The thing that surprised me, though, was the fact that in contrast to the distorted, aggressive music that I was used to reviewing, it was peaceful, beautiful folk music. And that from a record label that usually releases metal albums. After listening to the whole album, though, I understood why the label decided to release Trees‘ self-titled record.

First of all, every song has a different feel, from sweet and happy to downright depressive, and everything in between. Even so, all of them have the same kind of melancholic ring to them. This makes it a perfect album for the metalhead who is in the mood for some relaxing music. The songs are generally very simple, but this doesn’t mean the music lacks quality. It’s a beautiful experience where every song creates a new scenery for the listener to explore and get lost in over and over again.

The softness of the music makes it so that the bass and the vocals have prominent roles. I always like it when the bass doesn’t get drowned out by the guitar, and on this record, the instrument really has a presence of its own. In almost every song, a walking bass line can be heard that leads the listener through the scenery of the music, laying the foundation for the rest of the band to build upon. The vocals are also really interesting, their sound is quite diverse. While on Lovers, the vocals are quite confident, on other songs, like Wherever You May Be, the voice sounds really frail, which is in line with the lyrical theme of the song. There’s also one song on which they put an effect on the voice. On Like A Tombstone, the only song on the album whose sound is a bit distorted, the vocals sound a bit fuzzy. One characteristic of the vocals in general is the fact that they sometimes are a bit off. This doesn’t suggest a lack in skill, though. On the contrary, it makes the music even more emotional and personal than it already is!

Apart from the bass and vocals, the band uses a whole range of instruments on their debut record. From strings that make the music more dramatic to a harmonica that creates a more blues-like sound to a flute that doubles the harmonica voice, the variety in instruments is impressive. Of course, there’s also a guitar that has more of a solo role than a rhythm guitar that simply plays the chords, which, once again, proves the band’s ability to combine many elements into one coherent whole.

Two songs I’d like to point out in particular are Waltz and Out In The Open. The first one deserves to be mentioned separately because of its interesting structure. It starts with just the percussion on top of which a voice sings a simple melody. After a while, a second voice joins in and the two voices continue with a call and response form. A while later, the bass plays a melody that creates harmonies with the two voices and about halfway through the song, the whole band joins to play a melancholic waltz. The way the song is built up makes it really worth mentioning because it proves the band’s musical knowledge and feeling. The next song on the album is Out In The Open, which is also the first single the band released. It’s got an Into the Wild-feel to it and is a good representation for the rest of the album, for it creates a beautiful atmosphere and immediately invites the listener into an open scenery.

In conclusion, Trees is a beautiful record that, through its simplicity, creates beautiful sceneries. Every song’s got a different feel to it, but all of them have this melancholic foundation. There’s a large variety of instruments, all of which play a different role in the music, making it one coherent whole. Highly recommended for anyone who’s feeling like listening to some relaxing, yet interesting music!