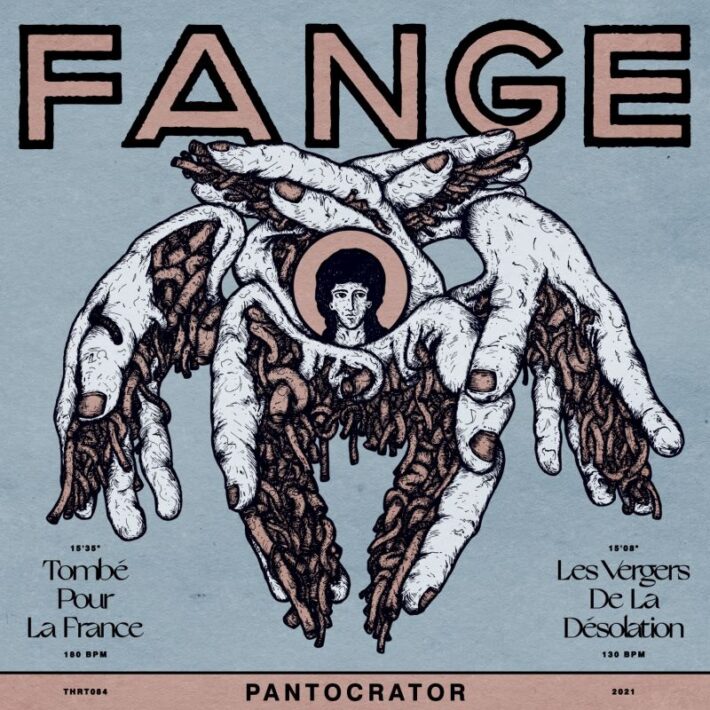 Fange is a relatively recent band, founded in 2013. Despite this, up to today they released six full lengths, two EPs and one Split. During this remarkably short period for such output, Fange continually evolved their sound from a somewhat standard crusty sludge style towards the magnificent beast that is Pantocrator. Even though they have an insatiable drive and iron work ethic, early on they determined what kind of music they want to make – uncompromisingly heavy, harsh and crushing sludge metal, which they continually got better at and invented new ways to express it.

We can provisionally split Fange’s output into two phases. The first one consisted of their first four albums, from 2014’s Poisse to 2019’s Punir. What started as simple sludge slowly built towards its climax on Punir, presenting a band that mastered their style. This was not only due to superb production – immaculately heavy yet not overly muddy, in fact poignantly emphasizing the punchy rhythm they were going for, almost more fitting for death metal than sludge. This leads to another development Fange went through – you could now hear the plethora of metal styles they employed towards their visceral brand of sludge. There was plenty of death metal, doom metal, crust punk, hardcore, and perhaps most importantly, industrial riffs to be found which were all very well integrated into the whole. It was by no means accessible and easy listening, but it was top notch craft.

The second phase of Fange consists of their last three releases – 2020’s Pudeur and Poigne EP and this year’s Pantocrator. Fange already proved that they were never complacent and the momentum towards continual evolution reached a new plateau. They ditched a human drummer and went full-on industrial machine percussion, matched with a plethora of noisy effects which were nascent on Punir but fully utilized on Pudeur, an album which I’d describe as a riff-happy death metal Godflesh with ungodly loud production. And it was superb. The Poigne EP released a few months later went a step further, veering into death industrial territory and shedding the riffage in favor of heavy drones buried under industrial hellscapes.

And here we come to their latest release, Pantocrator. I’d maybe compare it to Punir as a sort of culmination of Fange’s second, industrial phase. But in a way the comparison isn’t quite apt because Punir refined what preceded it, whereas Pantocrator takes a step further. It not only uses everything Fange learned so far – the varied and expert riffage, the overbearing production and industrial machinations, and seamlessly intertwines them, it also adds much more.

The first thing you’ll notice is the song format – two 15-minute songs, instead of plenty shorter ones Fange was doing previously. In my opinion this works in favor of the band, because while they probably could be separated into smaller movements and thus into shorter songs, here they’re seamlessly joined in a way that’ll grip the listeners attention throughout. This is especially beneficial as, like I said, Fange isn’t exactly easy listening. The second thing you’ll notice is after the absolutely crushing introduction to the first song, “Tombé Pour La France”, you’re greeted with something you haven’t heard with Fange before. Is that… melody I hear? The tempo slows down, a melodic riff plays and instead of the usually raspy snarl, we hear post-hardcore-esque shouts. Don’t be fooled though, they haven’t gone soft, as their oppressive atmosphere is still present, albeit interpreted in a new way. This bit is soon interspersed with crushing riffage and slowly built up as the industrial noise intensifies.

The rest of the song proceeds in a similar manner, knowing when to crush it, when to slow down, when to let the electronics and when to let the riffs speak, when to be mercilessly brutal and when to add some emotion, filled with plenty of details you’ll discover on subsequent listens. The intricate composition and addition of melodies launches Fange somewhat into post-metal territory, whereas they were previously a bit too harsh for that label. Nevertheless, it’s not just sonic similarity but also the songwriting quality, one which separates post-metal greats from their copycats, and Fange can certainly spar with the best.

The second song, “Les Vergers De La Désolation”, further leans into Fange’s stylistic innovations, laying bare all imported the post-punk and noise-rock influences (genres which were always adjacent to industrial anyway). The listener can once again appreciate the band’s honed industrial proficiency, not just being a background layer of noise and effects, but a fully integrated layer which elevates the whole sonic texture to a new level. This aint amateur hour. Perhaps a bit more moody melodic bits than the last song, Fange becomes a tad more accessible while still not compromising their overall vision.

To conclude, Pantocrator proves their hard work paid off in droves. This isn’t just a mature band, it’s a twice matured band – mastering two different styles and now effortlessly combining them. If this isn’t their best record yet (and I’ll gladly admit that it is), it’s certainly their most diverse, featuring not only all the best stuff they did in the past but some entirely new ones executed just as well. Sludge and post-metal might not quite be in their heyday regarding overall popularity and innovation (at least compared to some other metal subgenres), but there are still a couple of bands not only keeping it alive with quality releases but also pushing the envelope. Fange easily does both, and I’m kind of surprised they’re not more popular. They easily keep pace with, say, Rorcal, Amenra, Thou, Sumac, Primitive Man on the sludge side, but also Lingua Ignota, Gnaw Their Tongues, Prurient, The Body on the industrial side. In any case, a record you should not sleep on if you’re into harsh industrial / sludge.