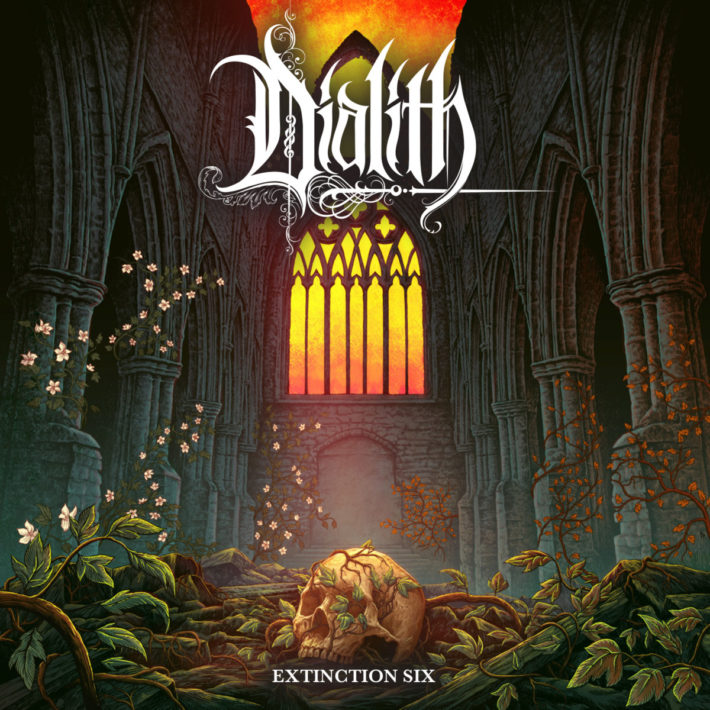 In case you missed my review of the new Ancient Bards’ release earlier this year, or just missed some obvious hints, I love symphonic metal.  It was one of the key subgenres that opened the door to the ever-expanding world of metal for me, and continues to serve as a gateway for those who are unfamiliar with it.  However, when in between releases from established titans, such as Nightwish or Epica, the underground bands that attempt to fill the void tend to be lacking.  Unlike other subgenres, like black metal, quality production is more essential to a good album. Low-budget symphonic metal productions fail to capture the attention of any listener if they are too distracted by the orchestra-stand-in keys that sound uglier than Garage Band samples.  Similarly, up-and-coming acts tend to be so cheesy with their lyrics and orchestrations that even DragonForce fans cringe slightly (no offense to the band or their fans;I love them too).

Dialith and their debut album, Extinction Six seem to dodge almost every one of these setbacks that afflict young symphonic bands.  With a better-than-average production, quality songwriting, and superb musicianship, this band is likely to stand out amongst others.

As with most symphonic albums, this one starts with an orchestral intro.  Nothing really notable here, it checks all the boxes that are typically associated with the genre; about two minutes in length, grows from quiet to climatic end, and leads right into track two.  This second track, “The Sound of Your Voice” is where the album really starts.  Kicking off with a fast and heavy guitar riff, it then launches into an extended instrumental section, not only introducing the atmosphere of the song, but also taking the time to let the guitars and drums breathe.  The vocals don’t come in until nearly two minutes in, yet it feels natural.  Everything about this song is damn near perfect, with soaring choruses contrasted with a thrashing verse, and the orchestra supporting it all in the background.

The next couple of tracks are pleasant, but not quite as notable as the predecessor.  Krista Sion’s voice sounds uncannily like Kobra Paige from Kobra and The Lotus in “Where Fire Dwells” (and actually in several places throughout the album).  In “Libra”, the band flexes their proggressive muscles by throwing in a Spanish-influenced acoustic guitar section that subtly transitions into what could only be described as a melodic-disco section? (Just go listen to it and let me know what you think).  It then flows smoothly back into the chorus, never feeling out of place.  Many bands can’t pull this off, so it  is a testament to the skill this band has.

Of course, Dialith shows their influences throughout the album.  Songs like “Break The Chains” and “In Every Breath” could very easily have been B-sides from Wishmaster-era Nightwish.  The opening guitar solo from “The Sound of Your Voice” and the unusual time signatures at the beginning of “Quiver of Deception” are somewhat reminiscent of Dream Theater, which makes me love this band even more.

One thing to note with this band, is the fact that they don’t abuse the orchestral aspect of their sound.  It’s easy to get lost in complex arrangements and rely on them to make a poorly written song sound better, often leading to an overwhelming mess of strings and choirs.  Listening to this record, Dialith appears to wrote the songs first, and then added the orchestral elements.  Each song feels complete, never stretching beyond its horizon in a way that feels uncomfortable.  When the orchestra is included, it only ever serves to enhance the incredible songs.  If the orchestral parts were stripped away, you would still be left with a great song and album, which cannot be said for everyone (including those not within the symphonic realm).

One of the very few complaints I have about this album concerns the last track, “Extinction Six.”  While I enjoy lengthy songs (hell, Mirror Reaper by Bell Witch is one of my all-time favorite pieces of music), this one felt like it dragged on for too long.  Dialith tried to stretch their wings a little too far and faltered.  It would have been improved if the end section was a separate song on its own.  This band has the capability for writing amazing long songs, but it’ll just take a little more practice.

The only other critique I have is that I wanted more heavy songs, like “The Sound of Your Voice.”  This whole album is full of amazing melodies and flowing choruses, and a contrasting style would help give it more of a diverse feeling.  I actually appreciate the lack of the “Beauty and Beast” vocal approach, which has been overdone.  Instead, if Dialith can capitalize on more of their thrash influences, as was ever so briefly hinted at in this album, and layer it under their expert use of melody, it will only help further their sound and style.

At the end of the day, this was one hell of an album.  I kept playing it over and over again, never feeling like I was forced to.  With this album, Dialith prove that they are capable composers and songwriters.  I genuinely look forward to hearing more material from them in the future.