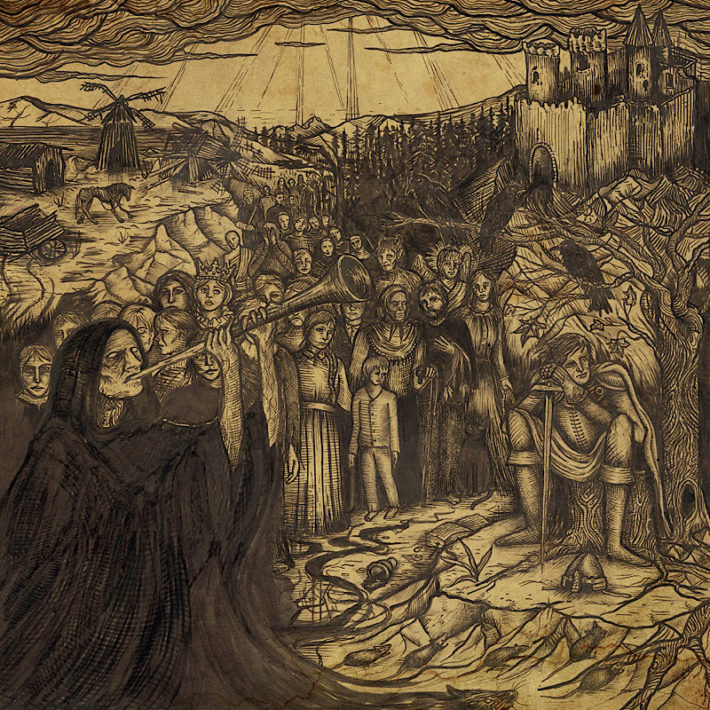 I have always envisioned black metal as the hard drugs of music, no one really starts their journey there.  Through years of abusing their ears, listeners may eventually build up their tolerance to heavy music and in an unending search for something harder, faster and nastier wind up listening to black metal, often wondering how the hell they got there.  Ordinance has opened the side door to the genre and is sneaking people in.  Those whose tastes lie from outside, are smuggled in to have a look around and familiarize themselves.  In Purge There is No Remission is the perfect tour guide for someone looking to get their feet wet with black metal.  There should be a sticker on the album cover that says “the first one’s free, you’ll be back.”

Ordinance’s second full length album In Purge There is No Remission, builds upon and rides the tracks laid down by their debut album.  Although this album is still finding its main inspirations and artistic direction from black metal trademarks including blast beats, disgorging vocals and cacophonous guitar tremolos, it does break the shackles of convention.  It offers a more dimensional sound than that which is often presented by its peers.

First thing that is apparent is the production quality of the album.  It sounds great- far away from the scratched, molded over, lo-fi, basement recordings of the early Norwegian scene.  Ordinance still reaches for fuzz and distortion, but they chose to employ it with surgical precision, not slather it across the entire audio spectrum of the album.  They also cleverly deploy many tactics from other genres such as the occasional clean acoustic guitar, slower underlying groove metal rhythms, and a methodical stadium rock kick drum.  Although these ingredients are subtle, it creates complexity and diversity.  The use of these different elements meet the listener halfway and mix well with the use of black.

The vocalist does a convincing job of belching and gurgling out lyrics with enough acidity to give the music a harsh uneasiness augmented by the demonic.  There are small seasonings of more traditional cold, grim, tight throated ghoulish vocals, even an occasional banshee shriek, but they are few and far between.  These nods to previous generations of the black metal vocals serve more as background and support.

Experienced fans of the genre will find familiar footing on the albums opening track “Obstructed Paths”.  The song starts with feedback and creepy spider tinglings to create the atmosphere.  Then, like Belloq opening the Ark of the Covenant, the scary stuff jumps out to melt your face.  Quick pounding blast beats, relentless cyclical tin guitars and bile encrusted vocals whirl and churn into a soul devouring feeding frenzy.  It does however, allow plenty of room for the bass guitar to work, as it falls back about halfway through the song into chugging guitars.  Ordinance gives the song enough variety through tempo changes to keep things interesting and allows the more lyrical moments to augment the aggressive and extreme.

“Gathering Wraiths” not only makes use of the compulsory bleak and thin guitars, it also uses a much cleaner, robust “traditional heavy metal” guitar sound to offset the darkness and add some rhythm and beef to the song.  To further supplement Ordinance’s desire for cadence and pace they break to let the bass guitar come to the forefront and hit the beat home while a squeaky-hinge rhythm guitar breaks it up and then invites it back into the fold.  The drummer has his way with this song as he tricks and traps around the kit with cymbals that cleverly keep you guessing.

Around the five minute mark of “Gathering Wraiths” the song seems to get a bit out of time and the band doesn’t quite sync up seamlessly.  I’m not sure if it was intentional or not, but they pull it back together about a minute later.  Whether a happy accident or a stroke of inspiration, the stretch of disjointed timing and execution does give a feeling of unsettling discomfort.

The term “black” makes sense as an adjective to describe much of this scene: simple, stripped down, binary, on/off.  This album needs more descriptors than that.  It has many more qualities than just color that need to be taken note of and admired.  Perhaps “obsidian” as opposed to “black” is a better term to pinpoint Ordinance’s sound.  They have a smooth polished sound that is translucent enough to hear other types and styles of music but all tinted through its blackened veil; yet somehow still rock hard and sharp.  If I were asked “is this album black metal?” I would say, “it’s so much more”.

If there has ever been anything spun into existence that could be called “black metal” and still be inviting and welcoming,  Ordinance has found it with  In Purge There is No Remission.  They have successfully used the many well defined characteristics of the genre and added bits and pieces from others to make their own hybrid sound.   Fans of other sub genres of metal looking to gain access to the black metal mausoleum will find it here.  Long term, hardcore, purists of the genre may be dismissive and find fault with the albums dynamic, modernistic approach, but what do they know.