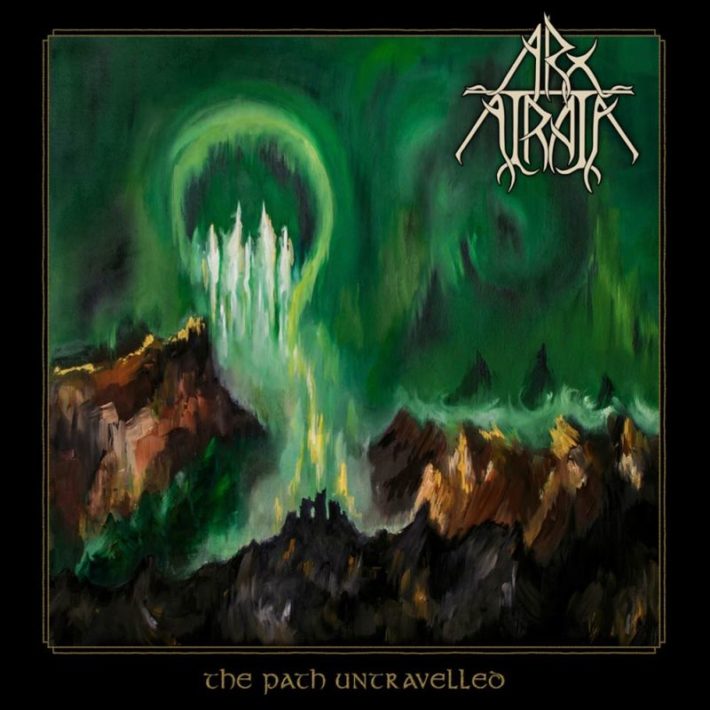 Atmospheric black metal is a genre that is rife with problems. It is a genre that sounds easier than other, somewhat more technical genres, so a lot more people try to create interesting atmospheric music. Unfortunately a lot of them fail. Arx Atrata, a one-man band by Ben Sizer, is onto their third release: The Path Untravelled. Mr. Sizer manages to avoid a lot of typical problems of the genre, but unfortunately falls short of creating a standout record.

Before we get to those, though, The Path Untravelled does a lot well. In any individual song here, the melodies remain interesting throughout. In the hands of an inexperienced artist, atmospheric metal can sometimes sacrifice too much for the sake of ambience, and end up hurting the feeling of that ambience in the process of doing so. Most of the time, the supporting music is not enough to carry the songs. This is never an issue on The Path Untravelled. I’m not sure if Arx Atrata didn’t feel comfortable going without strong melodies or if they were purposefully putting the melodic elements of their music front and center, but either way the result works and helps to keep things listenable.

The atmosphere mostly works well. The promo material goes on about a “perfect moment of understanding…The sheer splendour of the earth, the power of the elements, reduce humankind to insignificance, yet simultaneously you are bound to this power, a part of this grandeur. Behind you the forest fills the valley, a living entity full of secrets and the world is suddenly full of possibilities and stories yet unwritten, paths as yet untravelled.” Mr. Sizer does manage to bring this idea across. Impressively, he manages to avoid an over-reliance of musical tropes while doing so. The Path Untravelled set out to paint a specific picture and succeeded wildly in doing so.

Ben repeats a trick throughout the album to keep the pace going. He will introduce a relatively simple melody, repeat it, then use it as an ostinato as one or two parts of the background change. This change may be as simple as a change in chord or a change in the drumbeat, but it allows Mr. Sizer to keep the melodies simple and therefore memorable while still being musically engaging. This isn’t a unique musical technique at all, but it’s one used frequently and prominently throughout the album, and it does its job well enough to be worth mentioning. None of the individual songs ever seem to stagnate, even as the feeling of a vast, explore-able landscape is kept throughout the song.

If you are Ben Sizer’s mother, stop reading now. This is where the good points end. So far, I’ve purposefully only talked about individual songs, and not about the album as a whole This is a massive, massive album that lasts way too long. Each song by itself is fine, but they just keep piling on. If you just went to the bottom to look at the album length and are now confused, keep in mind that this is all relative. I’ve enjoyed significantly longer albums in the past. There’s nothing wrong with a band having a long album, if the music needs the length to reach its full potential. On The Path Untravelled, any individual song could have been cut and it wouldn’t even be noticeable.

This problem isn’t helped by all of the songs sounding too similar to each other. The atmosphere and sound are cohesive throughout the album, but blending the songs together is a hell of a price to pay for that. The melodies all sound nice, but they all sound nice in the same way. What works in the second song is actually aggravating by the time you get to the last song.

Speaking of which, let’s talk about those ostinatos again. They just keep happening. In the same exact form every time. Multiple times per song. This breaks the atmosphere in half. Instead of listening in wonder at the sonic landscape that Arx Atrata has painted, the listener is predicting what will happen next, and ending up right more often than not. Mr. Sizer found a neat trick that works well. And then he bludgeons it to death by the fourth track. And then the trick’s corpse does a jig. This album is far too reliant on composition to be this formulaic. This repetition is one of the culprits in the album seeming longer than it is; every song has a similar structure, so they all drift together, so the album just seems to ramble.

The black metal vocals just don’t work. It seems that Arx Atrata was trying to have them be a part of the background some of the time, but because they are a human voice they stick out like a bright pink mountain in the back of a snowy photo. They’re nice enough, they just don’t fit the sound. The background chants fit well enough.

This is an unfortunate misstep. The parts of the music that work well are not unique to The Path Untravelled, and the parts that don’t work are not easy to gloss over or ignore. I guess this is fine atmospheric black metal if that’s what you’re looking for, but with recent releases by Ashbringer, Yellow Eyes, and Blut Aus Nord that outmatch this, there’s not a lot of incentives to check out The Path Untravelled.