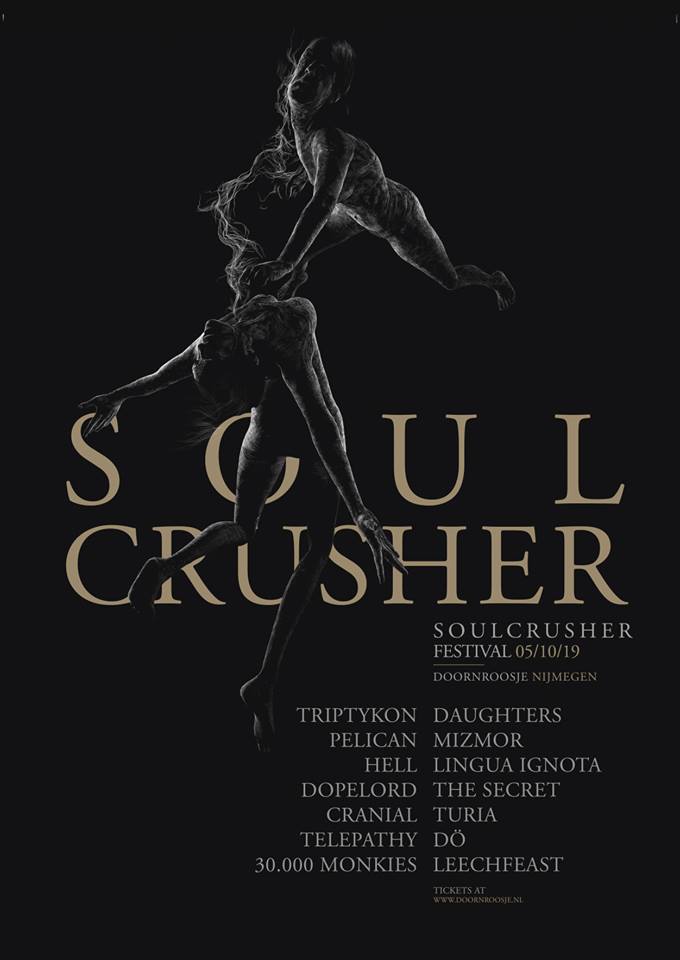 Last Saturday, October 5th, I had the opportunity to visit Soulcrusher Festival, a black/doom/drone metal festival at Doornroosje, a venue in Nijmegen, The Netherlands. The festival had a great line-up, with bands like Triptykon, Daughters and Pelican, among many others. Thanks to RarelyUnable, I was able to visit this awesome festival and write a review about the bands that played that day.

The band that kicked off the festival was Leechfeast, a doom band from the same town where the festival was held. They quietly entered the stage, without too many people noticing, and at once, they started playing their explosively loud music. The large hall in which they played wasn’t too crowded, but they immediately had everyone’s attention. And man, they gave it their all, moving around on stage and headbanging to their intensely slow music. The guitarist also had a synth on which he produced uncomfortably dissonant sound effects. The vocalist let out long screams as well as demonic laughs. The music also had atmospheric elements, and they even had a saxophone. In short, Leechfeast put on a great show that set the mood for the rest of the festival really well.

The next band, called 30.000 Monkies, played in the smaller hall, so the place was pretty crowded from the start of the performance. The band was called 30.000 Monkies, a Belgian band that classifies itself as noiserock. The band had the appearance of a kind of garage rock/punk band, with long, uncut guitar strings and duct-taped guitars. This image didn’t really clash with the music, because it definitely had some punk influences. Even so, apart from the fast parts, the music also contained slower, more doomy parts, making for a really diverse performance. There were interludes with really funky effects on guitar and synth, and the music even contained proggy influences, seeing that almost every song had odd time signatures. The cool thing was that the band really made it work with so many different influences, and they transferred their energy to the crowd without difficulty.

Compared to 30.000 Monkies, Telepathy was a bit more straightforward. Now don’t get me wrong, it’s not a negative comment, but with Telepathy it was obvious that they made sludge. The UK band labels itself as ‘cinematic sludge metal,’ which is something that came across really well in their performance. They started playing heavy, slow sludge parts, but there were also many calmer interludes. These captivated the audience in a kind of trance before awakening them again with faster and more intense music. The hall was pretty full, the people in the front were moving along really intensely to the music, and the rest of the crowd was more calmly headbanging along. You could see the band members were really feeling the music, which made the performance even more enjoyable.

Back in the small hall again, it was up to DÖ to give the next performance. The Finnish Döömer metal band (the band created their own genre ;P) tried to set the mood with three candles on stage, and even though that might not have been too effective, the singer’s charisma definitely helped winning over the audience. In between songs, he lightly announced that they’d play their new album in full, and the whole band really went for it, making it a very fun show. The music was heavy as hell, with intense drums, heavy guitars, screeching grunts, and guttural growls. Each band member was really skilled with their instrument. For instance, when the singer/bassist used a Wah-effect, it was one of the few times I’d seen it being used well during a concert.

The following band, Pelican, is an instrumental post-metal band from the United States. They played in the large hall, and there was quite a lot of people. The band was intense from the start of their performance, really going at it on their guitars. The crowd went along pretty nicely, you could see who were the real fans, standing in the front and moving along with every note they played, but the rest of the audience also seemed to be really enjoying the show, headbanging along to the music. Not only the guitars, but also the drums were impressive. With a lot of drum fills within the relatively slow drum beat, they really kept it interesting.

Cranial was the next band on the schedule. The sludge metal band from Germany played in the small hall, making it pretty crowded from the start of their performance. What struck me was the responsiveness of the crowd. As soon as the band started playing, the crowd started moving a lot, probably because of the grooviness of the band. The singer’s deep, guttural grunts were impressive and the whole band played really intensely. The band members didn’t really move around a lot on stage, but the movement in the crowd proved that their music was really energetic. It was definitely a show worth seeing.

The US-based black/doom metal band Mizmor was one of the bigger names of the festival. The band is actually a solo project by a man known as A.L.N., but on stage, he brought three musicians along with him. What really struck me was how heavy the band is, live. The music is already heavy on CD, but live, it was even heavier. The music was slow as hell, but each note they played was so intense, that it could have lasted minutes without anyone noticing. And A.L.N.’s vocals were so versatile, he let out deep growls, as well as agonizing high-pitched screams. The audience seemed to be captivated by the band, headbanging along with the overwhelming music. What an experience.

Lingua Ignota was definitely one of the more remarkable acts of the festival. After being announced as one of the first artists to be playing at Soulcrusher, she has since released another full-length record, and she’s been announced as one of the artists in residence for Roadburn 2020. Even so, she played in the small hall, and the first thing that caught the eye was a small white, plastic curtain that was in front of the stage. Instead of performing on stage, Kristin Hayter chose to play in front of the stage. She stepped from behind the curtain, climbed down the stage, and sat down in front of her piano, starting to sing her heart out. Later, she climbed behind the white curtain, and played around with the light and shadow. Her voice really expressed her pain, she started singing quietly, but it rapidly got more and more intense, until she was screaming out her lungs and was actually crying up there, on stage. About halfway through the performance, she tied a lamp around her neck and walked into the crowd, making the physical distance between her and the audience even smaller, and with that, also lessen the emotional distance. It was a concert that I won’t be forgetting soon.

As if Lingua Ignota wasn’t emotional enough, her performance was followed up by Daughters, from the United States. The band entered the stage and really had an early Nick Cave and the Bad Seeds vibe. Alexis, the band’s front man, was wearing a suit and the band really had a punk-vibe on stage. On CD, the music sounds almost claustrophobic, but live, it’s as if all that pent-up aggression got released in an explosion of energy. And that aggression definitely got out. Alexis abused his microphone, smashing it on his leg and on the speakers, swinging it around, tying it around his neck and spitting on it, at the end he must have gone through three mics. But his mic wasn’t the only thing that was suffering, he also let out quite some anger on himself. He already started the concert with a wound on his head, but he was also crying at times, scratching his chest vigorously, lying on the floor as if he had a breakdown and at the end he was screaming so loud that he nearly threw up. This was definitely one of the most overwhelming performances I’ve ever seen.

Still emotionally recuperating from Daughters, I went to The Secret in the small hall. Unfortunately, the hall was so full, that I couldn’t even enter. However, from just outside the doorway, I could hear it well. It sounded like some really good black metal. What I did see was that the band was moving a lot on stage, really being one with the music. Even though a large portion of the bands on the festival were doom metal bands, this band wasn’t out of place. Instead, it was one of the best visited bands of the day. They really put on a great show.

After The Secret, it was time for the festival’s headliner, Triptykon. Surprisingly, it wasn’t too crowded at the show. Of course, it was in the large hall, so it’s obvious that it wasn’t as full as the small one, but still, there were less people than I had expected. The crowd was really dedicated though, there were many people up front, going along with the music. They played classics from Triptykon, but also from Tom Warrior’s older bands, Celtic Frost and Hellhammer. Warrior really made contact with the audience, asking if they had song requests and telling them how happy he was that everyone came to listen to the band. You could see the band having fun on stage, often standing in front of one another so as to really play together. Where Daughters was intensely sad, this performance was really fun.

The next band, Turia, is an atmospheric black metal band from the Netherlands who played at Roadburn earlier this year. Upon entering the hall, there was a piercing smell of incense, immediately making for a spiritual atmosphere. It was kind of crowded, so I couldn’t get too far up front, but I could see there were candles and goat skulls on stage. The band played very good black metal. They were a bit static on stage, but it did kind of fit the music. It was a solid performance.

Next up was Hell, a sludge/doom band from the United States. Like Mizmor, the band’s actually a solo project by a guy named M.S.W. and they are actually in each other’s live line-ups. At first, the band seemed to play faster than on the studio albums, but later, it seemed like they started to play slower and heavier. The music was heavy as hell, really impressing the crowd. Because the band played at a later time, after the headliner, there were already quite some people who had already left, but the people that were present really seemed to be captivated by Hell’s performance.

…And last but not least, it was Dopelord’s turn. The incense from Turia’s performance was still very present, but with a band called Dopelord, that couldn’t have been a problem ;P. The thing that struck me was the fact that the guitar on its own was already very heavy, but with the bass joining, it was even heavier and louder. The band might have been the last band, but they definitely weren’t preparing the audience to go to sleep. Instead, they played groovy, loud music, making for an explosive ending to the festival.