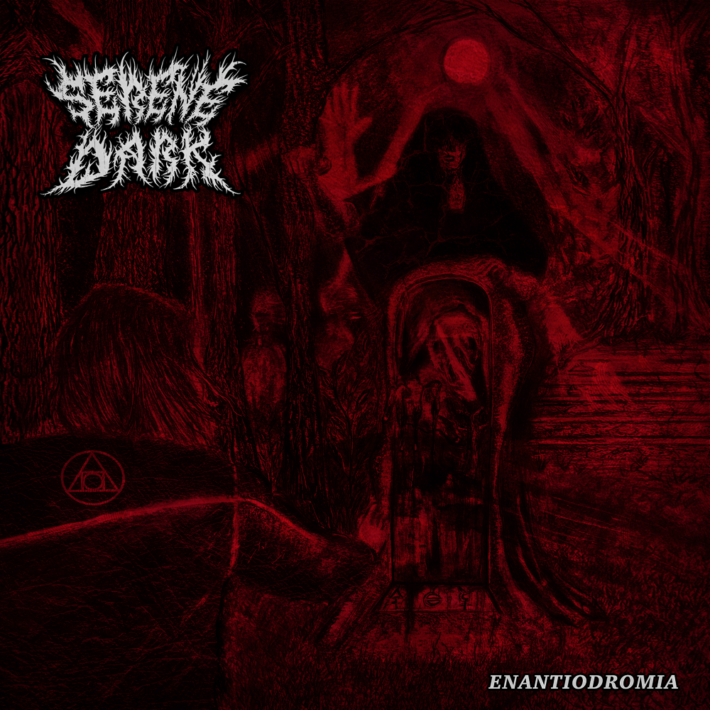 What music is worth your time? There are dozens of albums coming out each week, and nowhere near enough time to listen to all of them. Choices must be made. Some people devour new albums whole, while always being on the search for the next new sound that they can find. Others have a more carefully curated listening experience, trying to ensure that only the best possible listening experience crosses their ears. Where you fall on that spectrum will determine how you feel about Enantiodromia.

Enantiodromia is Serene Dark’s debut album, although it seems like cheating to frame it that way because the members of the group have played together for a long time under a different name. They take a kitchen sink blackened death metal approach, with a heavy emphasis on the blackened part to the point that this feels more at home in black metal circles than it does in anything death metal related. The album opens with a quote by doctor Carl Jung about how humanity is the real evil in the world. The band explore this concept extensively in the lyrics, and if that’s your thing then this release will be good news for you.

Serene Dark provides a fun and clear example on how metal musicians can use repetition to their advantage. Throughout most of their tracks, they will take a motif, sometimes simple and sometimes complex, and hammer it out over and over again while the rest of the song shifts around it. This changing context makes their motifs sound interesting even when you’ve been hearing the same four notes repeated for the last five minutes.

It also helps that the motifs and riffs themselves are generally interesting. Some are better than others, but the weaker ones are still at least serviceable. The riffs occasionally sound more melancholic and melodic than I’m used to in black metal that doesn’t advertise itself as melodic, but this adds an extra element to the album at virtually no cost to the listener.

Everything on Enantiodromia sounds authentic and energetic. Despite being a pseudo-debut album, the various members of Serene Dark know how to play off of each other and support each other’s sounds. Studio black metal albums can sometimes fall into the trap of sounding like they are too programmed and isolated, which usually seems to be a production issue rather than a songwriting one. Here, the tracks all sound like the band actually had fun playing them, rather than like solemn and brittle rituals intended to invoke the traditions of the music as set forth in the holy books of Emperor.

Unfortunately, Enantiodromia lasts for way too long, and nothing justifies the length. Any three songs at random could have been cut and the album would have been much better. It’s not that the album as a whole is overly long, it’s just that everything sounds similar enough that I grow weary of what Serene Dark is trying to do long before they are ready to be done. As a corollary to this, none of the songs seem essential, and none rise above the rest. The band boast an impressive array of black metal influences, but they all seem to be jammed in every single track. As a result, nothing really grabbed me the way the best albums do. Even though there wasn’t anything wrong with Enantiodromia, I don’t feel a need or excitement to return to it.

Was Enantiodromia worth listening to? Sort of. It was enjoyable enough to go through, and its flaws were relatively minor. Although it didn’t quite reach that top tier of music that’s getting more crowded by the day, it didn’t feel that far behind, either. If you’re the type of person always looking for new sounds, this should definitely be on your radar if it isn’t already. If you’re the type of person who wants to sit with only the best music and let it really sink into your soul, Serene Dark will best be avoided.