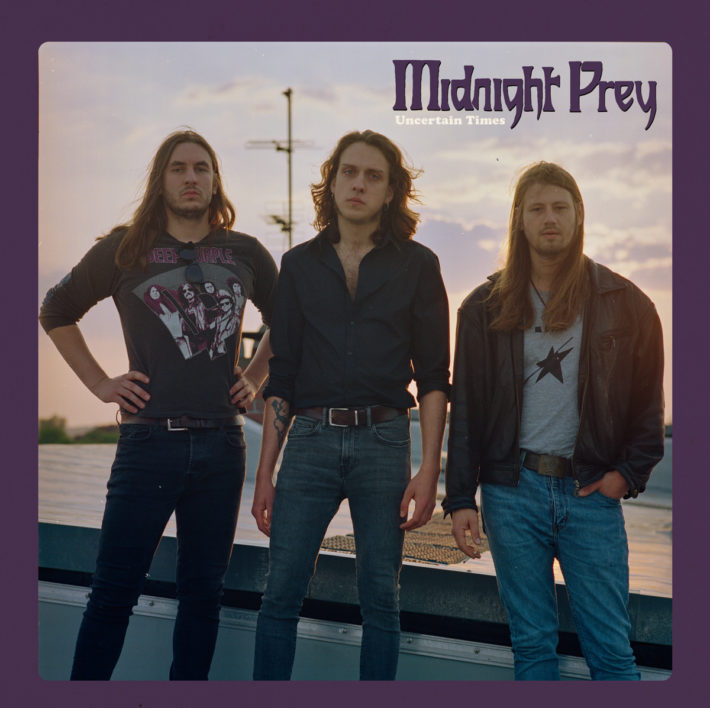 What’s more important to your listening experience, technical prowess or emotional resonance? Ideally you’d have both, of course, and the best albums give you both. But not everyone has the talent or the time to make an album that checks all the boxes. Entire metal subgenres have been formed because musicians got bored with the soulless wankery of their predecessors, and then have subsequently lost their own musical heart as well. Midnight Prey takes a different route for better and for worse.

Midnight Prey is a three-piece German blues rock band, who play with a heavy emphasis on simplistic riffs and emotional honesty. Their sound is pretty stripped down, and their song structure doesn’t significantly differ from other bluesy hard rock bands that you’ve heard over the last fifty years. A lot of the guitar playing is reminiscent of Ritchie Blackmore. The vocals are Robert Plant and Janis Joplin influenced.

Unfortunately, the band does not have the ability of Blackmore, Plant, or Joplin. For large portions of Uncertain Times, it feels as if the music is lurching from side to side, barely staying on the rails. It never quite falls apart, but it definitely feels like it should have. That’s one way to make sure your listener is actively paying attention, I guess. Midnight Prey never really lose the beat, and they’re able to play syncopations with unity and confidence, so the problem is more subtle than a simple poor recording.

First, all of the band members play their 16th notes somewhat unevenly (at least they sound like 16th notes, they could be anything). Worse, they all play them differently. When just the guitarist, for example, plays a passage with unintentionally swung notes, it sounds jarring and out of place. But when multiple band members play the same rhythm, the problem becomes much worse. This issue isn’t helped by all three musicians occasionally swallowing notes. A riff will be repeated several times, and it will sound different each time due to a note getting missed along the way. These issues combine to make the music sound much more frantic and uncertain than it should.

The vocals aren’t quite where they need to be. Winston Ziller, the singer and guitarist, sings with passion, and when it works, it’s great. He is able to switch from blues growls to cleaner vocals on a whim, bends his notes with abandon, and usually gives the emotion needed to sell the music. Unfortunately, he doesn’t stop there, and keeps giving more and more emotion until he loses control.

This isn’t helped by the production. As mentioned, sometimes Midnight Prey will swallow notes or play beyond their ability. However, sometimes notes just get lost in a surprisingly muddy wall of sound. It sounds as if Midnight Prey didn’t have enough time to get proper recordings of their music. If this was released as a live album, my complaints about this album wouldn’t be as harsh, as an occasional missed note or uneven measure isn’t the end of the world. If this was a live demo recording, I’d be impressed and would be interested in hearing what the final album will be.

I have been fairly negative so far, but there are some bright spots here. Regardless of how bad the band’s performance and the album’s production can be, their passion for their craft still shines through. The emotion and earnestness with which midnight prey presents themselves keep this album listenable. They obviously care about their music, and that bodes well for the band’s future.

With all the harping I’ve done about the band’s playing, I should at least give credit where it’s due. The drumming is impressive at times, as is the bass playing. Most of the guitar solos sound great. It is unfortunate that the good moments tend to get blotted out by the bad, but they are definitely there. They just need to be more consistent.

Believe it or not, I’m excited to hear Midnight Prey‘s next project. Uncertain Times had some large flaws that prevented it from being something that I’ll spend too much time with, but the band has proven that they’re able to pour emotion into their music and have it transfer to the listener. Hopefully, more time playing together and another shot at recording with more experience in the future will translate into a great album. For now, though, that’s just an optimistic prediction.