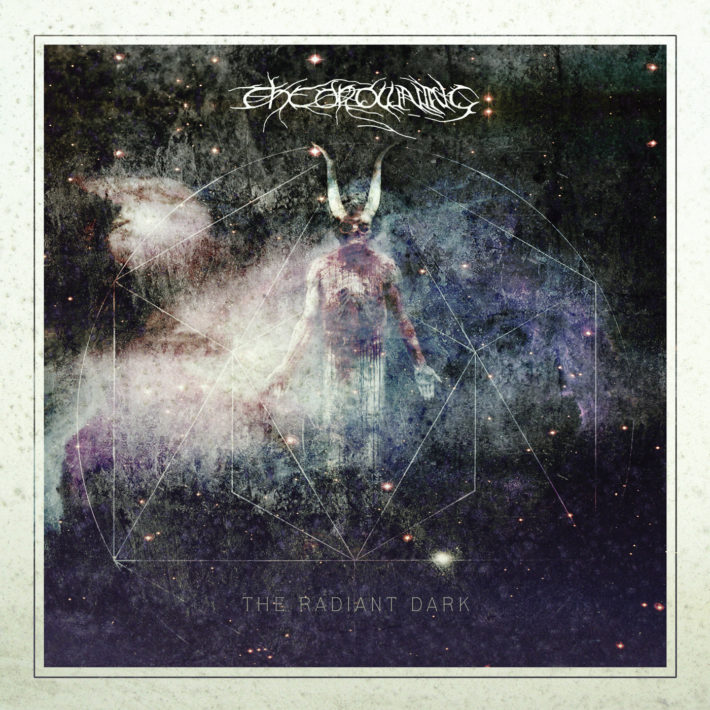 There are many questions that plague the minds of humanity.  When we look up at the night sky and gaze upon the black space in-between the stars, we begin to wonder. What is out there? In the void of emptiness, might there be other worlds and civilizations? Or is the cold vacuum of space merely that, a macabre pit of nothingness that extends forever to the horizons of infinity?  Such is the sentiment captured by The Drowning’s album The Radiant Dark. The UK-based death/doom outfit return with their fifth full-length album.  I first heard The Drowning on their split album with My Silent Wake several years ago and was impressed by their cohesiveness and infusion of thrash metal elements into their core death/doom sound. The band has flown under the radar for the most part, but their latest effort should turn some heads in the right direction.

The Radiant Dark begins by worming its way into the listener’s consciousness with the instrumental “Alpha Orionis.” This track sets the tone of the record as waves of melody surround the listener like the softly ebbing tide. As the waves crash into the shore, they build into a crescendo that becomes “The Triumph of the Wolf in Death.” The waves pound relentlessly as bone-crushing riffs pile into one another. This track hearkens to traditional doom bands like Paradise Lost or My Dying Bride. Accompanied by ferocious growls, the almost 10-minute song promises nothing less than greatness.

“Prometheus Blinded” increases the pacing of The Radiant Dark and draws upon the band’s thrash and death metal roots.  The juxtaposition of black metal shrieks alongside the band’s traditional death growls enhances the impact of the thrashy riff at the end of the song. The Drowning shows a strong penchant for enshrining their sound with sundry melodies, and “In Cold Earth” is no exception.  In my mind, the hopeful tone of the guitar riffs speak of a wandering soul uplifted from the troubles of the world, journeying through the mists of time.

With a name like “All that we need of Hell,” one has visions of darkness and flames.  However, it is one of the most melodic tracks on The Radiant Dark, with sweeping guitar riffs framed above demonic growling.  This song reminds me of the death/doom band Dalit’s underrated album The Descent.  The guitars truly shine on “All we need of Hell,” writhing like coiled serpents that eventually untwine as The Drowning implements a ritardando that results in deliberate, disruptive riffs. “Harrowed Path” fails to impress quite as much as other efforts on The Radiant Dark.  The guitar pattern at the end of the song is more reminiscent of hardcore, and while I appreciate experimentation, it feels a bit out of place.

The final two tracks on The Radiant Dark fall like Thor’s mighty hammer Mjölnir, stunning the listener with their scope and grandeur. The Drowning manages to make these longer songs varied and interesting through lush musical landscapes filled with both heaviness and melody.  “I Carve the Heart from the Universe” may be the definitive masterpiece of The Radiant Dark.  It features riffs as strong as Atlas’s majestic shoulders, acoustic melodies as captivating as those that descended from Orpheus’s lyre, and vocals as commanding as those that thundered from Zeus’s mouth.  All rhetoric aside, “I Carve the Heart from the Universe” is the crowning achievement of the album and I can’t stop listening to it.  The final track on the album is “Blood Marks My Grave.” It begins with nuanced melody that blossoms into roiling guitar riffs. With its focus on intertwining atmosphere, muted spoken vocals, and melodic yet heavy riffs, this track recalls Agalloch’s The Mantle.

I chose to review this album because I recognized The Drowning’s name and was interested in some of their past material. However, I was pleasantly surprised by how much the band has matured since the first few albums that they released.  The Drowning far exceeded my expectations.  The Radiant Dark is a death/doom masterpiece with very few flaws. The more that I attempt to examine it beneath the microscopic lens of my musical understanding, the brighter it shines, like a rough diamond that has been cut and polished to perfection. As the bright colors of fall fade and the stinging bite of the colder months descends upon us, The Radiant Dark is an excellent choice for a soundtrack that reflects the bleak, brooding pall of winter.