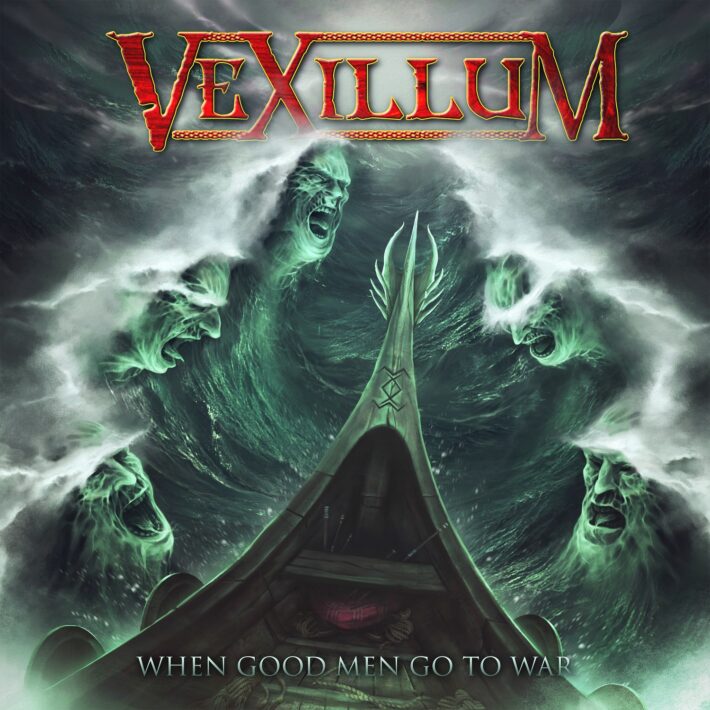 One peculiar characteristic of power metal is that a huge amount of it is just plain bad, and a smaller part is insanely good; also, most of the times when it is not terrible but not good either, it ends up being the most forgettable thing you could ever try to listen to. This is, obviously, not unique to the genre but I think that this lack of middle ground is particularly pronounced in power metal.

This being said, where does the fourth full-length by Vexillum fit in this narrative?
Well I’m extremely happy to say that it goes straight into the good part, but the interesting bit is why it goes there.

See, this album is basically Rhapsody meets Freedom Call with a hint of Blind Guardian. It’s actually pretty standard; at first sight (or better, at first listening) I didn’t find anything extraordinary about it, but simultaneously my attention never dropped and the music never faded into the background, and if by the third track I was intrigued and excited, by the time the album was well past its half I was in love with it.
These guys do not do anything new, but they don’t play a collection of cliches either – and I think that’s the key: they simply join a well-established tradition, and they do it damn well. There’s a somewhat fine line between being traditionalists and being copy machines, but they manage to avoid the risk, while still making their influences clear. After all, not being inventive or new is not a crime – it’s impossible for everyone to be able to be always innovative. The target is to sound good and be entertaining even if you’re not making anything new, and Vexillum has hit bullseye.

When Good Men Go To War is made up of eleven songs, for what is just about an hour of music. The first four songs are one great song after another, which in my book would already be sufficient for an album to get a pass.
Enlight The Bivouac, the opener, is a melody-driven song with a great cooperation by guitars and keyboard. Sons Of A Wolf is a bit more traditional, with less melody and the all-too-familiar chorus with just double-kick bass drum in the behind; perhaps it is for the best, because had this been as melodic as the former, it might have been too much for a start, so it’s a welcomed pause before the next attack. The solos really shine in this one, as they aren’t obscured by previous melodies.
Then it comes Voluntary Slaves Army, featuring a military rhythm right off the bat, and again we’re driven by melody and this marching rhythm; the vocals do feel a bit buried in the mix, as opposed to the other bright-sounding instruments, but it’s still a very solid song. The last piece of this killer quadruplet is When a Good Man Goes to War, the almost-title-track: again, melody-driven though not as much as the first one. The chorus is extremely Freedom Call-y (it’s worth mentioning that Francesco Ferraro, the bassist, has been Freedom Call’s actual bassist since 2019) and I love it: it just trains the whole song, it forces the listener to sing along, it’s exciting and fun and that’s exactly what I want from this kind of release.

The next songs are somewhat less remarkable, and the central section of this album is a bit weaker, but it’s praiseworthy that if this is the lowest they can go in terms of awesomeness then it’s still a high that many bands do not manage to reach at all. Even the most uninteresting songs redeem themselves either in the chorus or with a nice solo – this means that every song has at least one interesting element, and there’s really no bad song. This, to me, is the mark of an album that comes close to perfection.

Flaming Bagpipes is another successful hit: because everyone loves bagpipes. Just ask Grave Digger – even if you are from a country that has absolutely nothing to do with Scotland, you just can’t help but love bagpipes – it’s kind of like Norway and snowfalls if you’re in a black metal band. And our Italian heroes do not make an exception to this rule, with this song that starts with a compelling bagpipe riff and with lyrics about war and battlefield; the riff is actually pretty good, and the chorus too: the result is possibly the most playful song on the album.
Then there’s The Tale of the Three Hawks, and did I just say – this second half isn’t as strong as the beginning? Strike that. This song starts right off the bat with a majestic riff that hits like a shield wall, and it features a question-and-answer verse with a galloping rhythm as a background, and it sounds fantastic; all the elements click together, and the result is what I think it’s the best song of When Good Men Go To War.

The final special mention goes to the final track, Quel Che Volevo (meaning What I Wanted). It’s the song I was interested in the most – the one song in Italian, my native language. It turns out it’s a power ballad – the perfect thing to end your album with, but it’s also a rather particular song: with its lyrics about our lady death and its medieval/Renaissance atmosphere, Blackmore’s Night may the first influence to come to mind, but who Vexillum are actually reminding me of is an accomplished Italian master of medieval music, Angelo Branduardi – an artist already referred in a similar way by Rhapsody Of Fire (both Italian bands, not a coincidence) with Old Age Of Wonder and, more directly, March Of The Swordmaster. This song was truly a surprise, the cherry on top of a great album, and a nice farewell to end this adventure we’ve been though together.

I really enjoyed this album – and if at this point you are tired to read this, I understand. But it’s just the truth, it’s one great album, and the fact that it’s so good without inventing anything new makes it even more impressive. Even the mixing is good, with crisp guitars, polished keyboards, and a well-balanced drum sound; however, they could have done a better job on mixing the voice: at times, it feels weak and feeble, especially amidst the other, much more powerful, instruments. This is probably the only actual fault I can find on this album; as much as I have enjoyed it, it would be dishonest not to mention this downside.

A final aspect of When Good Men Go To War that I’d like to emphasize is that it sounds very accessible to pretty much everyone who like even tangentially power metal. It’s feel-good without being too cheesy, it’s fast without being breakneck fast. It has its mild dose of fantasy but it’s not neck-deep in its own lore. In other words, it’s a part of the recent current of heavy/power metal à-la Powerwolf, with the power metal aspect tuned up, but not quite to eleven. It’s aggressive in its own way, without being harsh. It’s not explicitly written to be happy and funny, especially if you read the lyrics, but it sounds like fun, happy and joyous, but in a way a bunch of adventurers going to war as soldiers of fortune might be.

In conclusion, this album is an extremely solid release which checks off all the right boxes – just listen to it, and you won’t be disappointed: it’ll gift you a great hour of music, plus countless future moments whistling its tunes.