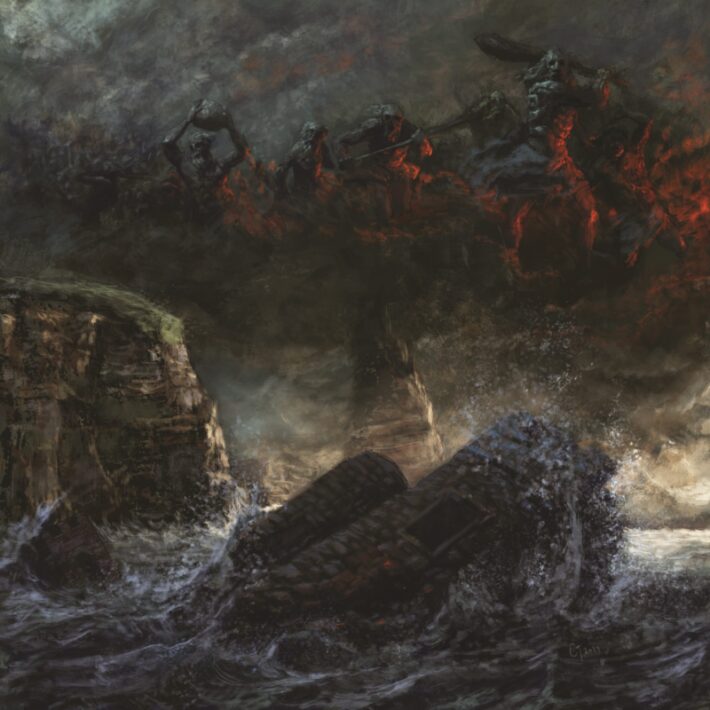 Coscradh, meaning “massacre” in Old Irish, formed in 2015. This black/death metal band follows in the footsteps of other similar Irish bands, namely Malthusian and ZOM. I was immediately excited to grab this album, as with names like Ciarán Ó Críodáin and Hick O Aodha in the band, I was really hoping for some uniquely Irish identity. Unfortunately, outside of reading the lyrics, I was left mostly underwhelmed on that front.

The album’s title, Nahanagan Stadial, is the Irish term for the Younger Dryas, a geological event that occurred 10,000 years ago and would last for roughly 1,000 years, plunging much of the world into a mini-Ice Age. According to legend (and the promo material), a massive rise in the oceans blocked out the sun, as solar flares hit the planet, overturning civilization and rendering life extinct. Of course, the archeological evidence suggests it wasn’t nearly as dramatic, but still saw significant glacier movement and temperature drops across the world. After the end of the Stadial, the British-Irish Ice Sheet would melt away completely.

Like the legends described, this record is perpetual destruction. The title track builds into a mid-paced stomp of heavily distorted riffs. Towards the back half of the 10-minute opener, the drums take off into a gallop, and the reverberated howls enter the soundscape. “Feast of the Epiphany” has a bit of a groovy swagger to it thanks to some varied drum work. Some minor chords and dissonant tremolo riffs on “Plagues of Knowth” show they haven’t forgotten about the black metal side of their sound.

The last two tracks, “Cladh Hàlainn” and “Feallaire Dóite”, feature lyrics in Gaeilge, Irish Gaelic. The promo material claims they speak the “ancient language of South Uist, Gàidhlig”, but Gàidhlig refers specifically to Scottish Gaelic, and South Uist is part of the Western Isles of Scotland, so I believe the promo material is mistaken. Either way, it’s cool. Honestly, you weren’t going to pick up on the language of the lyrics without reading them anyway. Unfortunately, these tracks don’t quite do enough to differentiate them musically either, as “Cladh Hàlainn” especially feels like it needed more variation in the riffs. “Feallaire Dóite” builds up into a tremolo-picked destruction that gallops along, and more variation on this song helps to end the album on a strong note.

Part of my issue with this record lies in the similarity of the writing between songs, but it’s also partly due to the somewhat washed-out guitar sound. Their writing features hard-hitting riffs and cutting tremolo sections, but the messy guitar sound seems to undermine their efforts. Their sound is a bit similar to Concilivm from earlier this year, but the production on Nahanagan Stadial lacks the hard-hitting dynamic depth I wanted. Still, there’s promise here – and what’s present is far from bad. The chaotic vocal performance adds to the menace in a great way, and the drumming manages to keep everything from going off the rails. I’m looking forward to hearing what these guys can do in the future, because I think they still have room to grow.